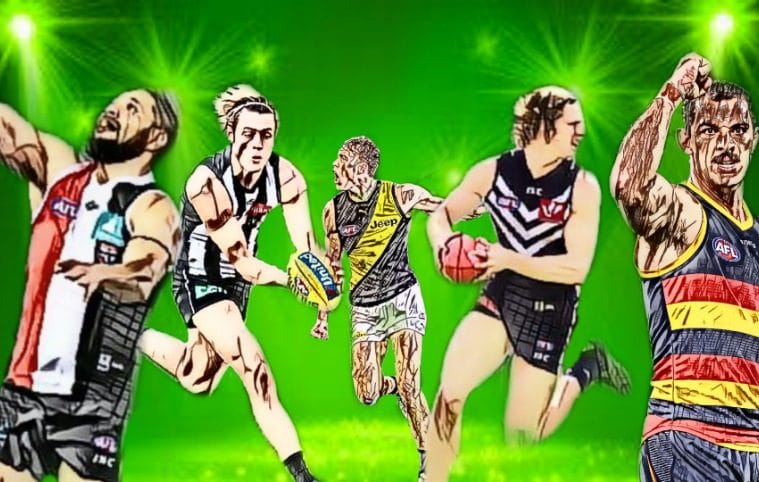 In The Spotlight – Round Ten

Welcome back, everybody. After another week of football filled with highs and lows there were some players under the microscope that certainly delivered this round. Let’s take a look first at last week, in the best-performed round yet, then we take a look at some more players that are “Under The Spotlight…

James Frawley: 13 Disposals, five marks
92% efficiency disposal was a great result in his first game back, and he should be a major factor later in the season

Aaron Hall: 28 Disposals, six marks, three tackles
Complemented the inside midfield outstandingly, also worked back hard into defence, which is not normally a string in his bow

Sean Lemmens: Eight disposals, one mark, one tackle.
Gave up three goals to Charlie Cameron, however, he did as much as any defender could with the quality of forward 50 attack by Brisbane

Dustin Martin: 28 Disposals, one mark, one tackle, 4.2
Lethal up forward once again… though 46% disposal efficiency was only acceptable due to scoreboard impact. Needs to impact defensively until Tiger reinforcements arrive

Zac Williams: 19 Disposals, three marks, two tackles, 0.1
Returned to half back and was more effective. 84% efficiency and led Carlton with seven intercept possessions.

Richmond have a ton of firepower missing from their midfield, that part is indisputable. As a Suns fan I have watched Tom Lynch closely throughout his career and to say he is an antagonist would be putting it lightly. He comes up likely against Harris Andrews, the best key defender in the AFL, and I want to see if he can impose himself on this contest, and match-up (by actually playing the ball)

In perhaps an unpopular opinion, Lynch has taken a backwards personal step since going to Punt Road, but I’m guessing the team success supersedes that. However, at times he almost seems to be going through the motions. With Richmond in the eight by a game and percentage, but three teams close behind, they need to make a statement against the surging Lions.

I look at this game and I’m not sure I see a match-up that suits Mitchell at all with regard to pace, size and physicality. Since Carlton have adopted an outside run approach, they have traded grunt for pace, and that could spell disaster for Titch. Obviously, he is one of the most gifted ball winners in the competition, however, the jury is out on whether he is damaging with his touches (ironically the same talk that has been raised about Patrick Cripps).

There’s no question Carlton will likely send Ed Curnow his way, and that could spell trouble as the veteran blue is one of the hardest working two-way midfielders in the game and is also thriving in the scheme change.

The former Cat returns to his club which he began his footballing journey with back in 2011. Smith has been recovering from a PCL injury and after a few weeks in the VFL, returns for a team that was just obliterated by Brisbane. Smith did not look overly mobile in the VFL, however, his main priority would be to aid a midfield that has been smashed in the ruck since losing Jarrod Witts.

Pinch hitters Chris Burgess and Caleb Graham had been filling admirably, however each won only 20% of ruck contests and even more telling was that Graham averaged onr hit-out to advantage every 12.5 ruck contests, Burgess one in every 16.5 (roughly 8% and 6% respectively)

Smith will likely struggle around the ground however watch for Burgess to play forward as an offensive ruck, allowing Smith to rest and set up behind the ball. This contest will also perhaps work out Geelong’s ruck division, which has also faced issues.

Rested last week, The Big Texan comes back to face off with the league-leading Melbourne Football Club. For Tex to be effective the Crows must give him as many 1-1 opportunities as possible and limit the intercept defenders, as, even if Walker is “off” he can very quickly shift momentum and get his forward line up and going. The ask will be very tough especially if he is taken by Steven May, however, Taylor Walker is more than capable of playing a lone role up forward, to devastating effect.

Rowan Marshall has succumbed to yet another injury, leaving Ryder with a ton of work to do to get the St Kilda midfield up and running. The 33 year old has had a great effect on the team since returning, but he also has had his niggles. Brett Ratten has called on Shaun Mckernan to aid Ryder, but Marshall has been very good for the Saints when he has been able to stay on the park and will be tough to replace.

The Bulldogs go into this game without Tim English or Stefan Martin, so will turn to Zaine Cordy and Jordan Sweet. The Saints will be licking their lips at this match-up, so watch for their midfield to come out in attack mode from the opening bounce

In a match-up of two teams that pride themselves on the inside ball, I can’t wait to watch the likely match-up of Fyfe v Parker. I’m not sure if many people have noted this, but the discrepancy of Fyfe favouring handballs over kicks has been creeping up the past few seasons, and at a difference of four handballs more than kicks, it is the highest in the past four seasons (at least)

This trend change may have something to do with Fyfe having uncertainty around goals, however, his hands remain as deadly as ever. He needs to make sure whatever opportunities he gets up forward, he takes advantage of them to the maximum, as Sydney won’t give many.

Imagine if GWS actually used him in defence as the preseason reports suggested…..

Hogan is coming off his best game in years, taking nine marks and kicking four goals from 16 disposals against Richmond. West Coast will give him a much tougher test, however, the Eagles rely on getting numbers up to affect the contest and they can be broken down by getting isolated one on one, which also plays to Hogan’s strengths.

On a personal note, I’m glad to see him back on the park and looking like he is enjoying things, going back to what he does best. He will be without Toby Greene and Harry Perryman due to injury, however, Jeremy Finlayson returns to add some much-needed firepower.

Seriously… How great is it to watch this guy apply his craft once again?

Not only did his return to Centre Half Back revitalise his season, it also coincided with a return to form of running mate Brayden Maynard. In the “Battle Of The Bars” Moore will have his hands full, trying to counter a sizeable Power forward line. Who he mans-up on would be anybody’s guess, however for Collingwood to have a sniff, Moore will need to be the best player on the park, which is not out of the realm of possibility.

It shall be an enthralling battle, and we will find out if Port will add to the Magpie misery of 2021, or if Collingwood can actually tear them apart.

On the record, I love the way Cam goes about it, Hard, Fair, bit of a w***er but always the first to put the body in. Coming off a four-goal haul in the Roos first win in over 12 months, and into a clash with the Bombers, watch for Cam to put Heppell or Hind under as much physical pressure as humanly possible in this tussle.

A few weeks ago I noted that Zurhaar had an impressive impact in the midfield – perhaps that could be on the cards in a few short bursts, especially with Bombers enforcer Jake Stringer out injured. Even if he doesn’t get to hit the scoreboard in the contest, one of his bone-crunching tackles or hits can changer the momentum of any game.