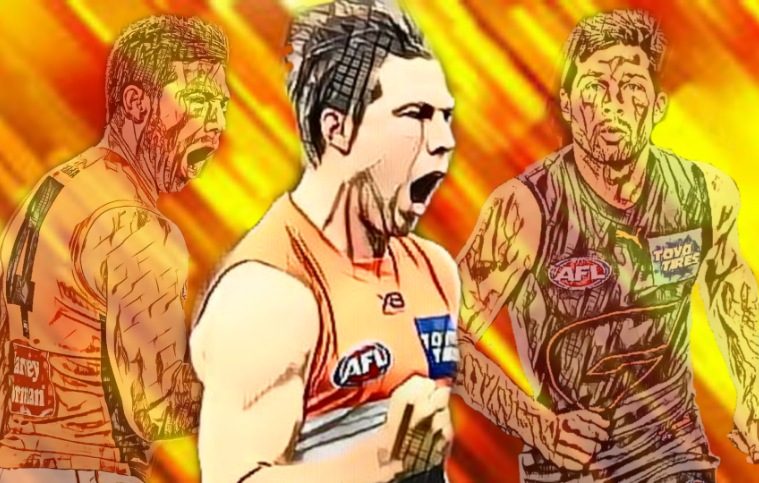 In Defence of Toby Greene

Over the past few decades, research has been conducted on referee bias. Factor such as home ground advantage, star quality, race and reputation have been investigated. And while certain elements, such as a player’s race, have been historically proven to influence decisions (In the NBA, this was overcome through training and education), others haven’t been confirmed either way through hard data.

And while referring to one instance doesn’t necessarily equate to the whole, the reputation of Toby Greene, and in particular the view he is a dirty player, works against him in decisions in our own AFL.

There is definitely an historical precedent when it comes to Toby Greene. Toby has had a pretty extensive rap sheet that hasn’t been kind to his back pocket, with the mid-szied forward racking up numerous charges, fines and even a lengthy suspension for drinking while injured.

But that escalated to a new level during the 2019 elimination final. While the intent to ‘rough up’ the Dogs was a successful tactic, gouging the eyes of Bontempelli was an unacceptable act on the footy field and deserved a sanction, which he somehow avoided until he did it again… the very next week.

Ever since, it seems he’s been getting the unfavourable end of the whistle, especially when opposing teams illegally inhibit his movements or line him up. The incident that saw Nathan Broad drive him into the ground, injuring his shoulder in the process, was not awarded a free kick, and even the final play in the game against the Tigers was questionable, as Greene was tripped while going for the ball and it was called play on.

Adjudicating by reputation is no more apparent than the studs up rule, which is informally known as the Toby Greene rule.

Sure, we don’t want players becoming injured by copping a foot in the head, but alternatively, we want the officiating to be the same across the board. Pinging Toby for the rule while others employ the same manoeuvre (Riewoldt, Howe, Kennedy) and are not penalised for doing it to create space is a clear contradiction. It’s either a rule that is universally adhered to, or it’s not a rule at all – targeting one ‘dirty’ player can definitely be argued as a case of bias in sport. The fact that the rule is unofficially named after a player is a pretty clear indication that it’s a flimsy rule that probably has no place in the game. If they kick a player in the head, it’s high contact and should be awarded a free. Studs in the back? I’m less convinced of this.

Ever since the gouging incident, Toby Greene’s on-field behaviour has improved. Less controversy and fewer charges. And what’s more, he has stepped up in terms of leadership, especially in the absence of Coniglio – I would even go as far to say that he the real leader of the team. This is evidenced not only by his long-term signing, but because when the game is in the balance, it’s usually Toby Greene in the action trying his best to drag the team across the line. While that doesn’t necessarily mean that Toby should start getting a favourable end of the whistle, it washes away some of the mud that has been slung his way (much of which was his own doing).

It will be interesting to see how GWS perform on the weekend sans their best player. I suspect it will create a void both from a leadership perspective, but also remove a certain je ne sais quoi around the contest.  I wouldn’t be surprised if the margin is substantial in West Coast’s favour, regardless of the Giants’ recent good form.

What do the numbers say?

Surprisingly, Greene’s 2021 has seen him receive a pretty good run from the umps overall. Collecting 17 free kicks (equal sixth in the league prior to Round Ten), he has given away just 14 this season. In his ten years in the league, Greene has had favourable results from the umpires in five seasons. That, however, is not the be-all and end-all of the discussion.

We may be looking through lenses coated in recency bias, but you tend to remember the ones they didn’t pay. Potentially game-changing decisions. Would the umpires have permitted Scott Pendlebury to be buried the way Broad buried Greene? Or tripped the way Grimes tripped him? How about Dusty? The whistle would not have been in their mouths fast enough!

Is there a solution?

In the NBA, they actively seek to discover and remedy bias on the court. NBA referees are probably the most scrutinised officials on the planet, not only by spectators and the media, but also by their own organisation. Much of this stems from the betting scandal in which former referee, Tim Donaghy bet on games he was officiating in.

Umpires in AFL could definitely step up their awareness of potential bias. I believe if they were completely honest with themselves, that Greene suffers from reputation bias, despite turning around his behaviour in recent years.

It’s a real shame too, because he is one of the best players in the competition that is largely overlooked because of his reputation and geographic location. If he played for one of the big Victorian teams, he’d be lauded, perhaps even more so for his mongrel, which can be such an asset when harnessed in a constructive way.