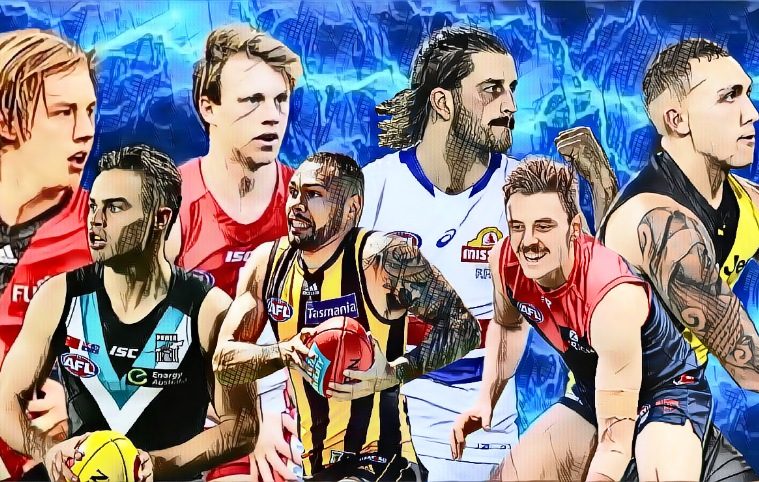 It’s a word that is used to describe dozens of players in the AFL at any given time, even those who have received such recognition as a Best and Fairest Award, or selection in the All-Australian team, it seems.

As such, it becomes rather dangerous to label players as underrated. What you get are supporters of any particular player falling into one of two camps – they’re either happy that the player is getting some sort of recognition, or they get annoyed that the player is someone they’ve rated all along, and accuse us of being slow on the uptake.

Well, whilst I will readily admit I am slow on the uptake of many things, one thing I will do is stick my neck out and incur your wrath here and there. Maybe that makes me even s-l-o-w-e-r than the average writer at The Mongrel? Perhaps the slowest?

Putting together a team of underrated players seemed like an easy thing to do. It’s amazing how often things seem that way, and turn out to be quite difficult. As said in the opening, there were dozens of players that could be considered underrated for a variety of reasons, so it was important to have some kind of criteria they had to fit within.

Here’s what I came up with to simplify things.

1 – The player must not have been named All-Australian in his career. See, that’s Brad Sheppard out, even though I still hear people call him underrated quite often.

2 – The player must not have finished in the top three in their club’s Best and Fairest in the last three seasons. That’s Jarryd Lyons out – Brisbane obviously rate him pretty highly. Libba as well. He’s out of the running.

3 – The player must be at least 23 years old. That rules out blokes like Bailey Smith, Aaron Naughton and Oscar Allen. Do you know anyone who doesn’t rate them? They can be content with the 22 under 22 Team the AFL does.

4 – The player must not be a part of the Rolling All-Australian team compiled every week for The Mongrel by the devilishly handsome Matt Oman. If you’re in the Rolling AA team, you can’t be underrated, can you?

And from there, we can start to formulate our team. However, before we do, I must make it clear that we are compiling this team based on form in 2021.

This was tough – a heap of high quality names missed out on selection, but in the end I am pretty content with this selection as our back six.

Jones has done the heavy lifting for Jacob Weitering the last two or three years. No knock on Weitering, but he actually gets the recognition. Jones does not. Keath has taken on massive jobs this season and has really developed his one-on-one defensive work to the point he is matching it with the biggest forwards in the game.

Brayden Maynard is one of the most versatile defenders in the game, as we witnessed with him taking on Buddy Franklin head-to-head while being far from a key position player. Meanwhile, Jack Ziebell has been trying his absolute best to hold together the North defence without Robbie Tarrant, Aidan Corr and Luke McDonald. Nick Hind has been the remedy for the Bombers allowing the disenfranchised Adam Saad to wander out the door, and Jake Lever… well, he is the best intercept man in the game at the moment, and one of the keys to the Dees’ defence.

At the conclusion of the article is a list of other defenders that could have/should have been included.

I opted for genuine wingmen in this team, as they are too often overlooked. Amazingly, it was tough to select Amon and Seedsman over Brandon Ellis, who has done a mointain of work at Gold Coast over the last two seasons.

Darcy Parish is developing into a star at Essendon, Callum Mills has made the jump into that category in Sydney and Mitch Duncan… well, this team was made for him. The fact he has never been an All-Australian is a borderline crime.

A couple of other mids make it onto the bench, but I won’t be slotting any in on the half forward flank. I’ll leave that up to the AA selectors – it’s what they’re good at.

A little bit top-heavy, but hey… it’s a fantasy team. Fantasize that a couple of them are a little bit smaller and that should get you through the rest of the day.

Fantasia has been wonderful for Port and is their most potent small forward to this point of the season – I did not expect to be writing that at any point in 2021. He’s proving me wrong. Bayley Fritsch plays the hybrid forward role perfectly. He has great hands and his kicking at goal seems to be vastly improved. Shai Bolton, prior to his wrist injury, was playing the pinch-hitting forward as well as anyone in the game.

Of the bigger guys, TMac is on a mission of redemption and is becoming a feared forward again for the first time since 2018, Josh Bruce has done the work in the off-season and continues to kick goals on pace for a huge increase on his personal best, and Matt Taberner continues to be as consistent as they day is long. In summer… not winter, when the days are shorter.

Actually, on Tabs, I reckon it’s about time he got himself a bag of seven or eight to make the whole league sit up and take notice. Two or three per week is nice. The occasional four is good, but he has lacked the big statement game. I’m looking forward to that – it may be the difference between an AA-selection and another year of being in the underrated team at season’s end.

No other choice, here. Hickey could very well be the AA ruckman if he continues this form. Yes, Max Gawn is the clear front-runner, and Nic Naitanui is always a threat, but the consistency of Hickey has been a real highlight for the Swans.

The two mids – Ben Keays has to be close to the most improved player in the game over the last couple of seasons, and would be the poster boy for taking your second chance and running with it. Meanwhile, Adam Treloar is chugging along, doing what he does as part of a winning team, and flying waaaaay under the radar. Of course, that has been made easy by having Bont, Libba, Macrae and Josh Dunkley for a while, playing beside him.

Jarman Impey is back in the swing at half back for the Hawks and looks really happy in this role, whilst AMT was unlucky not to be in the starting 22. Then again, there’s not much difference between starting and being on the bench in a fantasy team with fantasy rotations and so on…

Aaaaand cue the “what about so-and-so” questions. Go on… you know you wanna!

This is by no means definitive. I threw it out there to my fellow Mongrels to help me populate and this seems to be the best mix of players we could find. Could we have added others?

Of course we could have. The criteria made it a little easier, but there were still a heap of players I could have thrown into the mix.

Sam Menegola, Nathan Broad, Tom Doedee, Liam Baker, Dougal Howard, Ben McKay, Brody Mihocek, Brandon Ellis, Hugh Greenwood… how many more do you want me to throw out there until I hit the player you wanted in most?

So, off we go – who is missing, and who should be nowhere near this team? I’m all ears. And don’t forget… if you’re advocating for someone to be included, you probably should flag the player whose place they’re going to take.

And hey, if I have made an error here or there, don’t make a federal case out of it. I have an edit button – help me use it. 🙂