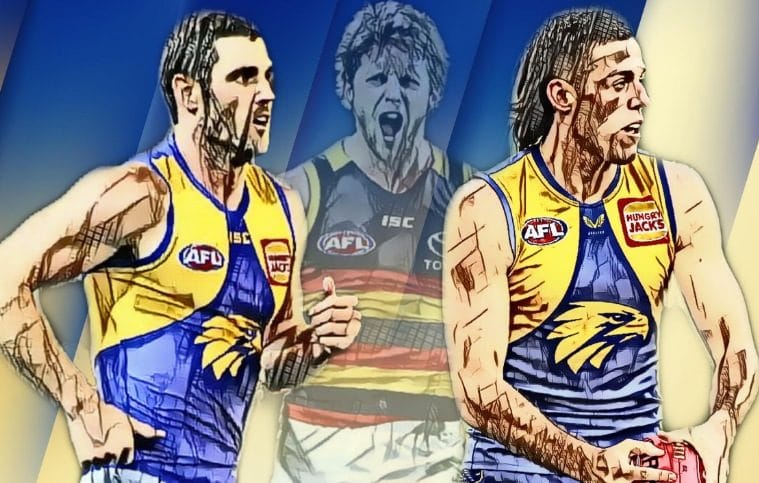 A Not-So Quick Yarn About West Coast and Adelaide

Earlier this evening, Adelaide made the trip West to meet with the Eagles at Optus Stadium.

Knocking off West Coast at home is difficult enough at the best of times, but on this occasion, the young Crows faced the daunting task without the added benefit of their main talisman, Tex Walker, who was rested after a dip in form.

The game was an important one for the Eagles, who needed to win in order to stay even in terms of points with the likes of Geelong, Brisbane, Port Adelaide and Sydney. Meanwhile, Adelaide was hoping to break a streak of four consecutive losses following its hot start to the season.

Welcome to a not-so quick yarn.

The first term was an arm-wrestle. West Coast drew first blood but Adelaide matched every blow and the two sides went into the first break at two goals apiece.

The second term was a tale of two halves. The Crows came out firing and took the lead from West Coast with two early goals but their ascendency was short-lived. Spearheaded by five goals from Jack Darling, the Eagles stormed home in the second half of the term and went into the main break with a five-goal lead – a margin that proved to be the difference.

Adelaide fought hard during the second half, managing to trim the margin down to 17-points midway through the third term, but lacked the polish to convert its opportunities while West Coast had no such trouble.

Roughly ten minutes of football made the difference in this contest and that difference came courtesy of Jack Darling. His five second-term goals allowed the Eagles to take hold of the game and there was no way back for the Crows. It was a mammoth effort from a forward who is at the peak of his powers and his individual brilliance in this one shone brightly above the rest.

In general, season 2021 has seen a return of some slightly more old fashioned key forward dominance and it’s hard not to get excited about the prospect of even more big hauls in the future. Five goals in ten minutes bodes well for the remainder of Darling’s season. His tally now sits at 26 goals for the year and more games like this will hold him in good stead for a dash at the Coleman. He also deserves a shoutout for a very unconventional dribble-kick goal which nutmegged a befuddled Brodie Smith – sometimes it’s just your day.

It’d also be remiss of me not to mention the overall excellence of the Eagles forward line. Darling put together a quick-fire highlight reel but the likes of Jamie Cripps (two goals, 25 touches), Josh Kennedy (three goals), Oscar Allen (three goals) and Jake Waterman (two goals, 12 marks) all contributed to a brilliant effort from the forwards out West.

When playing in a forward line with the likes of Josh Kennedy, Jack Darling, and exciting young prospect, Oscar Allen, it’s easy for young Jake Waterman to be lost under the radar. The hybrid-forward wouldn’t have been the first name on the Crows scouting report but he proved in this match-up that he is worth some serious defensive attention. As outlined above, two goals and a whopping 12 marks were products of a stellar day for the Eagles’ forward as he assisted in seven score involvements and controlled the action across the West Coast half-forward line. Waterman ran his man ragged and was rewarded for his impressive work rate with plenty of footy. Under the tutelage of a veteran star like Kennedy, it’s no wonder Waterman is improving.

Not quite a household name yet (unless you count that of his old man, as well), but I’d be willing to bet that just about every Eagles fan went home singing Waterman’s praises – the next step is consistency.

It’s no surprise the Crows went into a bit of a skid following Rory Sloane’s injury in Round Three. Sure, they defeated bottom dwellers North Melbourne the following week, and yes, they are yet to win since his return in Round Eight, but in this matchup, you could really see his importance to this young Adelaide outfit.

Anyone who watched the game would rightly say that the Crows battled manfully. They never bowed their heads and didn’t stop trying until the fat lady sang. But who cares right? They lost by five goals.

Wrong. Adelaide played this game out with the right attitude and that’s important. It’s easy for a side to fall away and pack it in once the result is determined, but it’s hard to keep fighting when you know you’re in a losing battle, and that’s what the Crows did – they kept fighting and refused to go quietly into the nigh… err, maybe the late afternoon.

Sloane has made it clear that he is committed to the rebuild and wants to show his young teammates exactly what it takes to succeed at AFL level. Today was an example of that, he talked the talk and set the standard. The Crows skipper battled for clearances until the end, he chased hard all day long and with two minutes left to go, he tackled with the same ferocity he showed in the first two minutes of the game. The Crows aren’t good enough to beat every side and won’t make finals this year, but instilling a mentality that demands four quarters of football will go a long way towards ensuring finals come back around sooner rather than later.

In all seriousness, there wasn’t much I “hated” about this game. It more or less went to script. Adelaide tried hard and showed plenty of endeavour, but at the end of the day West Coast had too much class and took advantage of it’s opportunities when it counted most.

Some Adelaide fans may have been irked their side didn’t come closer considering it had 12 more inside fifties and managed to just about split the clearances against Nic Nat’s midfield. However, honestly, a lot of the Crows’ faults in this contest were simply a product of a young, inexperienced side up against a better, more polished one.

One thing did stick out to me though, and I take no joy in singling out a youngster like this, but gee…Darcy Fogarty is frustrating. In the absence of Taylor Walker and paired alongside number two pick, Riley Thilthorpe, Fogarty had an opportunity to pencil his name into the Crows best 22.

Alas, it was another ‘almost but not quite’ outing for Darcy. After starting like a house on fire in the first term, Fogarty was unsighted for much of the second and third quarters before re-emerging in the fourth for a tidy set-shot goal. 12 touches, four marks and a goal in a 30-point loss may appear to be a serviceable enough day, but when you factor in the flashes of potential Fogarty displays, it’s hard not to be disappointed.

One minute he monsters someone out of the way with his brute strength before sidestepping a defender and showcasing a surprising level of agility, then suddenly he’s lumbering across half-forward looking like a deer in headlights. Now in his fourth season and with six matches under his belt in 2021, it’s time to take some strides and I understand that maybe I’m being a little harsh, but it’s only because I’m rooting for Darcy – I’ve seen enough potential to know what he could become, it would be a shame if it all went unfulfilled.

Making the most of your chances was the difference today and the stats show why.

Everything else was pretty tight, showing just how much of an influence forward fifty efficiency had on the outcome.

The stats indicate that there is something to be said for the Eagles pressure around the footy, creating harder shots on goal and more under-the-pump disposals for the Crows.

West Coast will face a sour GWS side next week away from home as it looks to make it four in a row, while Adelaide will face the undefeated Demons in an unlikely bid to end its winless run at five games. Tex will likely return for the Crows and both sides got through the game relatively unscathed, with neither sub being activated.