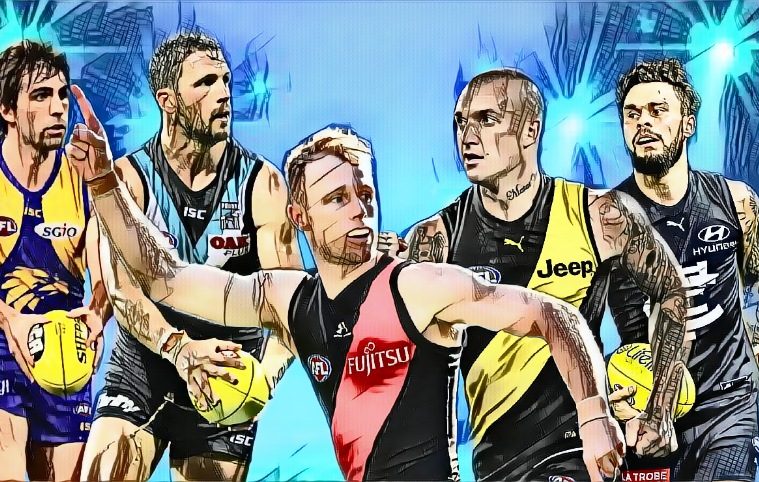 In The Spotlight – Round Nine

After a few weeks of having all my picks play, I was looking forward to another nine of my guys getting their opportunity, however, trust Hawthorn (Jack Gunston) to leave me bitterly disappointed.

Hopefully this week we see everybody make their mark one way or another..

But first, let’s do a quick recap.

David Astbury: 13 Disposals, three marks
92% efficiency was nice, however, his defensive positioning was subpar at best. Probably the most affected from Grimes not playing

Max King: 13 Disposals, five marks, 1.2
Had a very productive second quarter, but found the going tough for the other three. Hands were almost as assured as the claw carnival game.

Anthony Mcdonald-Tipungwuti: 11 Disposals, two marks, 2.0
Registered a donut in the opening quarter, stats may look ordinary however had a massive eight score involvements from his 11 touches

Jaidyn Stephenson: 19 Disposals, six marks, 2.2
Rocketed out of the gate with a goal and nine first-quarter disposals but quietened off after halftime as Collingwood took over. He will unfortunately miss around six weeks with a fractured wrist

Lance Franklin: Six disposals, three marks, five tackles
Defensive pressure was a handy throw-in, however, he looked every bit of his 34 years. Was not ready

Charlie Dixon: 14 Disposals, four marks, five tackles, 2.1
Looked imposing early with 6 touches and two goals in the first quarter, but failed to do much of anything after that. Did his part to keep the ball locked in forward 50

Sam Walsh: 24 Disposals, five marks, five tackles
Game high 38 pressure acts from Walsh (14 most then the next best) was extraordinary, struggled to get off the chain on the inside, evidenced by only eight kicks from 24 touches. Can’t fault the effort

Matt Taberner: Nine Diposals, six marks, 2.1
Looked threatening in this one, disposal let him down at times but looks to be improving.

The former premiership Hawk returns to the big time to help combat the Cats’ lethal forward tandem of Tom Hawkins and Jeremy Cameron. His defensive IQ and aerial defensive work will be crucial in this contest, especially with forcing the ball out wide to also negate the smaller forwards, who can be pretty inconsistent for Geelong.

Even if he doesn’t impact the game via the stat sheet, his presence and positioning alone can make life tough for quality forward entries.

There has been no bigger surprise in my opinion than the absolute dominance of ruckman Tom Hickey in 2021. Averaging 16 disposals, 11 contested possessions and six clearances a game, the four club journeyman has been elite on the ground, however, despite the plaudits he has gained this year it must be noted that he wins under 40% of hitouts in ruck contests he attends.

He comes up against the resurgent Brodie Grundy, in a clash that will go a long way to deciding the outcome of this game. Grundy wins just under 60% of hitouts and may cause some headaches around the ground as well, but expect both to zone off each other in general play in a long-range game of cat and mouse in a power vs finesse style clash.

The former Gold Coast midfielder has been on a tear in the past fortnight, accumulating 70 disposals in the two contests. Hall has always been a damaging attacking midfielder, and has started to find his footing after getting a more prominent role due to injuries. The main thing I’ve loved about the way Hall plays is that he is always looking to do damage with his ball use, he never gives off disposals just for the sake of it. He also prefers to kick often and can never be accused of overusing the ball.

Last week he accounted for almost a kilometre of territory gained from his 37 disposals. Despite the massive injury toll to North Melbourne, if Hall gets going they could pinch this game, and his pace could cause the Hawks a ton of headaches.

What are two things that Willie Rioli and Sean Lemmens have in common?

Their proud indigenous heritage, and that both have things in their back pocket that you wouldn’t expect to find.
In the context of Lemmens, he has transformed from a hard running half forward, to lockdown defender, and has names like Papley and de Goey as his 2021 victims. He has stepped up remarkably after the Suns lost Connor Buderick to a torn ACL, and for Lemmens, who plays game 100 on the weekend he faces the prospect of curtailing fellow indigenous excitement machine Charlie Cameron.

Lemmens is not only quick but possesses great lower body strength, which will assist him as one of Cameron’s go to moves is to shield the goal side with his body and run on to the ball over the back. It will be a very interesting contest, as Brisbane with Cameron firing, are vastly different to him being kept on the leash.

With Richmond facing the prospect of taking on the Giants without Cotchin, Edwards, Bolton and Prestia, Martin will have to shoulder a massive workload in this contest. Watch for GWS to cycle fresh legs onto the Tigers superstar, likely Jacob Hopper to begin with. Damien Hardwick may be forced to rotate Martin off the bench to keep his overall minutes in the coalface manageable, however, with Shai Bolton also missing, Hardwick may have to “rob Peter to pay Paul” as they will also need to counter the loss of Bolton in the forward line (six goals in the last fortnight).

I’m very much looking forward to seeing what Boak can do against the Bulldogs midfield. He was the leading possession winner last week with 28, which is at his average for the year. I expect him to go head to head with Jack Macrae in the middle. Even at age 32 he still has some of his burst from the midfield to go with his contested ball work and quality disposals.

On a personal note, I’m not sure there has been a more underrated midfielder over a consistent period of time than Boak. Expect an enthralling midfield battle whether he is clamping Macrae or fighting off Liberatore.

Hind has burst onto the scene in 2021 quicker than Cardano. The Bomber defender has been absolutely sensational since coming back from St Kilda, upping his disposal average to 23 per game from his career average (+10) along with seven intercept possessions and four score involvements per game. It must be noted, however, that the Saints played him up forward, whereas a return to his more familiar role in defence is reaping the rewards.

Perhaps a date with the pressure machine Lachie Schultz is on the cards in this contest. Hind must be kept accountable and on the move, and the Fremantle small forward could be the man for the job.

Not even halfway through his debut season for Carlton, a change of position has been flagged as a possibility for high-priced recruit, Williams. Acquired from the Giants with the prospect of a permanent midfield role, it is clear that the investment has not started off with the greatest return. Averaging only 18 disposals per game with his kicking efficiency at a rough 58%, Williams must lift before the Blues season is dead and buried.

It was suggested he return to halfback to find some form, as the midfield pressure has clearly affected his disposal and decision making. However, at face value, a defence that contains Williams and Saad would be as leaky as a chicken wire roof.

Sunday at Optus Stadium there will be a track meet taking place during a game of football, as running machines Andrew Gaff and Lachie Sholl are poised to go head to head on the outer confines of the WA stadium. I personally feel Gaff doesn’t receive the plaudits for the combination of work rate and disposal efficiency as a combination, as it’s one thing to cover ground, but to also fight through fatigue to still be able to deliver the football at a highly effective percentage is truly remarkable.

The Crows will counter with their own track star in Sholl, the betting favourite for the rising star ($5 on Ladbrokes currently- LOAD UP). Gaff has increased his disposal output a little more than previous seasons, despite the midfield getting better (injuries to teammates have been a factor) and this should be an enthralling battle that will test physical limits, but also mental willingness to keep going that extra mile.