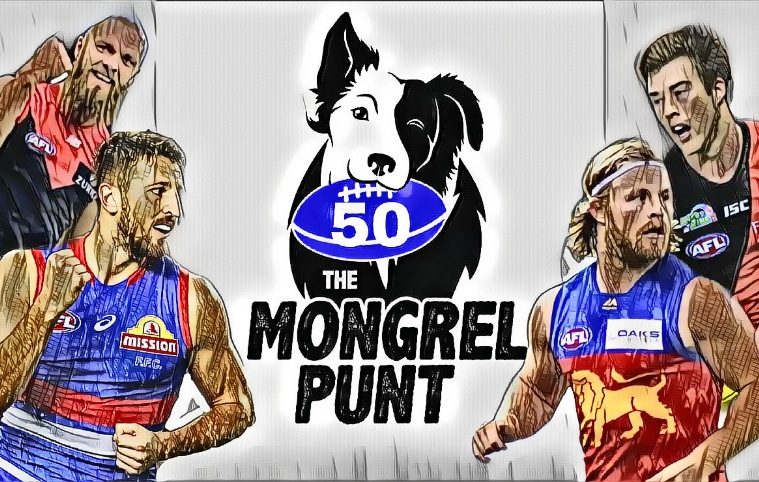 The third version of The Mongrel 50 for 2021 is live, with a new leader and lots of movement in the ranks.

What makes The Mongrel 50 different from every other set of player ratings is that it is fluent in nature, placing a strong emphasis on the last four weeks of footy to capture those in the best form currently.

How does it work?

Glad I asked – it gives 100% weighting to any points scored over the last four weeks and anything before that gets hit with a 50% reduction. It greatly benefits the present without completely disregarding the past.

So, how does that look in practice? Here’s an example.

Taylor Walker had a ripping first four weeks of the season. He was flying high, kicking goals and looked like he could not be stopped. But in the last four weeks, has he been the same player?

A calf complaint several weeks ago, combined with a slippery night in Adelaide and a towelling up from Tom Clurey means that his last four rounds have been nowhere near the highs of his first four. With the scores he accumulated through the first four weeks now incurring a 50% hit, he has started to tumble. He was ranked number one after four weeks, number two after six weeks and now, after eight rounds of footy, the slide has commenced. His early-season form is still good enough to maintain a good place in the 50, however, without at least another good game in the next fortnight, he will continue to slide.

Round Six ranks in parenthesis

THE NEW NUMBER ONE

Replacing Max Gawn at the top this fortnight, Jack Macrae comes in off an excellent Round Eight outing, supported by a huge Round Six game.

Gawn fell with no points earned in his Round Seven game and only minimal impact in the Round Eight game.

The consistency of Hugh McCluggage is turning some heads. He has been one of the best for the Lions in every game I’ve watched them this season. Wet weather or dry, he has worked tirelessly up and back all game long. It would not surprise me to see him hit the number one position in the next fortnight.

As stated in the intro, the aim for this is to have a good assortment of players across all positions. In the top ten, we currently have one ruck, two defenders, three forwards and four mids. Not bad.

Perhaps, however, this is a statistical/vote based system and there have been plenty of teammates pinching votes from him, and he just seems to clock in marginally under the statistical trigger point in several categories.

Given his consistency over the last couple of seasons, he will compile a good body of work over the course of the season, and I can see him slotting into the top ten eventually.

Darcy Moore – The move to attack hurt him, but this past week he took steps to rectify things. Good early season form sees him at 52.

Patrick Dangerfield – this is the season that his All-Australian run ends. Too much time on the pine, with more to come.

Aliir Aliir – stats don’t reflect his efforts and neither do the coaches votes or the Mongrel votes, apparently. 67th.

Patrick Cripps – not himself this season… or last season, which is a bit of a worry. Scored well in Round Three. Has barely troubled the scorers in the three others. 100th place

Dustin Martin at 83 (Was at 59 last fortnight and has been out and played ordinarily last week. No chance of a rise up the ranks on that form)

Scott Pendlebury… all the way down at 154, but to give a bit of hope, Tim Kelly was at 164 two weeks ago and has made a massive jump into the top 50 again. It can be done.

Anyone else you want to know, give me a yell and I’ll let you know.

And now, for our Inner Circle Members, I’m jumping to the weekly rankings.