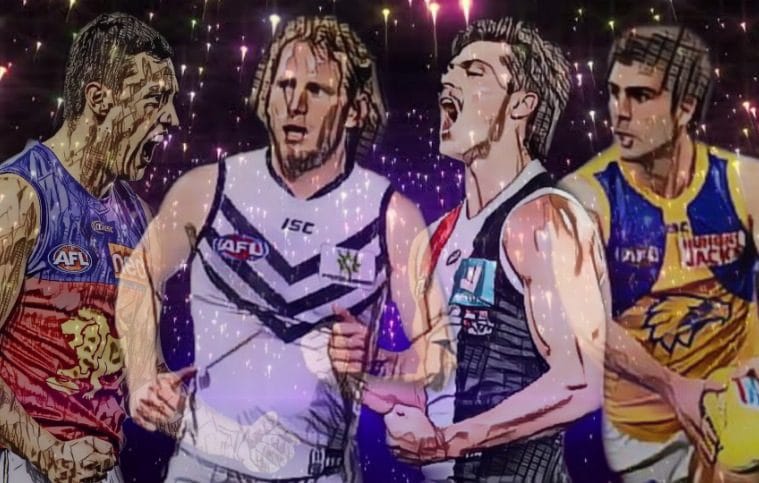 We’re a third of the way through the 2021 season. Why do I feel like this is Groundhog Day, and we’re just repeating last year? Richmond have their doubters for some reason, Hawthorn and North Melbourne are no good, West Coast can’t beat anyone decent away from home, Carlton aren’t as good as they should be, Ed and Kochie are behaving like school children, and the match review panel and tribunal can’t get their ducks in a row and be consistent from week to week.

Anyway, let’s get into what we came here for.

Those of you who appreciate the status quo, rejoice! For the first time this season, our 22 remains unchanged. There are certainly some that won’t want to have another less than stellar performance, but the more I looked at our incumbents, the more I realised that not one player deserved to lose his spot. Yes, there are plenty chipping away in the two’s, and their time will surely come, but these men all deserve recognition for their consistent efforts all season long.

Since we have the same 22 as last week, this week we will focus on positioning. In order to do that we need to start back at square one, and ask ourselves a few questions. Jacob Weitering and Steven May. Which of those two is the better stopper, and who is the better rebounder? Of the two, from a purely statistical point of view, Weitering is the rebounder; May the stopper. Hence, both players stay the same.

Next, we look at our rebounding defenders, Jack Bowes, Daniel Rich, Christian Salem and Lachie Ash. All four are excellent at their craft, but which of the four venture further up the ground? Salem is the obvious one, so he stays on the half back line. Ash is averaging the least possessions of the four, so he stays in the back pocket. After much deliberation, I have decided to move Rich up the ground, purely because his last four weeks have been phenomenal.

Let’s go forward. The most obvious move is the swap of McKay and Walker. Now that McKay is the Coleman Medal leader, he should take the full forward position, leaving Walker to take centre half forward. Of the other four forwards, only two are “traditional” forwards, so both Toby Greene and Ben King keep the forward pocket spots.

Max Gawn is the only ruckman, so he’s not moving.

First of all, we need to work out which of those players make the best rotating forwards. Petracca has kicked the most goals (nine), so he keeps his forward flank spot. Langdon, McCluggage and Steele have all kicked seven goals, but McCluggage has kicked ten behinds. Gaff and Langdon keep their wing spots as they are the best true wingmen.

Which leaves Macrae, Oliver, Walsh, Steele, Wines, Mundy and Guthrie. The best of the bunch is Walsh, so he moves to the centre square. Jack Steele has kept St Kilda from falling off a cliff, and deserves recognition for that, so he moves underneath Gawn Oliver is the clearance king, so he moves to the rover position.

Ollie Wines, David Mundy and Cam Guthrie keep their places on the bench, and are joined by Jack Macrae, who it’s fair to say has been wonderful for the Bulldogs, but he is helped along by the best midfield in the competition surrounding him. I felt that in Steele and Walsh’s case, they have been asked to do more for their teams, and that propelled them above Macrae.

So with all of that information plugged into the algorithm, here is the official All Australian team for Round 8:

This week, I thought I’d take a look back at our previous seven instalments of this team, and focus on those players that were in the team at some stage, but for various reasons were omitted. Here, we will focus on seven players in particular.

For three weeks, Nathan Buckley decided that the best solution to Collingwood’s forward line issues was to move superstar defender Darcy Moore to the front half of the ground. It did not go well. I know that’s a pretty obvious understatement, but from the outside looking in, it really felt like Buckley was just robbing Peter to pay Paul. On Saturday against North Melbourne, Buckley moved his trump card back to his natural habitat, and the move paid dividends, with Moore producing arguably his best career game. Moore gathered 28 disposals (a career high), 19 marks (a career-high), 11 interceptions, and 480 metres gained. Safe to say that Moore will never play forward ever again.

Speaking of defenders, Power star Aliir Aliir has been in a season-long battle for the key defensive posts. In and out of the team on multiple occasions, Aliir was omitted from the line-up simply due to the balance of the team. He responded with a near best afield effort in the Showdown. Taking a game-high nine marks, Aliir was an intercepting beast, and also helped in keeping Adelaide’s forwards quiet. Aliir has been the recruit of the year, and if he keeps his form going, he will regain his place in no time.

Let’s talk midfield. Specifically, Marcus Bontempelli, Zach Merrett, Rory Laird and Callum Mills. Bontempelli is close to the Brownlow Medal favourite, and was enormous in the Bulldogs come from behind win against Carlton. Finishing with 32 disposals (19 contested), 12 score involvements, ten clearances, ten inside 50’s and eight marks, the Bont was simply unrivalled. So why is he on the outside looking in? It is simply of case of Luke Beveridge’s biggest strength working against Bontempelli. In rounds three and four, Bontempelli was overshadowed by teammates, and he has had a performance or two where he was very good, but not as good as Macrae. For this reason, Macrae retained his place ahead of his skipper.

Like Bontempelli, Zach Merrett has been sensational for Essendon. Against the Giants, he was unbelievable, and almost got the Bombers across the line, finishing with 37 disposals, 13 inside 50’s and nine score involvements. It pains me to say that Merrett is perhaps the unluckiest of all our players to find himself out of this team. The unfortunate man to lose his spot when Jordan Ridley was moved to the bench, Merrett followed up with a 25 disposal effort against the Giants. This performance came at the worst possible time, as once Ridley was dropped from the team entirely, Cam Guthrie put together a best on ground display, usurping Merrett.

Finally, there are two players who started in our team as defenders, but dropped out because they’ve played midfield all year, Rory Laird and Callum Mills. Both have been exquisite for their respective teams, after starting out their careers in the back half. In Matt Crouch’s absence, Laird has thrived, averaging 30 disposals, six tackles, four inside 50’s and seven clearances, the latter three all career highs.

Now in his sixth season, Mills has finally exploded into the player the Swans saw when they drafted him with pick three. This year, in Sydney’s new-look midfield, Mills is averaging 26 disposals, five clearances, five tackles, seven marks, six score involvements, all of which are career personal bests, and he has doubled his career goal kicking tally.

Both players have been excellent for their clubs, but not quite as good as our midfield incumbents. They are close, but neither has had a headlining, match-winning performance that elevates them above the likes of Steele, Walsh and Oliver.

We haven’t had too many forwards that were in this team that have lost their place that truly deserve to regain it. Looking at every other team, only one player stands out, and that is Bulldog Josh Bruce. Gaining entry into our forward line following a 10 goal destruction of the Roos. But the biggest concern was backing it up. Consistency was king, and Bruce failed to deliver. That all changed on Sunday, with Bruce finally delivering against an opponent not named North Melbourne. Bruce gathered 15 disposals, took 11 marks, had 11 score involvements, and kicked five goals. Bruce currently sits third on the Coleman Medal ladder with 25 goals, five behind Harry McKay.

As every player in our 22 has retained his place, it was very difficult to find anyone that would fit into this category. Only one player has had a significant enough dip in form that will see him lose his place quickly, and that’s Crow Taylor Walker. After Round Three, Walker had kicked 17 goals, and the hashtag #texcoleman was trending on social media. Five rounds later, Walker has only added 10 more majors to his tally, and his stranglehold on the Coleman Medal has been broken by Harry McKay. Walker has been carrying a calf injury for a few weeks, and it seems that he is being affected by it much more than the club is letting on.

Matthew Nicks and his team won’t want to admit they made another wrong decision after the Tom Lynch medical sub fiasco, but they now need to recognise their mistake and put Tex on ice for a few weeks.

How should I conclude this week? Should I give my premiership prediction? Port Adelaide. My big call? Geelong won’t get past the second week of finals. A movie suggestion? Scott Pilgrim vs. The World. What about a holiday destination? Port Douglas. Maybe I’ll say all of those things…..