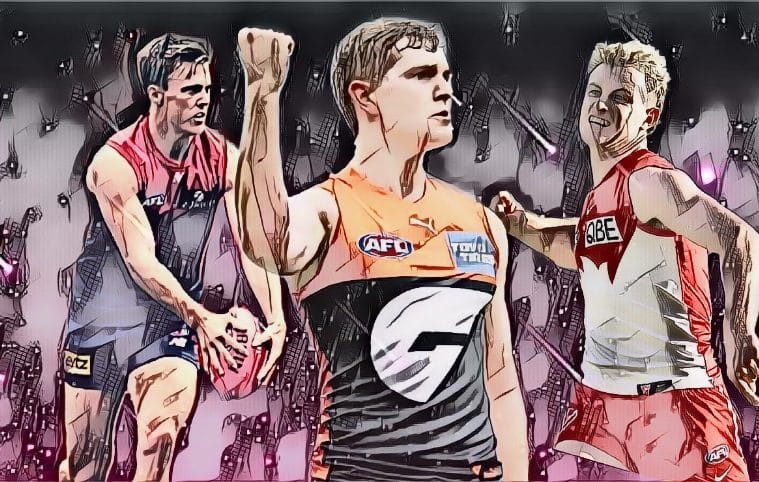 The big-framed Giant midfielder collected his second five-vote nomination of the season to thrust him up the leader board this week with a commanding performance against the luckless Bombers. A rising star-leading 28 disposals, seven marks, five inside 50s, four clearances and eight score involvements helped his team sneak over the line by just two points in a thriller at Giants Stadium.

Green has played a big part in his team’s turnaround from 0-3, averaging almost 24 touches per game in their four wins since, a big challenge faces him over the next three games with heavyweights Richmond, West Coast & Brisbane ahead. Was the only Rising Star eligible player to poll coaches votes this round, another glowing endorsement of his contribution.

The Melbourne hard nut has been rewarded with his second votes of the season after a sterling effort in tough conditions on Saturday night against the Swans. Repeatedly throwing his body on the line, Jordan was a prime mover for his Dees with 23 touches and eight tackles, two of which were invaluably inside forward fifty adding to the pressure applied by Spargo and Pickett.

Two clearances and four intercepts topped off his night, only slightly marked down by the six turnovers he recorded which led to a disposals efficiency of just 47%. The weather and fierce attack of the opposition were most certainly added contributors to this lower than usual number, so all forgiven.

The rookie Collingwood tall defender has returned strongly after his suspension for tripping in Round Five and becomes the first Magpie to poll votes in the Mongrel Rising Star award for 2021. Nine intercepts highlighted Keane’s break out game, as he repelled multiple advances from the competitive Kangaroos, helping himself to twenty-one disposals in the process and five marks.

His coach would’ve also been pleased with an impressive three one-percenters recorded, always a good indication of work rate and willingness to follow team instructions.

The rugged Sydney number 1 was slightly less prolific than in other matches, but no less effective against the might of Melbourne’s highly-acclaimed midfield. 15 disposals, 338m gained kept his team in the fight for much of the night and his grit and determination slowed the likes of Oliver and Petracca from running completely roughshod over the Swans.

Four tackles including a meritorious three inside the attacking fifty meant the usually free-wheeling Demon backline didn’t have things all their own way. Warner has now polled in five matches out of eight rounds this year to move to within one great performance of the lead.

While Port Adelaide’s recent recruits get all the acclaim, Crows fans would be quietly content with the progress of Sholl and his fellow winger, Schoenberg who was again important in their highly anticipated cross-town match up.

He collected nineteen disposals as he worked tirelessly up and down the ground as well as in the clinches, recording five clearances and five tackles had him as one of his sides best on the night.

Mitch Georgiades, the Port key forward was unlucky not to snag a vote this round for a strong performance in the showdown, probably his poor conversion the difference, but remains highly effective with five scoring shots from 14 touches.

Caleb Poulter, another of the emerging Collingwood young brigade, Poulter was excellent with 18 assured touches disposing at 84% as he coupled his four marks with four intercepts along with two each inside 50s and rebounds from fifty in a highly encouraging display.

While the leader board is starting to take a little bit of shape, by the nature of rookie players they can be inconsistent and across a long season can experience some ups and downs, so the award is still truly anyone’s to claim. The exciting thing is that plenty of other quality kids are starting to find their place, and while not challenging the votes this round, there were more than glimpses in each of Oliver Henry, Tanner Bruhn, Connor Idun, Charlie Lazarro and Bailey Williams’ performances over the weekend to suggest they could push into vote calculations in the coming weeks.