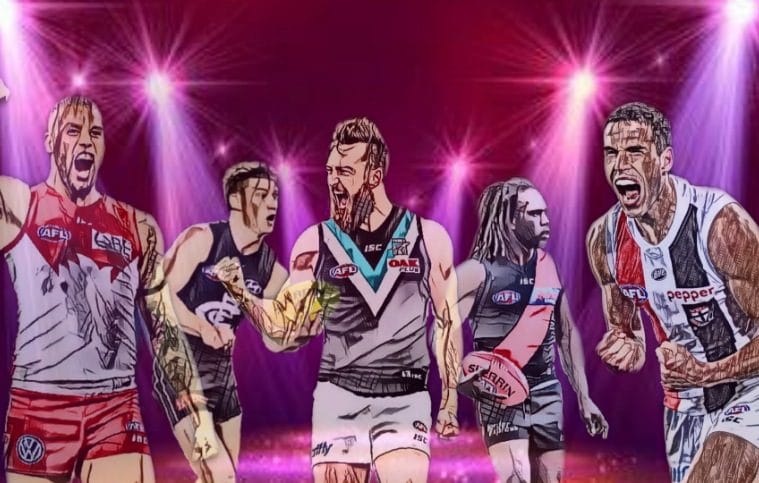 In The Spotlight – Round Eight

Welcome back for another week of ‘In The Spotlight’

For the first time in a few weeks, every player selected last round had a chance to strut their stuff in the action. Let’s take a look at how they went, then get into another weekly list of who comes into my spotlight

HARRY CUNNINGHAM: 17 Disposals, seven marks, four tackles
Was ok, however not as efficient with the ball as he would have liked.

STEVEN MOTLOP: 19 Disposals, eight marks, two tackles, 0.1
Couldn’t do much to curtail Rich or Birchall, though they often feasted on the dominance of Harris Andrews. Work rate was outstanding though

BEN BROWN: 5 Disposals, one mark, one tackle, 2.1
Would be glad to get through the game, scoreboard conversion was good but his hands were shipwreck rusty. Ben McKay had his number

ADAM SAAD: 21 Disposals, two marks, one tackle, 1.0
Looked the goods in this contest, but once again offered little on the defensive side.

DOM SHEED: 30 Disposals, six marks, three tackles
Played his part along with his dominant midfield cohorts; didn’t dominate but didn’t have to.

With Dylan Grimes forced out of this pivotal clash, the Richmond key defenders will have their hands full. Often they thrive on working in a zone setup, with help over the top and ground level but Grimes was a big part of that game plan. Astbury might find himself on Hawkins but early on he might take the canny Cameron. Early on, Balta looked a bit unsure under the high ball when caught flat-footed, but he has looked better in recent weeks, probably indicating a match-up with Hawkins early. The underrated defensive positioning of Astbury could hold the key to stopping Cameron on the lead.

A date with Gold Coast interceptor Charlie Ballard looms in this clash. Max will have the benefit of having a resting ruck over the top, ensuring he is left one-on-one if his spacing is right. Ballard is a very handy intercept defender, however, he showed early against Brody Mihocek that he is still working on his endurance, and can be taken advantage of when kept on the move.

Look for King to work outside 50, dragging one of the key defenders out to thwart the aerial contests that the Suns are so good in. Early on he may get Jy Farrar, who will give up height to the big Saint, but will be able to athletically keep up with King.

Tippa is the barometer of the Bombers forward line; when he brings the heat they look like world-beaters, however, when he is off so are the whole team. For the Bombers to be in this game he must bring that manic pressure for the full four quarters. He is one of the most instinctive footballers I have ever seen, however, I do feel that if his defensive attributes are nullified on game day he can largely be just another number, as he often turns defence into offence.

Watch for him to be step-for-step with Lachie Ash, making sure he brings as much intensity as necessary. It has been noted his output changes drastically depending on wins and losses, though it’s still hard to tell if it is based on work rate or opportunity.

Seriously… Who else was it going to be?

In this mouthwatering contest, the former Magpie has the chance to stick it right up his former side. He will likely get second-gamer, Caleb Poulter out wide, but I really would love to see him go straight to young gun Josh Daicos in the middle, where he can counter the IQ and skill of Daicos with his acceleration off the contest.

Look for the Pies midfield to come out in full force after copping a contested ball hammering from the Suns last week.

With Buddy marked to make his return, it provides a Sydney team with a boost against top of the table Melbourne. Franklin may not be 100% fit, however, the Demons are dealing with issues of their own.

Having lost utility Adam Tomlinson to a season-ending ACL tear, Franklin comes in with the job of keeping gun defender Steven May busy. May has the strength and size to trouble Franklin, but he too has had a few injury niggles, and as we know, Buddy just needs a sniff of the goal to create something special.

If Franklin can at least provide a contest and keep May or Lever grounded, he can bring the smaller forwards into the frame. With his return, I believe he plays as a true full forward, which also in turn could limit how high up May can operate as a true interceptor. He must also get help from his teammates to keep Jake Lever out of his way, and honest in the aerial battles.

Beaten like a drum last week by gun defender, Harris Andrews, Dixon needs to respond, and why not do it under the spotlight of the biggest game of football in South Australia? Dixon looks out of form in 2021, and that could be due to not getting enough one-on-one contests that actually work out to his advantage.

At times he looks like a man amongst boys, yet he could not fight his way out of Andrews’ back pocket last week. I’m backing him in to rediscover his mojo, kick six goals against Jordan Butts and win the Showdown Medal in a big win.

Hawthorn vs West Coast: Jack Gunston
Seven touches is unacceptable for a guy with the talent of Gunston. He has a mammoth task on his hands in this contest, with keeping this stout defensive unit on their toes. Gunston is one of the highest IQ players in the game and an absolutely deadly finisher. He should revert to his role down forward, as his time in the midfield was wasted against the Saints – he won’t have the pace to trouble the Eagles, so his energy would be better used as a defensive-minded half forward.

I will give him some leeway as it was his first hit-out at AFL level for the season, however, he won’t have much time to find his form, as the Eagles provide one of the tougher tests for forwards.

I might be the only guy in Australia that doesn’t buy “Walsh is better the Cripps”
Sam, this is your chance. As the Blues have gone for speed over the inside approach, it has unlocked the full skill-set of the former number one pick, and left Cripps, the co-skipper almost an afterthought.

Walsh has been absolutely sublime, with his sheer determination and gut-running on display for Carlton. With the Bulldogs possessing the most loaded midfield in the AFL they have a few options for Walsh. Watch for Adam Treloar to go head-to-head in this contest which will have a massive say in the outcome of the game. No matter the score, if you keep your eye on Walsh and his opponent, then you will be the true winner.

Taberner has the size, mobility and hands of the prototypical modern-day forward, which is great news as he is up for a battle with Lions gun Harris Andrews. Taberner MUST take any opportunity he gets, as his kicking can be accurate on the odd occasion from the boundary and then let him down from straight in front.

The height of the Fremantle forwards may cause Brisbane some problems, as Tabs and Lobb can combine to form an imposing aerial tandem. Marking on the lead is the bread and butter of Taberner, however, that also plays into the strong suit of Andrews. Look for Taberner to keep him deep and create a small separation so he can get a running leap at anything coming through.