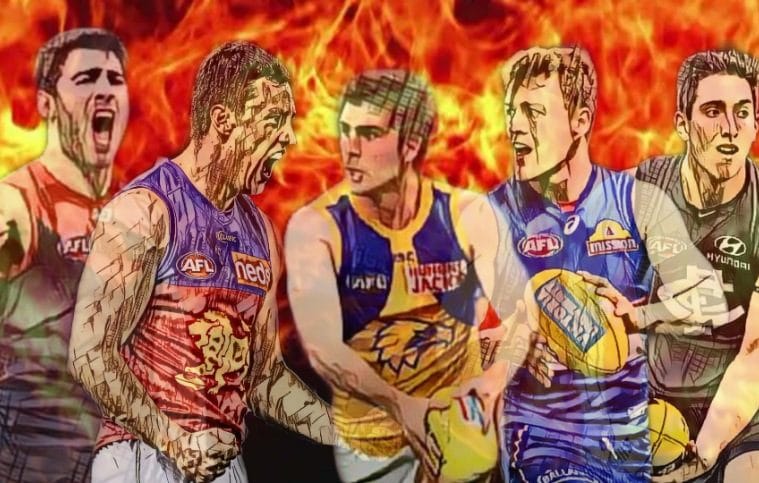 Remember last week how I threw out a bunch of sentences, and told you each one would perfectly describe each team? Well, let’s see if you agree with my assessment.

DISCLAIMER: This was done prior to Round 7, so the needle may have slightly shifted since then.

“Can we please start playing some good football?” – Carlton, GWS

“Weren’t we supposed to be better than this?” – St. Kilda, West Coast

How close did I get?

Is there a more improved player in the competition than this young Giant? Lachie Ash has gone from fringe rookie, to superstar rebounding defender in just a matter of weeks. In his debut season last year, Ash put together a serviceable 12 matches. This year, he has well and truly cemented his place in the Giants backline, averaging 24 disposals, eight marks, and five defensive rebounds.

HALF BACK FLANK: CHRISTIAN SALEM (MELBOURNE)

In my opinion, Christian Salem has always been underrated by many in the AFL universe. In his eight years in the system, Salem has averaged 23 disposals, often in an underperforming team. This year, much like his Demons, Salem is thriving, and it can be argued that Salem is one of the main catalysts for Melbourne’s success. Salem is averaging 27 possessions, five score involvements, six marks and five defensive rebounds.

Does Andrew Gaff ever play a bad game? An average one, sure. But has he ever put in a truly bad performance? If he has, I can’t recall it. Last year, in the COVID affected season, Gaff averaged 24 disposals, the first time since 2014 it had dipped under 30. This year, Gaff has returned to his (semi) previous levels, averaging 27 disposals, along with eight marks and five score involvements. Gaff has always been the perfect link between defence and attack, and the Eagles would be lost without him.

I know, I know. Why is midfielder Hugh McCluggage placed on the half forward flank? I simply couldn’t leave this man out, given his rich vein of form, but there weren’t any midfield spots left, and of the centremen I have picked, McCluggage is the most qualified forward. McCluggage has had 16 scoring shots in his seven games, but has only kicked six goals. McCluggage averages 26 disposals and eight score involvements in 2021, and will become the AFL’s next bona fide superstar if he can fix his conversion.

You can only bang the door down so many times before you burst your way through it. Like David Mundy last week, Cam Guthrie has put together excellence that can no longer be ignored. 2016 was Guthrie’s best year for disposal average (23). He has also only been above 20 per year on three occasions, 2015, 2016, and 2020. This year, much like the door to this team, Guthrie has smashed his averages out of the park, averaging 30 touches a game. Every major stat has also increased, and it Guthrie is only just getting started.

Daniel Rich moves into the back pocket, simply to make room for Christian Salem. That back pocket spot was left vacant by Jacob Weitering, who moves to centre half back, replacing Port Adelaide’s Aliir Aliir. The only other movement was the vacancy underneath Max Gawn. After much deliberation, I decided to reward Sam Walsh, who has overtaken Patrick Cripps as Carlton’s best player. Listed in our team as a wingman, Walsh now needs to be recognised as the outstanding midfielder he is.

Changkuoth Jiath had his second poor game in three weeks, and could no longer make a strong enough argument for retention. Jiath still averages 21 disposals a game, and is a star of the future, but teams have started to work him out, and have begun stifling the space he gets, causing him to either not go near the ball, or panic and fumble when he does have it.

Even though this team has three key forwards, I felt that our defence was getting too top heavy. From here on out, unless an extraordinary performance can’t be overlooked, I will only be going with two key defenders. Steven May was excellent, especially given he lost defensive partner Adam Tomlinson, and Weitering was an incepting machine for the Blues, taking 11 marks in Carlton’s victory. The unfortunate man to fall off the edge is Aliir Aliir, who paid the price for his team’s heavy defeat, and has strung together performances that could only be considered noteworthy at best, which isn’t enough to hold your spot in this line-up.

Two players who have missed matches fall out of the team this week, with Jordan Ridley and Dustin Martin unable to make the case for their spots to be held. Ridley returned this week, but still seemed to be slightly hampered from his concussion, and Carlton kicked 19 goals against the defence he led. Martin was in New Zealand this week, and while he is likely to return to the Tigers’ line-up given the injury to Trent Cotchin, it was realised that like many others, Martin had started to be included on reputation alone (even though he is still performing at a reasonably high level), and his output had dropped off from his first few weeks. Therefore, given these reasons, Ridley and Martin were unceremoniously cut.

Finally, Josh Dunkley’s extended period on the sidelines sees him drop out of the team. The reason it happened this week instead of last, as I saw with many others’ team’s, is that in the game Dunkley got injured, he was one of the Dogs best, and still deserved to retain his place.

So, with the significant changes to the team, here’s where we stand:

I’m not sure why, but I’ve settled on eight players each week that we will classify as “in contention.” Don’t get bogged down on the number, even I don’t know why it’s eight. Anyhow, let’s go through them.

Jayden Short has continued his stellar 2020 form, and even though his team has been slightly hit or miss this season, Short has been one of the Tigers’ best, using his lethal kicking skills to constantly drive Richmond forward. 135 of Short’s 167 disposals have come by foot, and he also averages eight rebounds from defence. Someone else who has been a rebounding machine is Swan Jordan Dawson. Like Short, most of Dawson’s disposals have come by foot, and while he averages seven defensive rebounds, he also gets involved up the ground, averaging four score involvements.

The four midfielders I’d like to spotlight this week are Crow Ben Keays, Suns Brandon Ellis and Hugh Greenwood, and Giant Tim Taranto. Keays has been the AFL’s most improved player, and has thrived in Rory Sloane’s absence. Keays sits comfortably in the top 20 for disposals, with an average of 27 per game, Keays is making the most of his second chance, after being discarded by the Lions.

Brisbane’s cross-state rivals, Gold Coast, have suffered on the injury front, with their two most important players, Jarrod Witts and Matt Rowell, both missing extended time. You’d expect the Suns to fall over, but thanks to Ellis and Greenwood, Gold Coast is playing inspired football. Ellis has dominated the wings, averaging 27 disposals, and has only gone under 25 once. Greenwood too has been excellent, and is the Suns contested beast. Greenwood averages 20 disposals in 2021, but 14 of those are contested, and he also averages nine tackles a game. Then there’s Tim Taranto, currently the most in form of the Giants army of midfielders. Averaging 29 disposals, five tackles, five marks, five score involvements, and four inside 50’s, Taranto has led GWS’s midfield spectacularly, and will continue to do so for many years to come.

Up forward, two players are putting their hands up, and they are at either end of their careers. Bayley Fritsch has been Melbourne’s most dangerous forward, with 18 goals from his six games. He has been so good, that the Demons have remained undefeated, despite minimal impact from their three key forwards. With Adam Tomlinson going down with injury, and Tom McDonald needing to move into defence, more pressure with be on Fritsch to continue delivering bags of goals. Speaking of bags of goals, hasn’t Cale Hooker flown under the radar. Seemingly out of nowhere, Hooker has resurrected his forward line career, kicking 21 goals in seven matches, and more than filling the void left by Joe Daniher’s departure. Essendon’s young defence is faring well in his absence, so for the moment, Ben Rutten has found the forward weapon that can both win now, and help aid the development of the young guns.

Weirdly, just two players are even the slightest bit shaky, but that’s mainly because every player that held their place did so with significant performances. The two men we’re about to talk about didn’t have their best games over the weekend, but retain their spots due to their overall seasons.

Ben King is one of the competition’s best young key forwards. In his 38 games, he has kicked 62 goals, a tally greater than Lance Franklin, Josh Kennedy, Jack Riewoldt and Tom Hawkins could achieve to the same point in their respective careers. While some would be calling for his dropping after his average performance against Collingwood, after being overshadowed by Josh Corbett. However, I believe King’s 20 goals stacks up against any other key forward in the competition. King retinas his place for now, but Gold Coast needs him to keep firing. If he doesn’t, not only will he lose his place in our team, the Suns may also struggle to banks wins.

Toby Greene was very good against Adelaide and has kicked 19 goals in his seven games. However, he’s also been wayward, kicking 20 behinds. Against Adelaide, it was no different, with Greene kicking just one goal, but three behinds, from his 19 disposals. Greene’s talent and leadership can never be questioned, and his numbers suggest he is an ever-present danger in front of goal, but he must fix his conversion. It’s the only aspect of his game that is keeping him from reaching the next level.

In trying to come up with a good way to end this week, I kept running into a brick wall. So I thought I’d tell you a little bit about myself. Think of this as the “about the author” section you see at the start of novels.

I am a Hawthorn supporter who lives in Adelaide, so work that out. My cat sat on my laptop while I wrote this piece, and is very likely to come back before I’ve finished. My favourite food is donuts. I like the music of Taylor Swift, Queen and the Eagles.

And I love Zak Butters.