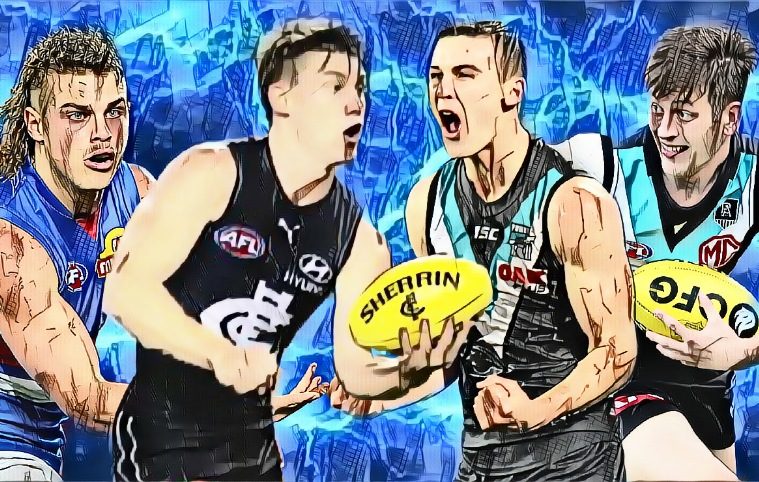 The argument about the 2001 AFL National Draft raged for years, and some may be very surprised to know that there was a significant period of time where it wasn’t just Chris Judd v Luke Hodge that dominated the debate.

Luke Ball was held in very high regard in his first few years in the league, often slotting in at second on people’s redrafts until Hodge really hit his straps and developed as not only a great player, but a great leader.

Even now, there is no consensus. Judd or Hodge? There are strong arguments for either. Judd with two Brownlows and a Norm Smith to his name. He is a premiership captain and one of the best midfielders of his generation. And Hodge, with his four premierships and three as captain. Add to that two Norm Smiths of his own and you can easily make an argument for him.

As we work our way through the 2021 season, comparisons amongst those taken in the same draft year are inevitable, but one  that is shaping as the next contentious subject in AFL circles stems from the 2018 Draft – a night where four young men were selected within the top 12, each with a claim on being the best young player from that group over the past three seasons

Picked at number one was Sam Walsh – a gut runner right from the get-go, he won Blues fans over immediately with his hard work and commitment.

Selected at number five, Connor Rozee set the league alight in his first season with his wonderful skills as a small forward.

At number seven, Bailey Smith headed to the Western Bulldogs and proceeded to grow not just a filthy mullet, but a game that blossomed in his second season.

And at pick 12, Port made the second of three astute picks, with Zak Butters joining them and having a break out season in 2020.

Seven rounds into the 2021 season, it seems that every week and every game provides a new spin on how that draft should have played out. Monday’s experts have their say and at times, it differs from one Monday to the next. Yes, we could add the names of Max and Ben King to the mix as well (picks four and six, respectively) but they’ve been dealing with comparisons all their life, and will no doubt have the performance of the other twin driving them toward individual glory. Anyway, that is another column coming soon, comparing the best 22-and-under forwards… should be a good one.

With two seasons in the books, it was a close race heading into this season. Let’s make the case for each.

This content is for our paid members. Each week, the entry-level membership at The Mongrel gets the wingman rankings, early access to Good, Bad, and Ugly game reviews, The Mongrel Punt Midfield Championship Belt update, and standalone articles such as this. Want to join them?