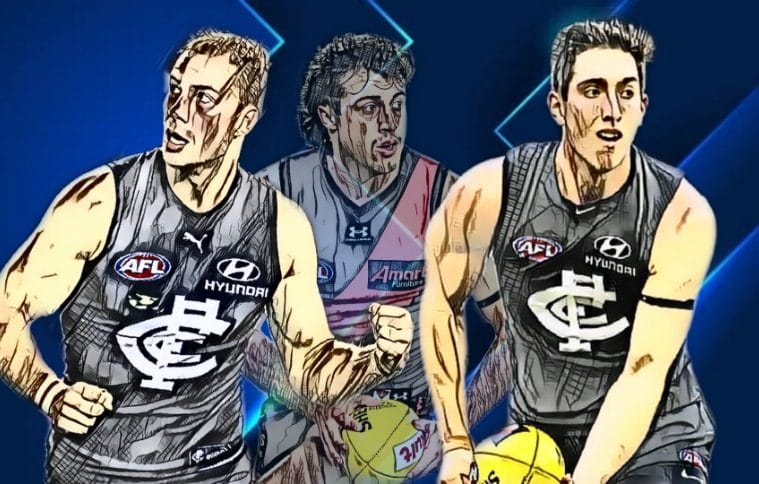 With Essendon coming off a big Anzac day game and the Blues coming into some decent, whole-team contribution, the lead up to the game promised that these two old rivals would put in a game worth watching, and for once the hype was accurate.

While Carlton took the points, Essendon were right in the game up until the last few minutes. The 16-point margin doesn’t really do the game justice, with Essendon deciding to roll the dice and risk a big loss to get the win—something that I think will serve Rutten in good stead with this young side.

Both teams had good contributions from their stars, as well as emerging players stepping up to get themselves noticed, and the crowd of nearly 58,000 at the ‘G were at their vocal best, cheering, jeering and bringing the atmosphere to the game that we all enjoy (well, except perhaps Adam Saad who was booed every time he got near it, but that’s what happens when you jump ship).

There wasn’t a lot to separate the two teams, and in the end, it really did come down to who was going to make the most of those half-chances, and Carlton managed to get the job done.

Let me start by saying that Sam Walsh can get stuffed.

I mean, seriously. In what way is it fair for a kid whose birth year starts with a 20 to be as good as he is.

I think even a moderately myopic Essendon supporter would have him in the votes tonight, and if they’re being honest, they’d give him the three. He was involved in everything and was doing it all. He collected his own ball, linked up to break lines, tackled well, and stood up when being tackled to get an effective disposal. Even the commentary team was talking about how young players would be looking to him as a role model, and the fact that they’re saying that about a kid who wouldn’t be able to have a beer on an end of season Vegas trip is just absurd. Accurate, but absurd.

OK, now that I’ve ticked that box and given a pump up to Carlton’s favourite kid almost as large as next year’s Visy “VP of client relations” contract, time to move onto the lesser mortals.

Darcy Parish and Dyson Heppell had a fair bit of the ball, and did pretty well with it without being spectacular. That role was left to Andrew McGrath, Zach Merrett and Archie Perkins. It might seem dismissive to say that, but each team needs their constant performers, as well as their impact players.

McGrath was fantastic in the in-and-under role, racking up 17 contested possessions to go with six clearances and over 700 metres gained. Quite a few of those metres were banging it on the boot from the pack, but his work rate was such that he could often chase down that ball to pressure any interception or assist any teammate if the ball hit the deck.

Merrett was a pressure machine, constantly harassing his opponents and gut-running to be an option and link-up target.

Archie Perkins was excellent at something that has become a skill very much in demand in the modern game -effective forward 50 kicking. He had 12 score involvements and three goal assists, but those numbers don’t truly represent how well he managed to spot targets when transitioning from the midfield into attack.

For the Blues, Cripps once again showed why he’s been so highly rated for so long with his quality of disposal, and likewise managed to spot up some nice forward 50 targets. He didn’t have the impact that some fans may want from him, but he’s a player that lifts those around him.

Adam Saad also had some nice runs in a fairly hostile environment, with Essendon fans very eager to let him know their feelings about his move to Carlton. He helped move the Blues out of defence with trademark speed, and his ability to hit a target was better than usual, though still likely had a few navy blue stubby holders flung at TVs around the country.

If there’s one thing that both sides will take away from the game, it’s optimism for the future. Essendon are sporting a pretty young side, and contributions from Nik Cox, Harrison Jones and the aforementioned Archie Perkins were very reassuring. Of the three, Cox has probably gotten the most of the plaudits, but Jones and Perkins look very comfortable in that forward line, and Bombers fans can justifiably be excited about them.

Carlton though can still claim the edge here with Sam Walsh looking like he could be a generational player, Fogarty contributing two nice goals and Category B rookie, Owies making it practically impossible to drop him in the twos next week, with three goals and four tackles. One of those tackles saved a goal early in the last quarter, fiercely collecting Nik Cox and wrapping him up in a vice-like body lock and denying him a chance to chip it through the big sticks.

Modern footy is all about pressure, and Devon Smith, Zach Merrett and Darcy Parish all showed how full-ground pressure can help their team, combining for 24 tackles between them.

Essendon clearly identified Carlton’s transition footy as a danger, and pulled out all the stops to shut it down by pressuring the ball carrier at every opportunity. It worked out well for them too, as they managed to edge Carlton in forward 50 entries for the game. The problem they had was that apart from Perkins, McGrath and Parish, their disposal into and within their attacking 50 was a little lacklustre.  One standout example was early in the third quarter when Stringer had the overlap on Carlton’s defence and kicked into attack with both Hooker and Tippa in plenty of space, only to pick out Liam Jones on the chest.

For Carlton, Weitering and Jones kept up a lot of defensive pressure, and were consistently looking for Saad for a quick receive when the long option wasn’t on. Their decision-making wasn’t perfect, but worked out pretty well most of the time.

Paddy Dow disappeared due to injury and was replaced by Sam Petrevski-Seton. Dow’s face looked pretty banged up, and his eye swollen badly. Hopefully, he’ll pass a medical, but it seems unlikely he’ll be 100% by next week. Pet-Set was a decent contributor though, especially in the third quarter.

David Zaharakis didn’t get on the park as a medical sub.

Ridley’s return was something Bombers fans were excited about, but his first game back from a concussion in round five wasn’t quite what they’d have preferred. He wasn’t a liability, but just a bit less influential than he has been earlier in this season.

Mitch McGovern once again had a few moments to go with a nice goal, but Blues supporters are still looking for something more from him.

I’ll put my hand up and admit, I love a long bomb through the sticks. Modern football doctrine often prefers setting up a teammate that has a step on their opponent, but let’s be honest here; when you were a kid, you weren’t imagining the set shot from 20 out to win the Grand Final for your team. Nope, it was always 80 out, slight angle with the imaginary commentary team giving you no chance of kicking it. Then, just as the siren blows you unleash a monster torp that sailed through over the stands to make Malcolm Blight envious.

So with that in mind, Stringer’s long bomb in the first was a delight, both for an outside 50 goal as well as his willingness to take the shot. Stringer seems to very much be a confidence player, and when he’s feeling it, he’s very dangerous.

Having him in the forward line also opens up Cale Hooker. They both play fairly different styles, with Stringer more than happy to shift up the ground on occasion, and even have a run in the middle, whereas Hooker likes to stay a little closer to goal. This means they don’t often spoil each other’s leading zones, which works well mostly. Hooker’s return of 5.1 puts him up to third in the Coleman, pushing past Josh Bruce, Ben King and Jack Reiwoldt. He’s still five shy of McKay and six from Tex Walker, but his form this year has been very solid.

If Hooker has been solid though, McKay has been stellar. Sitting a single goal off the runaway leader is a position I don’t think even the most optimistic Carlton fan would have had him in right now, but he’s really showcasing his ability to act as the spearhead of this Carlton attack.

While the big forwards plied their craft, any time a footy fan has a chance to watch a game with both  Anthony McDonald-Tippungwuti and Eddie Betts in it, you take it. Eddie’s innate goal awareness and freakish snaps are simply a joy to watch, and his three majors were a perfect complement to McKay’s effort.

Tippa also gave us exactly what we wanted to see, with his trademark dash, ability to create options, and fierce forward pressure. He kicked four to go with his six tackles, and looked very solid all day.

Essendon and Carlton match up very evenly. The only real area where Carlton managed to break with Essendon was efficiency in the forward 50. Essendon had more entries in total, but Carlton were just that bit smarter and more composed when doing so.

Liam Jones has long since moved on from his former whipping boy status to enjoy a level of cult hero worship at the Blues, but even an intercept marker of his ability shouldn’t have found it so easily so often, especially when playing on the smaller Tippungwuti during stages of the game. While the tried-and-true bomb to the spot 20 out is practically tradition in footy, if you have a player with Tippa’s speed, it’s criminal to kill him by kicking it in the air when his opponent is a foot taller.

Make no mistake, Essendon could have won this if they had one more conversion from a 50 entry in the third quarter to set up a closer final 10 minutes, but that little lack of polish meant they had to play catch up footy at the death and it just got away from them.

Carlton however looked far more composed than any Blues squad I’ve seen since… well… I can’t even remember when. It would probably be a squad that had Craig Bradley in it, so long ago was the time I could use “composed” and “Carlton” in the same sentence. Carlton fans have felt this many times before though, so they’ll probably be looking for a few more scalps before the bandwagon starts in earnest.

Oh, I get it, you see a couple of hundred words and you want the single paragraph gist?

OK: Close contest, Carlton won by being a little classier in their attacking midfield, Saad booed, Dow KO’d, Hooker with five, Tippa and McKay with four, and Harrison Jones and Matthew Owies having breakout games.

Essendon have a six-day break and head to GIANTS stadium to take on GWS. It’ll be a very tough one for them after two bruising matches, and with the GIANTS cruising past Adelaide. I’m leaning towards the GIANTS simply because of the intensity of Essendon’s last few matches.

Carlton will face a huge challenge against the Western Bulldogs at Marvel Stadium. It’s not an impossible task, but the Dogs are a very complete team and are likely to have just a bit too much physicality and outside run for Carlton.