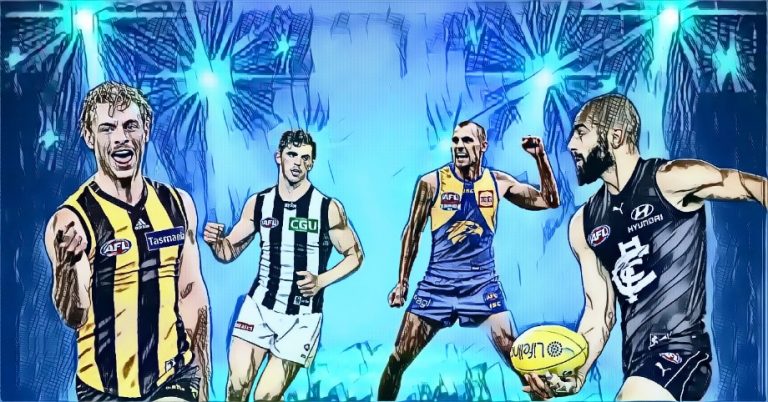 In The Spotlight – Round Seven

Another week of action-packed football has come and gone. Some players shone, whereas others failed to fire. Let’s take a look at last week then get into another round of who will be In The Spotlight.

SHANE MUMFORD: Dropped in a surprising move, listed as “managed’.

TOM PAPLEY: 12 Disposals, three marks, 1.1
Shut down by Sean Lemmens, may have been hobbled by an ankle after a Touk Miller rundown tackle in the first quarter.

BRANDON PARFITT: 16 Disposals, four tackles
Differed to a more passive role as the Cats got well on top, did what he had to

CHARLIE CAMERON: Nine Disposals, two marks, 3.0
Got on top and exposed Adam Saad’s average defensive skills, kept him on the move often and away from the ball.

MARLION PICKETT: 21 Disposals, two marks, five tackles, 0.1
Tried to get others involved from the inside (13 handballs), solid game but like his team, was a little off the mark

HUNTER CLARK: 18 Disposals, three marks, one tackle
Not his fault, but was unable to impose himself as the Power forwards kept him on the move often

With Josh Dunkley now ruled out for around 12 weeks after his shoulder operation, somebody has to stand up. On the “eye test” Hunter looks to just be willing to stay on the outside and get the ball if it comes his way. He is down four touches a game from last year (with reduced quarters) which tells me he is either an afterthought in the Doggies midfield, OR he is simply content with the depth and happy to play his role.

Hunter is one of the cleanest midfielders in the game and my belief is that he is simply content at the moment, however, I think he truly needs to impose himself once again, before others actually question the value to this great team.

Plain and simple… this dumpster fire of the past 12 months is still burning hot. A loss to the Suns could potentially spell the end of the tenure of coach Nathan Buckley. Despite being a premiership captain, 3x Anzac Day medallist, Norm Smith Medallist and the longest-serving player (and captain) of the storied history of the Pies, the skipper has never been at the forefront of such adversity.

At age 33 he is still one of the best, and time and time again he had answered the call when the Magpies needed him. His club has arguably never needed him more than now, so expect a war with Hugh Greenwood in a season-defining clash for the captain.

With the Crows assortment of bigger bodies up forward, led by Tex Walker and debutant Riley Tilthorpe, the stage is set for the lovechild of Mark Rucciuto to emerge as a game-winner in this contest. Despite him spending some time on a wing last week, he has the potential to wreak havoc around the feet of the tall timber. He may be the man to play the defensive role on young Giant, Lachie Ash, who is coming off a career-high outing.

In the 2019 season, in the absence of Tom Mitchell, Worpel burst onto the scene by averaging 26 disposals and making Hawthorn fans around Australia, as well as the fans of the other 17 clubs, groan as Hawthorn looked to have found their next superstar midfielder.

Two years on and Worpel is averaging 17 touches a game and looks like a much different player. The tenacity and work rate around the ball has almost vanished, so maybe it’s a mental problem as well as a physical one? Just to put his midfield numbers into perspective, he ranks “average or worse” (AFL.com) in every single category besides “spoils” *as a midfielder

Maybe the reality is that James Worpel is what turns up at your door when you try to order Tom Mitchell from Wish.

I used to rate Cunningham as one of the better small defenders in the competition, however, I have come to a realisation that perhaps he is just a byproduct of the Swans (usually) outstanding zone defence schemes. Gold Coast, in particular, isolated him, and he looked like an average player.

While I understand that all players have off games, he looked particularly uncomfortable when getting out-bodied by the small forwards that don’t mind contact. Ainsworth and Rankine feasted on him, and he may be sent to curtail speedster Gary Rohan or Luke Dalhaus this week.

Motlop is rounding into form nicely in 2021, however, I’m predicting Motlop could be the one sent to curtail (arguably) the most dangerous half back in the game, in Daniel Rich. This occurs as Connor Rozee works up the ground and Fantasia operates a lot closer to goal, In this scenario,  Motlop seems comfortable in the middle zone, which is also where Rich likes to set up shop.

The speed and class of Motlop will keep Rich busy, but he also has the discipline to sacrifice his game to make sure Rich is not allowed to use the howitzer masquerading as his left leg. Motlop also possesses the nous to drag Rich into vulnerable positions where he can be exploited offensively.

The debut of Ben Brown could have not come at a worse time for the luckless Kangaroos. Already decimated by injury to their defence, their task just became even harder, likely pushing a 15 goal hiding to 20+.

Melbourne could not have picked a better fixture to ease Brown back into the ranks. He has had his well-publicised injury issues and they can expect him to get through this game at a comfortable pace

*No disrespect to Roos fans, however, I’m a realist and they’re up against a top-two team in the comp right now.

He narrowly avoided “Brett’s Blast” last week, however, I singled him out for his absolute lack of defensive intent (which is nothing new). Based on the uproar of Blues fans, I knew it was only justice to put him In The Spotlight. Saad is your dream sports car… he may go 0-100 in three seconds flat, yet he is bloody average when going in the other direction.

The reasoning behind his Essendon defection have really come to the surface, as in last week’s game he was responsible for no less than five opposition goals – his efforts do not match the pay packet. Maybe a move out of the back-line is on the cards, as at the moment, the offence he provides does from half-back does not really outweigh his lack of defensive input.

With Hurn and Kennedy waiting to be named for the Western Derby, I decided to go with fan favourite, Dom Sheed. He looked way off his game last week (as did all the Eagles) however his demeanour surprised me as he did not really look focused on finding the footy.

Sheed is a brilliant player, but only when he wants to be. He is almost ready to take that next step in his football growth as a top tier guy, however, he needs to work on beating defensive attention and adversity by trying to use his head, rather than his body. If he can find consistency, he becomes much more valuable to the Eagles, as at times he runs Hot and Cold like water in a bad rental.