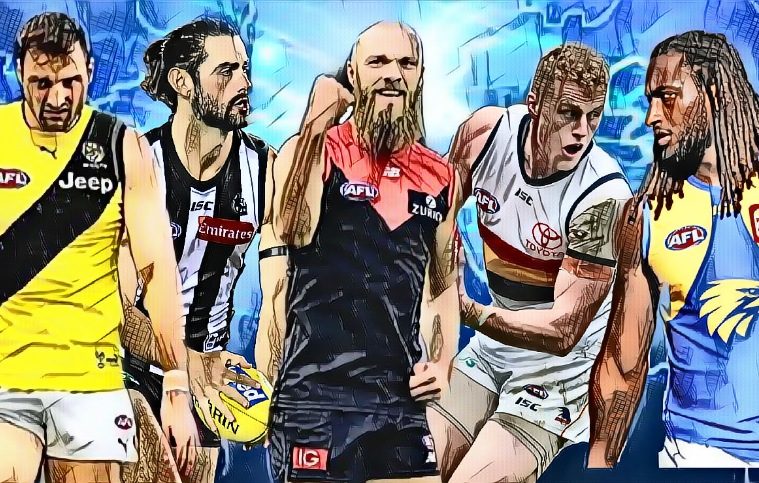 Welcome back to the ruck rankings after round six. There is genuine daylight between the top two ruckmen in the competition and the next best, while it appears that every ruckman I get behind gets injured. Meanwhile, a few Brobdingnagians have returned from injury in a big way.

Extremely difficult to split these two and there will be some disappointed readers from either party. But the dominant big man of the last two weeks goes to Max Gawn. He absolutely towelled up Ben McEvoy in round five with 24 hitouts (nine to advantage), 26 disposals, 19 contested possessions, a goal, and most importantly, eight contested marks as he chopped off any high ball in his vicinity. He had another brilliant game against Nankervis with 30 hitouts (16 to advantage) 22 disposals, 12 contested possessions, seven intercept possessions and four contested marks, as he leads Melbourne to an undefeated start.

Brodie Grundy is super stiff. In round five he started like a house on fire against Nic Nat, working him over in the first quarter to kick two goals, as he made an impact in the air which was what Collingwood needed in the forward line. Nic Nat eventually got on top of him as the Eagles stamped their authority on the game, but Grundy finished with 20 disposals, 15 contested possessions, 25 hitouts and seven tackles. He backed this up against Andrew Phillips and the Bombers on ANZAC Day with 40 hitouts (14 to advantage), 19 disposals, 17 contested possessions, another seven tackles, a goal and ten score involvements. Gawn was arguably more physically influential over these two games but Grundy is right on his tail.

Reilly O’Brien continues his hot streak following a poor start to the season. Posting fairly similar numbers across the two rounds, he averaged 18.5 disposals, 11.5 contested possessions, 36 hitouts (12.5 to advantage), and took three contested marks against the Hawks as he got over the top of Ben McEvoy.

One unsung big man getting the job done is Sean Darcy. He is putting together a little purple patch after returning from injury and sharing the ruck duties with Lloyd Meek. Fremantle finally have their optimal ruck-forward combination back with Darcy back, ably supported by Rory Lobb as a tall forward and pinch-hit ruckman. Against some fairly decent opposition in O’Brien and Goldstein in the last two weeks, Darcy has averaged modest numbers of 31 hitouts (11.5 to advantage), 6.5 score involvements, 6.5 tackles, 14.5 disposals and 11.5 contested possessions.

There are a few names who could sit in fifth position. Notable mentions include:

But Toby Nankervis is the one who makes the cut. In round five he had a colossal game against the inexperienced ruck duo of Hunter and Carlisle, with 40 hitouts (13 to advantage), 22 disposals, 14 contested possessions, and 6 clearances, tackles, and score involvements. Against Melbourne the week later he only had half of Gawn’s hitouts but his work around the ground was super impressive with another 22 disposals, 19 contested possessions, and a career-high seven clearances.

The leaderboard sits at:

Back to the rankings, which capture who is surging and who is falling in terms of form.

Low hitout numbers for NicNat in recent weeks due to the fact that Nathan Vardy has been utilised a bit more – 27 ruck contests for Vardy last round compared to NicNat’s 57. Had his colours lowered a little by Grundy but levelled the playing field as the game went on with two big contested marks. Only 25 hitouts against Stanley but his contested work remains ever elite, going at 89% contested possession rate in the last two weeks and seven clearances a game.

Given any other round this would probably be a very generous position for Sinclair, but his barnstorming performance against the Suns holds this position initially established by Hickey. Speaking of Hickey, he was having another decent game against Mumford with 23 hitouts and 16 disposals before injuring his knee and was subbed off in the fourth quarter.

The GWS boys into the top six off the back of Mumford’s game against the Swans. It is interesting to note that Mumford leads the ruckman for clearances and tackles on average. Flynn returned in round six and was soundly beaten by Stef Martin especially after half time. Had 22 hitouts and six marks, all contested. The way he’s going, I think GWS may prefer Mumford as their number one ruckman which puts Flynn in a bit of strife, but I’m all for it. Watch Mumford get injured now.

Responded well after a disappointing last few weeks. Racked up 28 hitouts (10.5 to advantage) in both rounds as well as 16 disposals, 8.5 contested possessions and seven score involvements.

His colossal effort against the Suns was somewhat of an outlier as Pittonet returns to the pack following a quieter fortnight. Had his colours lowered by Lycett who restricted him to 18 hitouts (three to advantage) but a promising eight contested possessions and six clearances. He returned to form against Oscar McInerney with 31 hitouts (13 to advantage) and six clearances. Averaging just 10 disposals across the two weeks does hurt his rank.

An uncharacteristically poor year from Goldy so far, another one who I had high hopes for. His influence is perhaps quelled by the addition of Tom Campbell to the North Melbourne side, who attended 25 ruck contests last week in comparison to Goldstein’s 43. Campbell ended up having 15 hitouts in the game whilst Goldstein had only 18, but had 18 disposals and kicked a goal. The week prior, Goldy had a more convincing 29 hitouts but was convincingly beaten around the ground by Stanley who had 24 disposals, compared to Goldstein’s 10.

Big O is breathing down Goldy’s neck following an injury-free and in-form last few weeks. After registering 30 hitouts against Peter Wright, he had great battle with the aforementioned Pittonet in a hit out fest, racking up 35 hitouts (18 to advantage), nine contested possessions, eight clearances, and a goal.

I feel like it won’t be the last time I write about these three in the same column given the fragility of the Saints ruck stocks. Hunter and Carlisle got absolutely demolished by Nankervis in round five, with the only notable stat coming out of that game being Hunter’s 18 hitouts. But the Saints towers hold their rank off the back of Marshall’s game against Lycett last week. In this game, Marshall once again proved his solo ruck capabilities with 23 hitouts (seven to advantage) 16 disposals, 13 contested possessions, six intercept possessions, eight marks (five contested), seven tackles and a goal. On average, Marshall leads all ruckmen in marks and contested marks. With Paddy Ryder set to return in the coming weeks, the Saints will be very pleased to have their A-grade ruck set up back as they look to address their centre-bounce issues.

Like Goldstein, McEvoy has suffered a drastic decline since the beginning of the season. He has had his colours lowered by Gawn and ROB in the last fortnight, averaging 12 disposals and 20.5 hitouts (eight to advantage), but also clunked three contested marks and had three tackles against ROB. With Ceglar firstly omitted and then injured, McEvoy has had to shoulder the ruck load alone and hopefully, it is not too taxing for his old body.

The Bulldogs made the most of the Suns ruck matchup in round five and chose to rest their veteran Stef Martin. Jordan Sweet came in for his debut and he wouldn’t have dreamt of playing an easier opposition in his first game! Against Graham and Burgess, Sweet had 31 hitouts (10 to advantage), four tackles and five score involvements. It’s safe to say that Sweet won’t be eclipsing those 31 hitouts for a while. Martin returned the week later and combatted against Flynn with increased help from English. English took on greater responsibility as the second ruck with 37 ruck contests in comparison to Martin’s 51. This change in tactic was rather effective with Martin having 28 hitouts (11 to advantage) while English had 17 with eight to advantage. Both big men kicked a goal as they commanded the ruck contest.

A much better performance from Stanley but still not enough to make a significant leap up the rankings. Overworked Goldy around the ground in round five and had 24 disposals, but was well beaten in the air, registering a mere eight hitouts. He played a more balanced game against Nic Nat with 22 hitouts (11 to advantage), 15 disposals, six intercept possessions, three tackles, and nine score involvements.

Bringing in Phillips for the ANZAC Day clash against Grundy was a move that paid great dividends for Essendon, allowing Wright to move back to the forward line and play as a pinch-hit ruckman. But let’s talk about Wright first. He played a great game against McInerney in round five with 27 hitouts (10 to advantage) and five tackles. His ruck craft seemed to get better and better the more weeks he has played in the role. Phillips wasn’t too dominant upon his return, posting 19 hitouts (nine to advantage), a goal, 12 disposals and six clearances. Wright jumped in with 11 hitouts, and the two had 14 score involvements between them. This is a much better ruck-forward set up for the Dons as it gives them a proper key forward option and a serviceable ruck until Draper returns.

As the writer of this article, I am praying that Zac Smith returns as soon as possible because there’s not much to write about for these two. In the last fortnight, they’ve had 33 hitouts combined. Gawn averages 32 hitouts. Enough said.