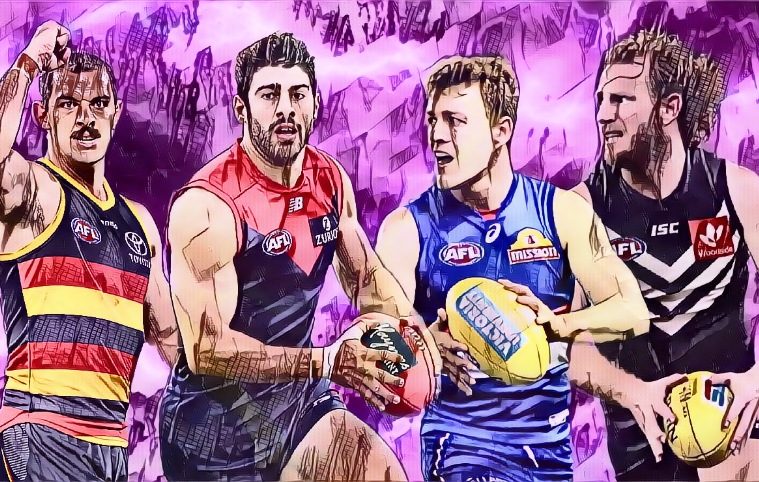 Last week I raised a question about each team to conclude this piece. I will answer those questions at the end. But to begin this week, I thought I’d throw out a sentence that fits your team perfectly. Don’t worry, you’ll know which one is allocated to your team.

You’ll be fine, it’s only Round Six.

Can we please start playing some good football?

Weren’t we supposed to be better than this?

You’re the team to beat.

How about next week I tell you who fits which sentence?

Reading the comments from the last few weeks, there seems to have been some confusion. At the start of every piece, I will be posting last week’s team here, so everyone can catch up on how the 22 looks before we make any changes.

The clubhouse leader in spoils and contested defence one-on-ones, Jacob Weitering is again staking a claim as the best key defender in the competition. Last week, in the battle with Aliir Aliir for the centre half back position, it was said that given the Blues deficiencies ahead of him, a lot more has always been asked of Weitering, and he has delivered time and time again. This week he left no doubt, with 21 disposals, seven marks, three clearances and 11 rebounds from defence.

FULL BACK: STEVEN MAY (MELBOURNE)

Well, that didn’t last very long. After sustaining an eye injury just two weeks ago, Steven May has returned to both Melbourne’s, and more importantly, the Mongrel AA defence. Picking up right where he left off, May was instrumental in the Demons’ win over Richmond, with 24 disposals, six marks, and 11 defensive rebounds. May slots straight back into our defence as a reward for his excellent form pre-injury.

I can already feel the torches burning, but just hear me out on this one. Gold Coast have lost arguably their two most important players; captain and ruckman, Jarrod Witts, and young gun, Matt Rowell. Despite this, and despite no other real forward line threat to help him, Ben King has taken his game to another level in 2021. Only once has King kicked less than two goals this year, and he has improved in every major stat across the board.

Praise the Lord, David Mundy is in! After gathering 30 disposals and kicking three goals, Mundy has finally burst through the front door and taken his rightful place in the 22. Mundy is the blueprint for why players shouldn’t be pushed out the door when they’ve still got gas in the tank. Fremantle’s army of young midfielders are clearly benefitting from having Mundy alongside them, and his experience has been invaluable in all of the Dockers victories. Whether this is final year remains to be seen, but for right now, Fremantle are still a much better outfit with Mundy in the starting 18.

Harry McKay moves from the forward pocket to centre half forward after a dominant performance against the Lions. McKay made Harris Andrews look B-grade for much of the afternoon, and almost singlehandedly dragged his team across the line. Moving to outright second in the race for the Coleman Medal, McKay more than deserves the second key forward spot in our team.

Despite missing the ANZAC Day match, Jordan Ridley had to retain his place in our line-up, given his stellar form before his concussion. Given he should return this upcoming week, I felt that the week off shouldn’t impact his place. However, Jacob Weitering has played every game, and simply has more minutes of excellence under his belt. Given all of these factors, I felt it only fair to move Ridley to the interchange bench for this edition of the team.

Nathan Buckley’s decision to move Darcy Moore forward certainly raised a few eyebrows, and this experiment continued on ANZAC Day. Collingwood supporters will argue that Moore was shifted back to his natural habitat in the second half, but late in the game he made a critical error that resulted in an Essendon goal. Moore is without a doubt one of the best key defenders in the competition, and if he stay in defence he has the skills to work his way back into our team, but when you play forward for a game (and a half), and don’t exactly play well, you will find yourself on the chopping block. It’s that simple.

The injuries in West Coast’s midfield have hurt one player more than most. That man is Tim Kelly. Down on form slightly since Round Three, Kelly suffered the most in the Eagles capitulation to the Cats. Gathering just 16 touches, Kelly had next to no impact on the game, and hasn’t been at his superstar best for a few weeks. Players have gone past him, and in the end the decision was easy. When on the interchange bench, your position in the team isn’t as strong as others, so Kelly drops out this week.

Jack Riewoldt comes in off the back of four goals. A week later, Richmond plays poorly, Riewoldt is well held, and he drops out in favour of Ben King. When deciding on the third tall in the forward line, it was a choice of two players on 19 goals, and one on 18. So why King, when both Riewoldt and Josh Bruce have hit the scoreboard more often? Simple. Their respective midfields. I mentioned last week that Bruce benefits from having the best midfield in the competition delivering him the ball, and Riewoldt is no different. Both players also have a forward line partner in crime to take the pressure off, while King must go it alone. Therefore, it was King that stood out, earning him the spot over Riewoldt.

Finally, when the decision was made that Weitering was coming into our backline, and Jordan Ridley retaining his place (but moving to the bench), it left us with four players to fill three interchange spots. Mundy, Wines, Steele and Merrett. Wines and Steele were best on ground, so they stay. That left us with Merrett vs. Mundy. There were arguments aplenty, but ultimately Merrett is the unlucky player to lose his place. This is not because Merrett is out of form, far from it. Merrett is just the unfortunate player that makes way for the incoming Mundy.

So with all that plugged into the database, here is our current, updated team:

IN: Weitering, May, B. King, Mundy

I’ve got seven players that are in contention, but narrowly missed out on selection for various reasons. Let’s quickly go through them.

Jack Ziebell has been resolute in defence for the Kangaroos. He is averaging eight more possessions that his next best year, and on the weekend gathered 37 disposals and 14 marks. However his team still lost by nine goals, and most of Ziebell’s disposals were in defence, and he didn’t move the ball out of the back half anywhere near as much as he should’ve. The other defender of the bunch is Demon Christian Salem, a man also in career best form. Salem is averaging career high numbers across all the major stats, and is one of the main reasons behind Melbourne’s charge towards September.

We’ve spoken about Cameron Guthrie previously, and he just continues to build another dominant season. One of his side’s best, Guthrie is in a group of players fighting over limited midfield spots. Marcus Bontempelli, Travis Boak and Jaeger O’Meara are Guthrie’s challengers, and each are putting together seasons of excellence. Bontempelli sits behind Macrae and Dunkley at the Dogs, but Dunkley’s injury will open the door for the Bont to burst through. Boak has continued his 2020 form, and has been neck and neck with Ollie Wines as Port’s best midfielder. Wines is ahead, but only slightly. O’Meara has also battled with Tom Mitchell for the title of Hawthorn’s best mid, and with the spotlight on Mitchell, O’Meara is perhaps in career best form. The other midfielder to profile is wingman Hugh McCluggage, who returned to form in a stunning display of class on Saturday afternoon.

Uh-oh. That daunting Western Bulldogs midfield now has the smallest crack, with Josh Dunkley injuring his shoulder so badly it needs to be completely reconstructed. It could be argued that this alone should warrant Dunkley being dropped from the line-up. However, we have set a precedent that must be followed, and Dunkley’s case is no different. His form in the first six rounds is more than enough for Dunkley to be included in our midfield, and until next week, when he is no longer on the field, he shall remain exactly where he currently is.

The same can also be said about Dustin Martin. Yes, he did only touch the ball a measly eight times on Saturday night, being completely shut out of the contest by Michael Hibberd. He also suffered a head knock, ruling him out for 12 days. But this is Dusty. It’s also quintessentially Richmond. They always play the long game. I’ve heard so many people say they’re worried about the Tigers this year. I am not one of those people. They’ll turn it around, like they always do. They’ll peak in September, like they always do. And it’ll be Dusty leading them to glory. Like he always does.

Finally, it could be argued that St Kilda’s win/loss record, as well as their percentage, would be reason enough not to include any Saints player in the team. Collingwood also isn’t represented either. We must, however, make a special exemption for Saints skipper Jack Steele. I shudder to think where St Kilda would currently be without Steele, as he has been their best player by the length of the Flemington straight. Later down the track, if the wheels keep falling off, Steele may find himself in trouble, but right now, he has done enough to remain in our line-up.

Do yourself a favour. Go back to last week’s team article, and read the conclusion, where I raised a question about each team. Are you up to speed? Good, because I will answer each question right now.

Are the Swans looking shaky?

Can the Crows keep their season alive?

Yes, and Thilthorpe will be a star.

When will North Melbourne win their first game?

Has Victoria killed the Lions?

How long will Bucks survive?

Can the Saints fix their woes?

They’ll need to in a hurry.

Who will stop the Tigers?

Will the Dogs or Demons blink first?

Can West Coast win away from home?

Are the Bombers really a bottom four team?

No, they may challenge for the eight.

Have the Giants turned the corner?

Yes, to an extent.

Can Clarko save the Hawks?

Yes, but he won’t coach their next flag.

Does Ken have the Power to win?

Yes, they’re the team to beat.

Does Teague have the cattle?

Yes, but they need realise their potential.

Have the Dockers found Mundy’s replacement?

Yes, and there’s more than one candidate.

Can the Suns win without Witts and Rowell?

Yes, and you just saw it.

Are the Cats too old?

No, but this is their last chance.