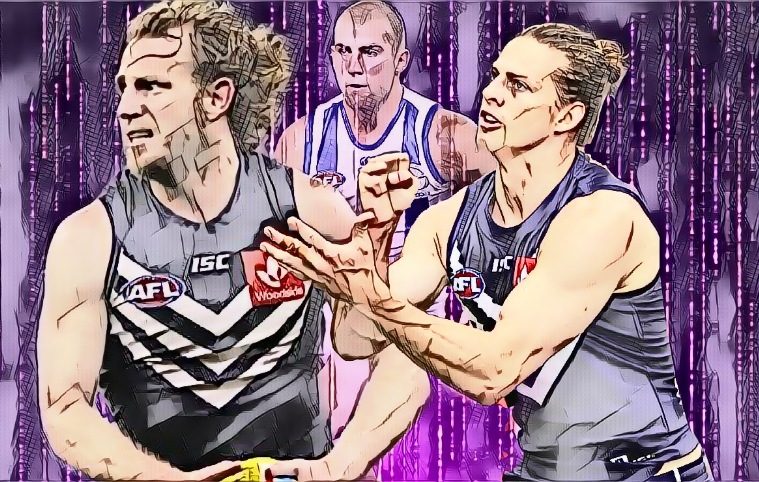 In a contrast to the other Saturday night game being played in front of 85,000 fans, this game was played in front of zero, thanks to a harsh WA lockdown. And speaking of things that no one watches, the Oscars are on this weekend and I’ve decided to do an Oscar theme review for this game.

The Categories are Best Actor, Best Supporting Actor and Best Director. There will be some explanation with each category and how each player was decided upon. There will also be an Oscar comparison to some prominent identities.

But first a brief note about the game:

North Melbourne turned up to play in this game. You’ll forgive the focus on the Kangaroos in terms of effort as, like most pundits, I had Fremantle comfortably winning this game ahead of time. The first quarter was a real arm wrestle. Both teams putting on significant pressure in a really contested game. Freo enjoyed the late lucky break and went into quarter time eight points up. I still can’t believe the umpire paid that mark to Taberner. I mean, it got him going, but it was clearly after the siren and with no crowd to hinder the umpire’s ability to hear it, I cannot understand how they let it go.

Fremantle blew the game apart in the first ten minutes of the second quarter. A quick four-goal onslaught put the required space between themselves and North Melbourne. The Kangaroos would continue to fight and be competitive, but from that point on they would not get within 20 points of Fremantle for the rest of the match.

The third quarter was another contest. The Kangaroos came out reinvigorated to try and put the clamps on the Dockers and fight it out and try and force the game into a scrap. They returned to dropping extra numbers back at every chance to ensure they weren’t heavily scored on again. This defensive footy did stem the tide in terms of Fremantle’s scoring, but it also made it near impossible for North Melbourne to build any momentum of their own. I guess these are the decisions you have to make when you’re teetering on the edge of being competitive and getting blown out of the water.

This would repeat for the last quarter, as it would take the Dockers over 35 minutes in each to finally break the Kangaroos spirits and score consecutive goals to push the margin out. The likes of Taberner and Schultz would “cash-in” and add to their tallies to improve their stat lines.

Let’s get into the categories:

This category is fairly self-explanatory. This is your teams leading man. The Star. This, of course, limits this field to a select few on each team. They had to have had a heavy presence in this game and most likely have a preceding reputation in order to be considered.

Oh yes, we’re starting here, with our Leo. The guy with the looks, the talent, and the work ethic, just not the final delivery. Fyfe is close to the perfect player, but his finishing around goal is clearly becoming a consistent theme that is going to be an easy out for detractors to point to, to try and lessen his impact on games when having their “best player” conversations.

Much like when Leonardo DiCaprio and Matt Damon and Ben Affleck are thrown around, in discussions for the actor of their generation, I’d hate for Fyfe to end up the Affleck in the discussion, when he is clearly a DiCaprio (Nothing against Affleck).

Fyfe’s performance in this game was much like Leo’s in The Revenant. Real method stuff going on. Fyfe was doing the dirty stuff and in full commitment mode for the team, whether it was farming the footy out in tight, putting his body on the line in the air, or throwing himself at the footy in attempt to smother a Kangaroos forward thrust.

This might be a bit of a giveaway, but Mundy played this game like Daniel Day-Lewis in There Will be Blood. An experienced professional putting in a masterful performance that elevates those around him. When Mundy was on the screen, he demanded your attention, and not just because his lustrous head of hair.

He near impersonated Tim Watson at one point when leaped over a North Melbourne defender before steadying to kick his second gaol form inside the goal square. Commentators continually reference retirement when discussing Mundy, which is completely due to his age, as he is playing as good of footy as he has ever played.

Mundy is in no way in the Eddie Betts category of almost limping to the Line. Mundy is still sprinting and passing younger players, probably thinking to himself. “I’m going to drink your milkshake too”.

Cunnington was the angry man on the ground. A dogged performance by Cunnington, often matched up on the likes of Fyfe or Mundy who looked to expose him going the other way. You cannot fault his effort, he lead the ‘Roos in clearances, contested possessions and tackles. But against the Dockers it wasn’t enough. Just like Brad Pitt in Moneyball, Cunnington did the work, fought the good fight, and came out on the losing side.

David Mundy for “There will be constant age references”.

Another simple one. These are the other heavy hitters. Don’t be fooled by the “supporting” tag, these performances are just as impactful as their leading counterparts in most cases (usually just a slight step to the side) and in some cases, can end up being more valuable to the final outcome of their production.

Ladies and Gentlemen – Meet Javier Bardem. He’s not your leading man, but with the amount of time and effort teams should be investing in him, he is damn well close. If not for the current glut of talent in the Freo midfield, Serong would be copping the deserved attention for a player of his abilities. Serong is an absolute gun, and he is not getting the recognition he deserves from people outside of Fremantle supporters. Just like how Bardem was somehow not nominated for his performance in Skyfall. Serong is likely having to work twice as hard as others for half the recognition. Yes, I’m aware he won the 2020 NAB rising star award, but I reckon if you asked half of all AFL fans, they couldn’t tell you that.

A solid performance from Simpkin without being great. A bit akin to Phillip Seymour Hoffman in Doubt. Worthy of a nomination but not a winner. Simpkin had his moments where he looked threatening but couldn’t really assert himself on the contest. Now getting to that 80-game mark, is it unreasonable to start expecting Simpkin to become a bankable quantity?

Probably not in terms of talent, but in terms of awareness I would compare him to Mark Rylance. This is no slight on Hughes, it’s just that Rylance is that good of an actor. Hughes copped a pretty decent hit early in this game, and it surprisingly wasn’t even awarded a 50-meter penalty, despite being likely to draw the ire of the match-review officer. Hughes recovered and did not let the hit affect him at all. He continually proved driving force for the Dockers as the game went on.

What’s that? Why it’s Robin Williams from Good Will Hunting. Schultz played his role perfectly in this game. A career night for him, slotting four goals (one in each quarter). He won’t feature on any stats boards, but his impact on this game was profound. Not the star of the show, but came in, gave a virtuoso performance as a small forward, and then stepped back out for his leading men to do their thing. A perfect supporting role.

Caleb Serong for “No Recognition for WA Players”.

Directors are leaders. Organising all the moving parts around them to deliver a vision for the way their team operates. This is where your “Generals” and “Pillars” receive their dues.

Another game with a lot of kick-ins for Jack Ziebell but let me tell you how his game was so much more than that. Ziebell was huge for the Kangaroos in this game and an absolute rock down back. Yes, he had a few kick-ins in his 37 disposals, but he also has a game-leading amount of intercept possessions and metres gained. Regardless of location, when you kick the footy over 30 times and have a disposal efficiency over 90% you’ve had a really good game. This is why Ziebell is my David Fincher.  The perennial snub at the Oscars despite directing some of the best made films of the last three decades.

A left of field selection for this category but bear with me. Darcy is really coming into his own in this Fremantle side. A towering figure, I gave the points to him in this game over Goldstein and Campbell. He more than held his own in the hit outs, but more importantly, he didn’t allow Goldstein to give any silver service to the Kangaroos midfielders, which allowed the Dockers to really press their advantage at ground level. Darcy even managed to sneak forward for a goal. However, it was Darcy’s eight tackles that really stood out for me. A big man who follows up his work around the stoppages. It reminds of Mel Gibson in Braveheart. Directing, Starring, Producing. Darcy is a triple threat.

Jack Ziebell for “The Curious case of the Kick-in Hoarder”.

There are plenty of players that have been left off the board, but that is the joy of the Academy. Not everyone can be nominated…

The Dockers will be heading to the afterparty to get their statues engraved and dance on into the night. Well, they’ll be doing so in their own socially distant living arrangements with no interactions with the general public, I guess. Fremantle have now won four of their last five matches and are in red-hot form. This, combined with West Coast’s Jekyll & Hyde form across this year should be setting up a huge Derby next weekend. However, with the potential of no fans being in attendance, it could be quite anti-climactic.

Things only get worse for the Kangaroos. Possibly stuck in Perth during a snap lockdown. Potential issues with their Tasmania fixture. And to top it off, they’ll be playing the rampaging Demons. It’s not always like this, North fans. The sun will shine again.