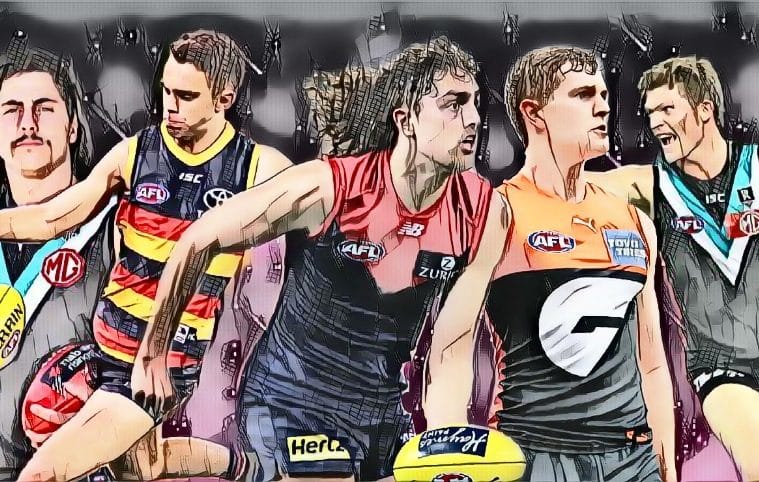 The Giants midfield bull along with Tim Taranto and Jacob Hopper, has been a large part of the reason for the stunning GWS turn around in form over the past few rounds. Big Tom was in the thick of the action all night as he racked up 24 disposals, six clearances and five intercepts on the congested SCG turf.

Both coaches were duly impressed with his presence as they each awarded him votes in the AFLCA award. I’ve long maintained that while the Giants have lost plenty of midfielders along the journey, the ones they truly wanted to keep have remained west of Sydney. Green falls very much in this bracket.

The three-headed Power monster was in full flight at the MCG on Saturday night, as the young forward collected the official Rising Star nod with a scintillating game in a strong Port victory. His 15 disposals were won up as far as the wings as well in the more familiar surrounds of the forward 50, while his combative style crashed packs in the manner of his more illustrative teammate Charlie Dixon, claiming five strong marks.

An equal game-high three goals was terrific reward, but his coach Hinkley would have been just as impressed with the four one percent efforts Mitch contributed across the night.

Am I paying special attention to a player I thought Melbourne made a mistake drafting so high last year? Am I just impressed that a young ruck/forward is making a mark on the AFL so early in his career? Or am I quietly contemplating the fact that when Jackson plays it makes an already powerful force in his skipper Max Gawn walk even taller?

Perhaps a little bit of all three, but there is no doubt Jackson was a fine player on the weekend, allowing his best afield ruck partner to drift forward at times, while the youngster collected twenty-two hit-outs of his own, along with 17 disposals, five marks and eight score involvements in a mostly unheralded outing.

The budding cult hero needn’t have worried about second-game blues as he again produced an assured performance more expected from a ten-year veteran rather than a kid finding his feet in the big league.  Another ten intercept disposals, which has him sitting equal eighth in the league averages, coupled with four rebounds from defensive fifty among his 17 possessions would have his magnet safely allocated to a half back flank for the foreseeable future.

The Adelaide winger was again damaging, gaining 463m, just above his season average, placing him only behind long kicking Paul Seedsman on his team. 23 disposals including six entries into forward fifty and four out of defensive fifty were a good return on a disappointing day for the club, Sholl only mustering four touches in the last as a Mundy led Freo overran the Crows in the end.

Should enjoy the wide expanses of the University of Tasmania oval this weekend as he takes a clear lead in the Mongrel Rising Star award with this vote.

Archie Perkins, the Bombers’ number nine draft pick played the best of his short three-game career in the wet at the Gabba. 20 pleasing possessions gaining over 400m for his side, along with four tackles and five marks would have Dons fans grinning widely about their future prospects.

Jay Farrar, the rangy Suns forward plucked from Scotch in the Victorian amateurs was very encouraging in just his second senior match against a rampaging Doggies side. 21 disposals, eight marks, nine intercepts, seven score involvements and a ‘rising star’ leading five one-percenters would have had coach Dew pointing his efforts out to more established players to replicate.

Trent Rivers, the gutsy demon half back is knocking on the door of the votes, and perhaps cruelly I’ve denied him again this week. While he was very good at times, as 21 disposals, five marks and 10 intercepts can attest, his eight turnovers came at critical times in the first half and kept the Hawks well in the game.

A couple of South Australians made their move this week, and Sholl is now a clear leader on a hotly contested leaderboard. Looking to the past to try to pick a winner at this stage has brought some interesting facts, of the 28 former winners of the official title – 18% were number one draft picks, 32% were picked in the top three. Interestingly 21% were picked later than selection 25 in the national draft, while 4% (Danyle Pearce) is the sole rookie draft selection.

The Bombers, Port, Sydney, and Crows would be very pleased with what their young guns have provided so far this year, while at the other end of the spectrum a few clubs struggling on the ladder might be concerned about the lack of output from their youth brigade. I suspect the Magpies with McCreery and Macrae entrenched in the side are close to a breakthrough, while the Cats, Hawks, Lions still languish without a mention.