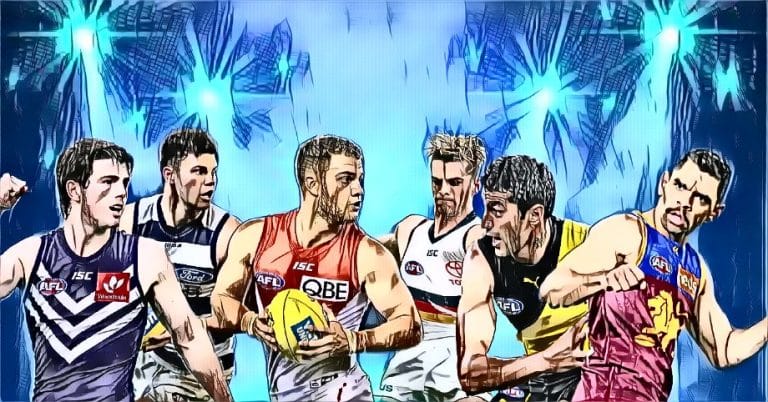 In The Spotlight – Round Six

Once again there was a mixed bag from the selections for last weeks games. Players shined, players shrunk, and once again, a player failed to get the opportunity to get to perform.

First off, let’s recap last week with some numbers and a few words.

DAN BUTLER: 11 Disposals, two marks, one tackle, one goal
Barely sighted in the contest, though Saints were completely dominated, recorded only 39 Inside 50’s for the game

MASON COX: DNP. Dropped in this match-up vs WCE, however would have made sense to play him based on the Eagles defensive structure. Didn’t do much in the VFL but surely comes in with De Goey out and Moore probably returning to defence after the injury to Howe

TOUK MILLER: 27 Disposals, eight marks, five tackles, three clearances
One of the few Suns that could hold their head up, tried his absolute guts out and was the primary ball-winner, due to the Bulldogs midfield being in complete control did not have a tag

JORDAN DAWSON: 23 Disposals, three marks, four tackles, nine rebound 50’s
Prolific in the first half with 16 touches, but faded out in the second half. Untidy at times (game-high six “clangers”)

LIAM JONES: Six Disposals, one mark
Very average game, was made to play accountable football and was targeted by Port often

LACHIE SHOLL: 23 Disposals, eight marks, three tackles, 1.0
Workmanlike performance from the winger, defensive running was a feature. Should be the new favourite for the Rising Star award.

PATRICK DANGERFIELD: 22 Disposals, four marks, one tackle
Rusty return from Danger with 46% efficiency on his 22 touches but he is set for another stint on the sidelines due to an ankle injury.

SHANE MUMFORD: The “Big Mummy” comes up against the Bulldogs vaunted ruck partnership this week in a classic Immovable Object vs Unstoppable Force. Mumford was huge last week against the Swans, throwing his weight around and providing a headache all day. The Bulldogs blooded Jordan Sweet last week vs Gold Coast, however, I suspect they recall the rested Stefan Martin to battle it out against the Gigantic Giant.

Mumford was a game-changer through the centre, with eight clearances and 31 hitouts, however, he must keep his aggression in check as he gained four frees but also gave four away. The Bulldogs midfield is near on unstoppable when given clear ball from the stoppages. Expect him to launch into Tim English at every opportunity presented, and provide his ample frame as a roadblock to assist his injury-riddled midfield

TOM PAPLEY: This match-up should present little challenge of a player of Papley’s abilities and skills, however, which version of Tom will we see in this game?

At times in 2021, he has appeared to be content with a more supporting role on face value, however (in the early going) his numbers are actually improving on last year (numbers that earned him a nod in the All-Australian squad of 40). He is still a bit wasteful with his possessions, however, his goal numbers are slightly up from last year as well and he is looking to get others involved. his chemistry with Errol Gulden, in particular, is noticeable.

With Lance Franklin out injured, Papley is primed to once again be a focal point in the Swans attack, but it will be interesting to see if he is manned up by elder statesman, Jarrod Harbrow, or if he is set a challenge to keep the Suns’ chief “rebounder”, Jack Bowes, busy.

I’m expecting a massive game for Papley in this contest, and the threat of a bag is definitely on the table. Even when sporting a healthy list, Gold Coast have had their trouble in the past containing elite small forwards.

BRANDAN PARFITT: With the loss of superstar Patrick Dangerfield once again, a pivotal match-up against the Eagles midfield beckons. In 2021 Parfitt can undoubtedly lay claim to being one of the most improved midfielders in the AFL. In a lacklustre team effort against the lowly North Melbourne last week, Parfitt shone through the full four quarters and proved his early season form so far is no fluke.

Averaging 21 disposals and 3.5 clearances against his career numbers of 16.7 and 2.1, his career is really about to take off. What makes his numbers all the more impressive is that the Cats have largely had a committee approach to their ruck position. He will likely avoid any close checking from Nelson or Redden in this contest, and his damaging disposal may be about to really be unlocked with the incoming debut of star recruit Jeremy Cameron.

CHARLIE CAMERON: To say the mercurial forward is having a disappointing season so far would be like me saying that Chocolate Milk is the king of flavoured milk. It’s so blatantly obvious, and it barely needs mentioning.

Possibly due to the arrival of Daniher forcing Cameron further up ground than he is more comfortable with, he has not had the impact most were expecting. After kicking 31 goals in 2020 he has started off with only five goals in five games – frustration appears to have set in as he gives away more frees than he gets ( a very common theme with the Lions) but also he averages just four effective kicks per game.

If things aren’t clicking offensively, he can always lift his defensive pressure. So far in 2021, he has had two tackles inside 50. That’s it. Cameron really needs to get on his bike before he revs up. Surely he can do something against the Blues’ decimated defence.

MARLION PICKETT: My fellow Manjimup Tiger. Three years into his AFL career and I’m not sure where his best position is, I don’t know if anybody does. He can finish around goals, he can ruck, he can tackle, honestly, he can do a bit of everything. However, I feel he is somewhat maligned as he is almost “the ultimate utility” as he isn’t known for one skill, yet has a whole range at his disposal. He showed in his debut he can perform on the big stage, and this contest will be the most watched game of the round… mark my words

His physicality in the midfield may be a needed commodity in the contest, battling the likes of Oliver, Petracca and Viney. I hope, for AFL fans alone, we see a Marlion vs Kysaiah contest at some stage.

ANDREW BRAYSHAW: Massive call by David King during the week, stating that the young Docker had risen to “a top 20, if not top ten midfielder” Well, by default the spotlight is on you now, young fella.

Brayshaw is starting to make people forget he was taken in the well-publicised Lachie Weller trade from the Suns, and has undoubtedly elevated his game, however, it has been noted that he has struggled with working through tags. Look for North Melbourne to likely throw a stopper his way, as he torched Adelaide last week with a game-high 33 touches and eight clearances.

BEN KEAYS: It’s about time Keays gets the respect he deserves for 2021. Masking the departure of Brad Crouch and the injury to Matt Crouch, the former Lion has been an outstanding acquisition. Mainly a rotational player with the Lions and used at times as a tagger in 2020, Keays has exploded in his full time duties in the Crows midfield and is averaging 26 disposals a game. That’s the lazy ten more than his career average.

He looks so much better hunting the football rather than just tasked with stopping his opponent and with a little more polish on his disposal, could take yet another step in 2021.

JORDAN ROUGHHEAD: I would expect Darcy Moore to start at Centre Half Forward in this contest once again to try to exploit the loss of gun Bomber, Jordan Ridley. The task will fall to Roughhead to battle fellow veteran Cale Hooker, as his impact will correlate with the risk of using Moore forward.

Roughhead is quiet, unassuming and possesses a high footy IQ, which will be vital in directing his depleted back-line. Coupled with the experimentation of Moore, the Magpies defence has also lost Jeremy Howe with a hamstring injury and also are without Mark Keane due to suspension. Expect Roughhead to do whatever the team needs to get the four points and relieve the pressure, at least until next week.

HUNTER CLARK: Clark has been brilliant for the Saints, and would be likely the only challenger to captain Jack Steele for the Saints Best and Fairest Award so far in 2021. His efforts, I dare say, have been criminally overlooked, as when mentioning “St Kilda” so far in 2021 it has been met with a barrage of comments where the keyword seems to be “disappointment”.

With that being said, Clarke has been one of the best defenders in the competition, and what has made his game even more impressive is often the lack of defensive midfield run their team gets on a weekly basis. Watch for Port to try to drag him up the ground, to limit his ability in disrupting forward 50 entries. Perhaps that responsibility falls to the enigmatic Connor Rozee.