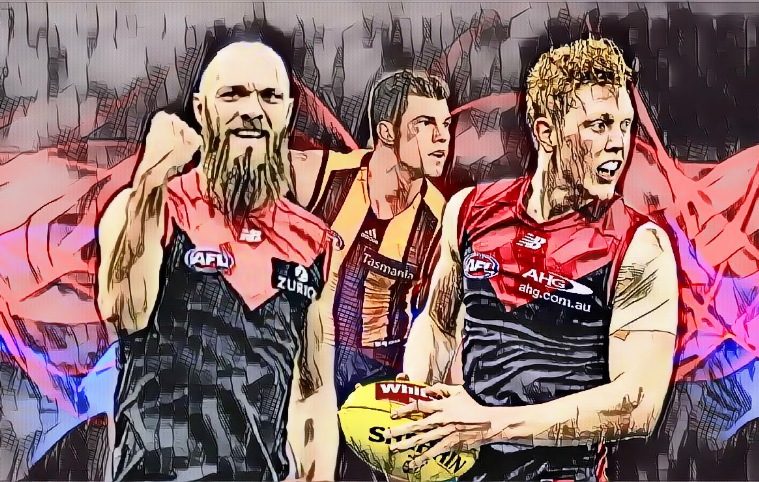 It was a tight tussle between Hawthorn and Melbourne…for three quarters at least. The Hawks were within a goal 15 seconds into the final term when Dylan Moore kicked a goal but from there, the Demons went on a rampage, kicking five in a row to blow the result out, eventually winning by 50 points.

The back-and-forth nature of the first three quarters, combined with each team not always converting on the scoreboard made for an entertaining game, full of high-pressure situations.

Tom Mitchell and Jaeger O’Meara were the main possession winners for the Hawks while Luke Bruest, Tim O’Brien and Oliver Hanrahan kicked two goals each. For the Demons, Ed Langdon and Jake Melksham kicked three majors each as Christian Salem and Clayton Oliver had 30 touches.

WHERE WAS THE GAME WON?

The game was won through the middle.

Especially in the fourth quarter.

The Demons lost the clearance battle in each of the first three quarters but came to life in the final quarter. Overall, for the game, the clearances went 35-33 in Hawthorn’s favour but through a 10-minute window in the fourth term, it was the Demons who were getting the quick clearance from stoppages in the centre and around their forward half that allowed them to go forward with ease.

The Demons scored four of their eight goals in the final term from stoppages, with ruckman Max Gawn finding his midfield trio with clear, clever taps which allowed for a run forward a kick to leading Demon targets. The Demons won the hitout count too 48-21 and were much better efficiency-wise than their Hawk opponents.

WHO WERE THE FIVE MOST IMPRESSIVE PLAYERS?

Max Gawn was a presence everywhere and did everything. He had 26 disposals (an equal-third career-high), 19 of which were contested – his highest since Round Seven last year. In the ruck, he had 24 hitouts as he combined with Luke Jackson but knew where his teammates were in the middle, tapping it down to them many times, even collecting five clearances himself.

Getting forward, Gawn kicked one goal and had a couple of misses but he was always in the thick of the action. Around the rest of the ground, especially on the wing, Gawn took plenty of intercept marks to get the ball moving the other way, delivering the ball inside 50 five times too. Eight of his ten marks were contested as he regularly competed well in the air and made the follow-up efforts when intercepting the ball (nine), including running onto a loose ball in the defensive 50 and picking it up with enough time to compose himself and for the Demons to clear the ball from any danger.

Jaeger O’Meara spent all his time in the middle of the ground and was useful in allowing the Hawks to have first possession after a stoppage. He had 15 disposals to the half and ended the game with 27. Always one to pressure his opponents, O’Meara had six tackles and rebounded the defensive end with ease, while his nine clearances helped propel the Hawks forward. O’Meara collected a Ben McEvoy tap to start the fourth quarter and streamed through the middle in a passage that ended up with a Moore goal the bring the Hawks to within a kick.

Jake Lever stepped up immensely in the absence of Steven May, collecting 16 disposals but impacting the game in intercepts where he tallied a game-high 11. He crashed packs and didn’t allow the Hawks forwards much space, as he pounced on the loose ball and found a way to get it out of trouble. Even when the ball was in front of him as he was running back with the flight, he tracked it well and while unlucky with the bounce at times, generally was clean with the pickup.

Tom McDonald has been playing well this season and continued his good form against the Hawks, playing along the wings more than up the middle but still finding plenty of the footy. He had 22 disposals, and started the game well with 14 to halftime. Whilst he had less disposals after that point, he was still impactful, kicking two goals in the third term. He had three goal assists for the game – including a long bomb that found Kysaiah Pickett in amongst a pack in the second quarter – as part of 11 score involvements and his ten marks were an equal-game high.

Ed Langdon had a blinding game off the wing, using pace and finding space on his way to 17 disposals. He drifted forward to kick three goals and was involved in seven scores, keeping up the pressure and rarely turning the ball over. He helped the ball forward and did well to spot up targets as Melbourne used him to perfection in his outside role.

WHAT WAS THE MOST IMPORTANT HEAD-TO-HEAD MATCH-UP?

Clayton Oliver and Jaeger O’Meara locked horns for quite a bit during the game, but at times, they each had different opponents too. The reason this head-to-head matchup matters is because of the determined efforts and grunt they provide in the middle, in getting the best spot or with getting in-and-under for the ball. Each of them had the hitout land in their lap and ran with it through the centre, or found the ball on the outside and went forward that way.

In the clearances, O’Meara beat Oliver with five of the Hawks’ nine clearances coming in the third term. Around the ground though, Oliver had O’Meara beat, the Demons spending a lot of time on the wing and Oliver was prominent when the Dees really needed someone to release the footy from congestion. Without the ball, the two players are constant pressure players, always looking to force a turnover as they’re always in the vicinity and ready to lock on to an opponent with a tackle (8-6 in Oliver’s favour), which was no different today.

WHO SHOULD HAVE STAYED HOME?

Sam Frost, while having 16 touches, wasn’t anywhere near the best, constantly giving away free kicks – six for the game – to the Demons forwards that they rightly converted. Frost had eight intercept possessions and minimal turnovers, generally using the ball well when he could, although he seemed shaky at times. He fought hard against the Demons forwards, but the free kicks against hurt him (and the Hawks) the most. A few free kicks were for holding the man (on Max Gawn and Mitch Brown in the first), chopping the arms (of Luke Jackson in the third and fourth) but in his defence, there was one on Tom McDonald for a push that wasn’t there at all.

WHAT COULD HAVE BEEN DONE DIFFERENTLY?

A lot was changed in-game by Alastair Clarkson’s men when they adjusted to force the Demons to play wide. The Hawks flooded the centre of the ground which forced the Dees to find targets on laterally and sideways. However, it didn’t seem the same setup was used for when the ball was actually in the forward line, with the kick into the hot spot working so well for the Demons.

If one thing were to be adjusted, the Hawks were playing on at every opportunity, looking to get-and-go and catch the Demons out would be it. However,the problem with this is that everyone needs to be on the same page. The balls inside 50 weren’t being read properly – the Hawks had five marks inside 50 to Melbourne’s 17. The marking target, Tim O’Brien, was flying but in a take Hawks fans have heard too many times before, he couldn’t mark enough, or bring the ball to ground for the crumbers. The Melbourne backline seemed easily able to intercept and take the footy the other way, the transition working well for the Demons.

The Hawks weren’t efficient inside 50 for that reason but also because they couldn’t keep up with the Demons defenders. One instance of repeated defensive efforts from the Demons occurred in the third term when Chad Wingard and Trent Rivers had a footrace towards the Hawthorn goals. Wingard paddled it forward but body-on-body contact from Rivers saw Wingard lose his footing. Rivers eventually lost his footing too in trying to slap the ball over the line. The struggle in the goalsquare had Wingard get to his feet again but Michael Hibberd ran hard to the rescue, making up a lot of ground to slide head-first into the ground and knock the ball, back into play to Langdon who got it out of danger. The Demons went end-to-end and a Tom McDonald goal was the end result.

WHERE DOES THIS GAME SIT IN TERMS OF BEST/WORST FOR THE SEASON?

For the Demons, going 5-0 to start the season for the first time since 1994 will have instilled plenty of confidence, and the prospect of more wins to look forward to will entice both them and their fans.

The game itself was an entertaining, back-and-forth affair for a while, looking like it would stay that way, with a close finish on the cards. However, the game will still be remembered for how easily the Demons were able to put the Hawks away towards the end and help their season along.

WHERE TO NEXT FOR THE HAWKS?

The Hawks travel to Tasmania to play Adelaide at UTAS in Launceston, a venue where they do quite well (49-1-14). Against the Crows though, nothing will be easy with the way they’re playing at the moment. The Hawks have the capabilities through the middle of the ground but will need the other areas of the ground to start working better. Their defence, missing James Sicily, might struggle against Taylor Walker and without a true dangerous key forward as Luke Bruest has spent time switching between the midfield and forward lines.

WHERE TO NEXT FOR THE DEMONS?

The Demons go into a tantalising Anzac Day Eve blockbuster against reigning premiers Richmond as a matchup which will certainly have the Demons feeling good about themselves. Melbourne would like to see how they match up against the Tigers, and the exciting, fast-paced brand of footy, reminiscent of the Tigers, might still catch the reigning premiers off guard.

The Melbourne midfield is working well, and this weekend found some leading targets, which is scary for other teams as the Demons have two more tall targets ready to find a way into the team – Ben Brown and Sam Weideman – each excelling in the VFL.

AFTER GREAT FOURTH-QUARTER EFFORTS IN RECENT WEEKS, IS TODAY A CONCERN?

After a couple of fourth-quarter comebacks in recent weeks from the Hawthorn perspective, despite the losses, the effort in today’s final term was a big difference. Scoring 4.3 against Geelong to lose by five points and 4.1 last week against Fremantle to go down by 15, the Hawks should have felt as though this was a game they could have pinched.

The 8-2 goal differential in the Demons’ favour in the fourth isn’t always going to happen and is the mark of a good Demons side, but after being close and remaining close in the past two fixtures, it’s sobering that the Hawks fell away so dramatically in this game.

CAN THE DEMONS DEFENDERS CONTINUE THEIR GOOD FORM GOING FORWARD?

The Demons face Richmond next weekend and the Tigers are a lot more damaging in the forward line than the Hawks are, so they’ll have a tough ask against the likes of Jack Riewoldt and Tom Lynch.

Jake Lever held his own in the backline today with Steven May out of action and some reshuffles of the back six included adding Adam Tomlinson into the mix, with Harrison Petty finding some game time for the first time since 2019.

Lynch and Riewoldt have 27 goals between them, but have the capacity to spread the goals evenly game-by-game meaning it’s not as easy for one defender to switch between the most in-form of the two. It’ll be a good test for the Demons as they look to go forward and prove they can be competitive and be well-kept in the backline against quality opposition, without their best key defender.