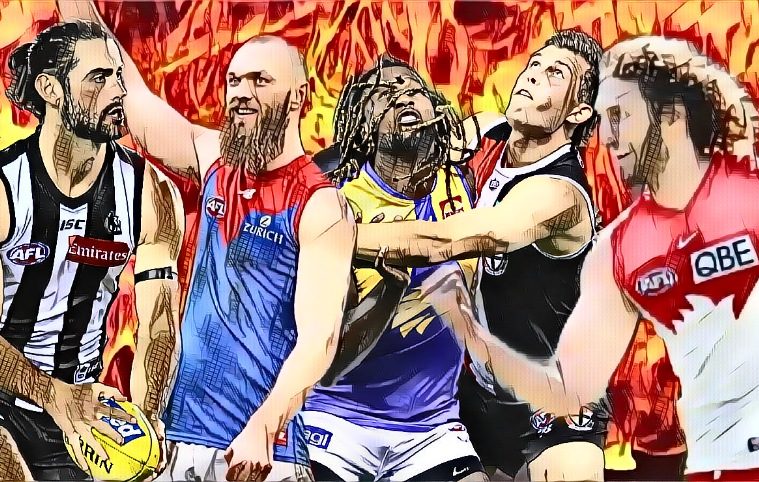 Welcome back to the ruck rankings after the first month of AFL football. I’m going to make this article a little more interesting by handing out a ruckman of the year award based on the performances of the top five ruckman every fortnight. Recapping the leading ruckman of the first two rounds:

RUCKMAN OF THE FORTNIGHT: BRODIE GRUNDY

Max Gawn had a fairly easy fortnight coming up against Flynn and Stanley. He capitalised on Matt Flynn’s lack of experience and tank, kicking two goals and having 29 hitouts on him, and took advantage of Stanley’s aerial vulnerability with 41 hitouts. In this period, he also averaged 22.5 touches, 11.5 contested possessions, 5 intercept possessions, and 11.5 hitouts to advantage.

I predicted it in my previous article and perhaps due to a bit of luck, Reilly O’Brien returned to form in a big way. Witts unfortunately going down with an ACL injury in round three sparked ROB back into form, playing almost half the game against Chris Burgess, with ROB having 19 disposals, 34 hitouts and 13 contested possessions. He then backed this up against a more recognised ruckman in Goldstein, increasing his disposal and contested possession count, and had 30 hitouts with four contested marks and four tackles.

Marc Pittonet was in a bit of strife in my last article, having posted decent hitout numbers but not performing well around the ground. He must have read that segment because he has gone on to have an insane fortnight. Against Sean Darcy and Lloyd Meek, Pittonet had 16 disposals, 11 contested possessions and 27 hitouts. After seeing what ROB did against Burgess in just over half a game, I was genuinely fearful as to what Pittonet would do against Gold Coast a week later, and boy, he did not let me down. Against a combination of Caleb Graham and the aforementioned Burgess, Pittonet only had 10 disposals, but posted a whopping 57 hitouts and doubled the next best ruckman in hitouts to advantage with 20. Surprisingly, Gold Coast won the clearances 47 to 38, but Pittonet was still a dominant force for his side

A bit debatable given he only played the one game but Shane Mumford was a more than handy inclusion for the Giants against a premier ruckman. Credit to Matt Flynn (who was rested against Collingwood) who held his own against Max Gawn the week prior with 23 hitouts and 11 of these to advantage, but it was Mumford who came in and propelled the Giants to their first win of the season. His contested work was amazing with 13 contested possessions, eight clearances, and 6 tackles, which has him leading all ruckman on average in these statistical areas He also had 17 disposals (3rd on average) and 16 hitouts. GWS can definitely get a bit more out of ‘Sausages’ Mumford before he hangs up the boots again.

So, the top five leader board after round four sits at:

Now back to the ruckman rankings:

Quietly putting together another consistent campaign. He had a pretty even battle against Lycett in round three, having only 26 hitouts compared to Lycett’s 24. But he had a great game against St Kilda in round four, exploiting the ruck duo of Marshall who is not quite yet at full fitness, and Jake Carlisle. In this game, NicNat had 36 hitouts, 10 of these to advantage and seven clearances but this wasn’t enough to get the Eagles over the line.

Just keeps getting it done, and has found himself in the top five without posting massive numbers like Grundy and Gawn. He kicked two goals against Nankervis who ranks first among ruckman for intercept possessions, and had a great outing against Peter Wright (albeit a non-recognised ruckman) with 14 disposals, 12 contested possessions, 27 hitouts (nine to advantage) and eight clearances. For the year, he currently sits fifth on average for contested possessions and intercept possessions, equal fourth for goals and third for clearances.

A little stiff to drop this low but those above him arguably put together better performances in the last fortnight. Goldstein has struggled a little given North Melbourne’s form and came up against Stef Martin (who he historically struggles against) and the in-form Reilly O’Brien. In both these games, he had 23 hitouts, averaged 6.5 contested possessions and kicked two goals against ROB. His ability to drift forward and kick goals has somewhat helped North’s goalkicking woes this year, ranking him equal fourth amongst ruckman for goals kicked.

In a similar boat to Goldstein, Lycett has had a difficult fortnight which has seen him drop out of the top eight ruckmen. He held his own against NicNat with 24 hitouts, 9 of these to advantage. Interestingly against Nankervis a week later, both ruckmen worked each other around the ground to collect 42 disposals combined, with Lycett having 20 himself and also losing the ruck battle with only 14 hitouts.

Nankervis moves up a rung following some consistent performances. Against Hickey in round three Nank had 15 disposals, 10 contested possessions and 16 hitouts, whilst against Lycett he won the ball at will with 22 disposals and had nine intercept possessions to place him equal first among ruckman (tied with Max Gawn) for this statistic.

Perhaps it was my Hawthorn bias but I was little bit too optimistic for these two in the opening rounds. But they are still combining well to cause headaches for opposition ruckmen. Against the Cats they completely reduced the effectiveness of Rhys Stanley, with the Hawthorn big men combining for 36 hitouts while Stanley himself only had eight. But they were soundly beaten by Sean Darcy a week later, allowing Darcy to have three goals and 10 hitouts to advantage from 18 hitouts, while McEvoy and Ceglar combined for just 33 hitouts and 14 hitouts to advantage.

Fremantle are doing a fantastic job of incorporating Sean Darcy back into their side whilst also continually giving Meek ample game time, although it appears Meek may slip out of the side relatively soon when Rory Lobb returns. Against Pittonet in round three they combined for 23 disposals, 35 hitouts and 19 contested possessions, and against the previously mentioned Hawks duo, Darcy did the bulk of the ruck work, doubling Meek in disposals (14-7), contested possessions (10-5), hitouts (18-9), whilst also having 10 hitouts to advantage and three goals to himself. I fully expect these two, or Darcy alone, to make a further rise up the rankings in the coming weeks.

The ruck roulette at the Saints continues with rookie Paul Hunter being replaced by a defender, returning ruckman and a delisted forward, but they’ve done surprisingly well given the lack of a fit and genuine ruck option. In round three, Carlisle and McKernan combined for 25 disposals, 29 hitouts and 18 contested possessions and they utilised their traits on the opposing ends of the ground to stay in the contest. This combination was switched to the Marshall and Carlisle a week later, and they held their own against NicNat, posting a combined 24 disposals, 30 hitouts and 10 hitouts to advantage. Expect Marshall to take full responsibility of the ruck in the coming weeks as he regains full fitness.

Fullarton’s game against Grundy cannot be treated as an outlier as it would be similar to disregard Pittonet’s 57 hitouts against a non-recognised ruck. Fullarton himself had 17 disposals against Grundy and used his athletic background to hold his own around the ground. McInerney returned a week later and played a great game against Stef Martin. The Big O had 29 hitouts (10 to advantage), eight clearances, 14 disposals and 12 contested possessions as the master and apprentice went at it in a pretty even contest.

Stef rises up the rankings by a couple of rankings due to his performance against Oscar McInerney. Perhaps it was the familiarity of playing his former side, but this performance was vintage Stef, posting 13 disposals, nine contested possessions, and a remarkable 30 hitouts. However, he did struggle against Goldstein the week prior having only nine hitouts and 10 disposals. He currently sits 15th in the league for average hitouts, so it will be interesting to see if his performance against the Lions was just an outlier in a somewhat average season for Stef so far.

Has done surprisingly well in the main ruck role given his lack of experience in that position. He has used his athletic ability with great success, winning 19 hitouts against the aforementioned duo of Carlisle and McKernan, and backed this up with 23 hitouts against a genuine ruckman in Tom Hickey, but only had four hitouts to advantage. Collecting an average of 11 disposals in this period, Wright is proving to be a very handy back up ruckman while the Bombers pick up a bit of form.

Stanley is in some kind of form slump at the moment, but also had a tricky fortnight, coming up against McEvoy/Ceglar and Gawn a week later. In this period, he has averaged 12.5 disposals, nine contested possessions, and nine hitouts, and has also dropped in clearances, score involvements and hitouts to advantage. It will be interesting to see who the Cats turn to to fix up this issue, whether it be taking out Blicavs from defence or giving Darcy Fort a run.

It was incredibly sad to see Witts go down with an ACL considering how much I had been hyping him up in my previous articles. Given that Gold Coast have no other fit recognised ruckman at the moment, they have turned to athletic forward Burgess and defender Graham to handle the load. Against Pittonet they posted a lowly 14 disposals, 11 contested possessions, 16 hitouts, and five hitouts to advantage combined. Until Zac Smith becomes available in the next month or so, continue to see this duo occupy the bottom of the rankings for the foreseeable future.