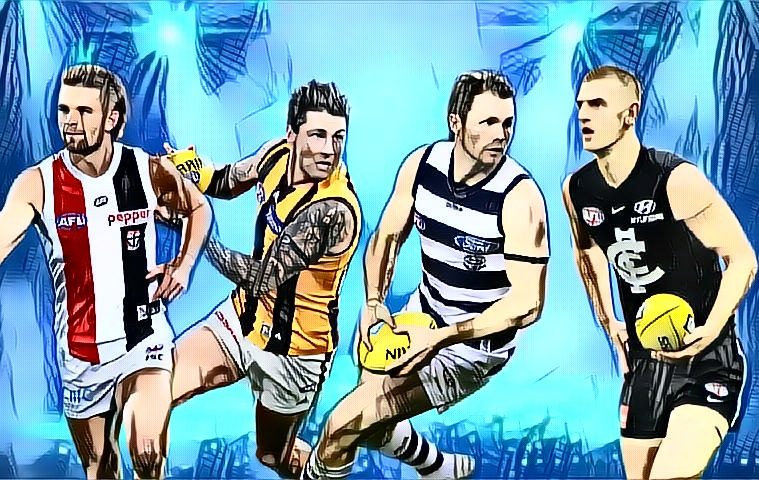 In The Spotlight – Round Five

The players from week four certainly had a mixed bag of results. Some shined, others did little with the opportunity provided, one did not even get an opportunity. Let’s take a look at how my selections fared last week, with a few key stats and their game summed up in a sentence.

JAKE STRINGER:
10 disposals, five tackles, three marks, 3.1
Got the Bombers off and running with two first-quarter goals, however, only one centre clearance from 21 stoppages is a concern

TOM FULLARTON
Seven Disposals, 1.0, two marks, two Hitouts
Barely sighted for the game and provided nothing up forward, would be lucky to not be dropped

SAM COLLINS
Seven disposals (six intercept possessions), one mark
Kept Harry McKay to one possession for first half, weight of numbers wore out in the end but gave 110% as always

JOSH KELLY
20 disposals (77%), three tackles, 2.0, seven score involvements
Not as much of the ball as his midfield counterparts, however provided clean ball use on the outside.

TARRYN THOMAS
12 disposals, six marks, five tackles, 2.0
Managed to get great return on the scoreboard, just needs to keep refining his disposal, had four turnovers on his ten remaining touches

MICHAEL FREDRICK
10 Disposals, three marks, 1.0
Kept on the move however impact was limited, looks to have found a new role up forward

DAN BUTLER: The former Tiger hit some form last week and looked back to his old self. 16 disposals and 3.2 in a win over the Eagles. It will be an exciting matchup as Richmond are generally more equipped to deal with the smaller forwards.

The last time these two teams played in the H&A season, he booted 3.2 in a 24 point win manned up on Liam Baker. That matchup may occur again, however, maybe look for Jayden Short to perhaps be the stopper

MASON COX: The big American is no stranger to the spotlight, having the eyes of his home country following him as he climbs to the heights in The Land Down Under. For Collingwood to have any chance in this game, Cox must make the Eagles backmen accountable. Despite being a very inconsistent player, Cox still has physical attributes that, on any given day, can make him a potential match-winner.

He will make life difficult for the Eagles who are at their best zoning off or flying a third man up. If he can, at the very least force a contest and a ground ball, that brings into play the Magpies dangerous small forwards, led by their talisman Jordan De Goey

TOUK MILLER:
To be honest, I’m not expecting this contest to be close. Combining the Suns’ injuries with the firepower of the Bulldogs, I believe this game could get ugly, and fast. However, the Suns have not only one of the most underrated two-way midfielders but one of the most inspirational leaders in the AFL despite not being a captain yet.

Miller has been simply outstanding for the Suns and I’m very interested to see who he takes on in the midfield. Even if the Doggies get 10 goals up, you can guarantee whoever has Miller, will not feel like they are winning the game. When they played last year, in a five-point Bulldogs win Miller went to Bontempelli and kept Bont to 20 touches as 35% efficiency. Maybe this matchup happens again this week.

JORDAN DAWSON: One of the unsung heroes for the Swans resurgent backline in 2021. Averaging 23 touches a game, he is an integral piece. I feel he could be the perfect matchup for Greene as he is five inches taller and the same weight so he should be able to handle the star forward on the ground and also if he takes to the air.

GWS have been spacing things pretty well so there may not be much chance to get help over the top, unless midfield pressure is sustained.

NIK COX: The 19-year-old midfielder took the AFL world by storm last week vs Sydney. He looked composed and absolutely willing to take the game on. He moves in a way that just shouldn’t happen for a kid his size.

However, he can, so watch out.

He pushed forward and almost stole the match in the fourth quarter. I loved the way this kid moved, and I was actually hoping my Suns would take him. The Essendon situation couldn’t have worked out any better for him. A mouth-watering matchup with Hugh McCluggage could beckon.

LIAM JONES: I believe he has the Dixon matchup due to body strength here, I’m not sure Weitering can physically match the Bearded Behemoth. Jones has been outstanding in one-on-one matchups this season, but has yet to take on a “Power Forward”.

Dixon looked a touch out of form last week with his hands, so Jones may have a few opportunities if Dixon has the yips early, however, look for Port to target him early and often, especially with the injuries to Duursma, Butters, and Rozee perhaps not 100%

LACHIE SHOLL: The second-year crow was simply sensational last week. Gaining a Rising Star nomination with 31 touches and nearly 600m gained, the youngster was a force. A matchup with fellow youngster Adam Cerra out wide would be fascinating.

The football world outside of WA likely has been keeping tabs on the Victorian purely due to reports of clubs wanting to lure him back, the Docker however is putting together a great season himself, and improving rapidly.

CHAD WINGARD: Had a very solid all-around game vs Fremantle last week, with 26 disposals, seven marks five tackles and 1.1. He must keep presenting and forcing the Demons’ defence to be accountable.

Melbourne also like to play a spare back so he must improve on his efficiency so it will make the decision to allow a spare player upfield that much harder for Simon Goodwin.

PATRICK DANGERFIELD: The Cats welcome back Paddy after his three-week suspension and you can guarantee Geelong will come out firing. The Roos will want to close up the Geelong game with tough, physical pressure.

I would expect the heat to come for Danger early, maybe not a straight-up tag but, definitely contact around stoppages. Maybe look for the Ziebell experiment off half back to stop, and he instead goes to the Cats superstar.