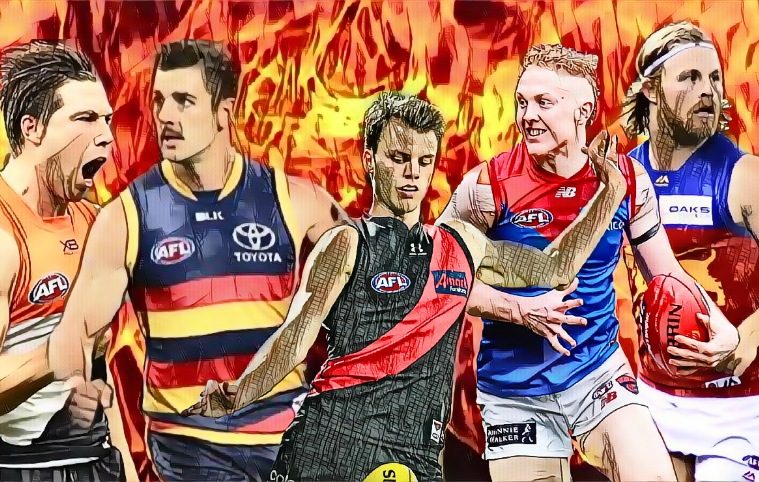 Another week, another edition of the Mongrel’s rolling All-Australian team. Four weeks in, and this team is starting to take shape. Enough talk, let’s just get straight into it.

Our team from Round 3 went as follows:

HALF BACK FLANK: DANIEL RICH (BRISBANE)

Is there a better user of the ball by foot than Daniel Rich? Brisbane’s rebounding half-back has been on a tear, and his last two weeks have been especially brilliant. Never afraid to go for the risky option by foot, Rich is ultra-consistent, and is averaging career-best numbers in disposals kicks, marks, and defensive rebounds. All this, and Rich is entering the twilight of his career. He seems to still have many years left in the tank.

Toby Greene’s last two weeks have been simply phenomenal. The stats themselves make for amazing reading, as Greene’s last two games have been almost identical. In both games, Greene kicked 5 goals and registered four marks and eight score involvements. He had 18 disposals against Collingwood, to go with 17 against Melbourne. Four tackles in round 4, three in round 3. With Stephen Coniglio out with injury, Greene is the Giants’ stand in captain, and with performances like these, he will be an inspiration for his younger teammates.

Like the two men just mentioned, Jack Steele’s last two weeks could not have been better. 68 disposals, 31 contested possessions, 12 clearances, 14 score involvements, all in two weeks. While his game against Essendon didn’t lift his team over the line, Steele’s performance against West Coast was perfect, and he was arguably best on ground as the Saints made their comeback.

Port Adelaide’s contested possession king, former skipper Ollie Wines is well and truly back to his best. Averaging 30 disposals across the first four games, Wines is second in the competition for contested possessions, behind only Clayton Oliver. In round 2, we noted that Wines only had a disposal efficiency of 55%, and in the last two weeks, he has gone at 77%, and the difference has been noticeable in Port’s ball movement.

With Brodie Grundy being dropped from the line-up (we’ll get to that), the door was left wide open, and Max Gawn stepped through to reclaim his place at the head of the ruckmen’s table. The team went largely unchanged this week, and this is the only positional shift that was needed.

Even though I watched the Collingwood vs. Brisbane match, perhaps I was seduced by the stats. Maybe I imagined that Grundy had a better game than he actually did. Grundy is supposed to be an extra midfielder for Nathan Buckley, but against Shane Mumford and the Giants, Grundy was outworked and outclassed by a man that has already retired and made a comeback. This is a man that is playing on a seven year, seven million dollar contract, and this sort of money buys influence, and that’s not what Grundy is currently providing.

Cards on the table. I’m a massive fan of Errol Gulden. He has a Zak Butters quality that is infectious, and I have jumped on the Gulden bandwagon, much like I did with Butters. It is much sadness that I must say, that unfortunately, Gulden just couldn’t hold his place with the approaching Toby Greene tsunami. But that’s OK. Let’s all remember that this is first year player that has had a remarkable first four games for his age. Gulden will be back in this team in no time. Whether it’s this year, or in the future, we have a star on our hands, and he will provide us all with plenty of highlights in the next decade and beyond.

Port Adelaide’s Dan Houston has also lost his place, but this is more due to Ken Hinkley. Houston was used higher up the ground against Richmond, and while Houston was very good, I needed to judge his effort as a wingman, as well as a half back. Houston took a couple of game saving marks late in the game, but for a pure half back performance, I couldn’t go past Daniel Rich’s rich vein of form, and Houston is the unfortunate player that has to make way.

He has started his career brilliantly, but in the last few weeks, Bailey Smith has started to be overshadowed by the Western Bulldogs army of midfielders. On Saturday, this was felt the most, a Smith struggled to get himself into the game, and only touched the ball 15 times. Like Gulden, Smith’s career has only just begun, and he will find his way back into this team in due course.

You know how this works by now. Here’s the Round 4 team:

Before their respective injuries, there were two players who were consistently banging the door down, West Coast’s Shannon Hurn, and Collingwood’s Taylor Adams. In his three games, Hurn averaged 21 disposals, at an astounding 96% efficiency. Adams too had an excellent first three games, averaging 25 disposals, including an average of 12 contested possessions. However, both suffered injuries in round 4, Hurn to be sidelined for a few weeks, while Adams will need surgery, and will be on the sidelines for up to 12 weeks.

For the other players, let’s run through them. Melbourne highlight reel Kysaiah Pickett just continues to provide us with “Kodak moments”, Sydney ruckman Tom Hickey has been the unlikely dominant force the Swans have craved in the middle of the ground, and Brownlow Medallist Tom Mitchell is his usual ball winning self, gathering 17 possessions in the second quarter alone against the Dockers.

Tom Mitchell’s teammate Jaeger O’Meara has supported Mitchell exceptionally and is averaging career best numbers in disposals, contested possessions and clearances. Richmond’s Jayden Short has backed up his best and fairest 2020 with an outstanding start to 2021, across the back half and wing for the Tigers, Gold Coast’s young gun Noah Anderson is thriving without best mate Matt Rowell by his side, and has fully stepped out of the Rowell shadow, averaging 28 disposals. Finally, Giant Tim Taranto is again his side’s best midfielder, averaging a career high 29 disposals and six tackles.

WHO’S TEETERING ON THE EDGE?

Josh Bruce, you need to start backing up your good games. I’ve decided to leave Bruce in the team this week, despite only kicking one goal against Brisbane. But to ever be taken seriously as a forward line threat, Bruce needs to start hitting the scoreboard against teams that aren’t North Melbourne. Last season, six of Bruce’s 14 goals came against the Roos. This year, it’s 10 out of his 15. That is simply not good enough for a key forward, and if Bruce doesn’t step up, he’ll be out of this team quick as a flash.

Some would argue that Steven May’s injury should’ve seen the Demon defender on the sidelines of our team. However, May’s first four weeks, up until the horrific eye injury have been excellent. It is likely that another key defender will overtake May in the weeks that May is missing from Melbourne’s backline, but until that happens, I’m not going to dump May because of an injury.

Tim Kelly is the final player teetering on the brink. Despite gathering the ball 23 times against the Saints, Kelly was largely ineffective, being tagged out of the game. Kelly has been West Coast’s most damaging midfielder across the first four rounds, but Kelly will need to learn how to shake the tag, because without Shuey and Yeo, Kelly is by far West Coast’s most important midfielder.

And that is that. It’s been a wonderful start to the 2021 season, and more and more names are starting to feature in our team of superstars. I’m sure there’s going to be some players that fans will say I’ve overlooked, and that’s great. Truly, it’s very good that so many players are putting together seasons of substance, and that can only be a great thing for our game.