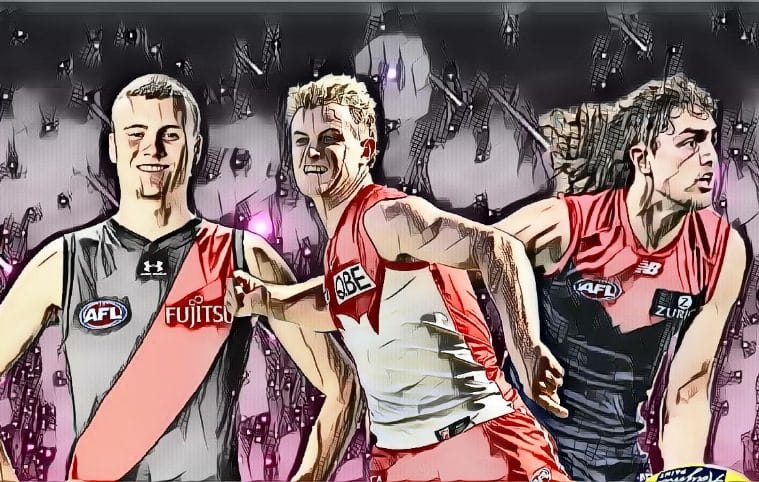 So here at The Mongrel, we’ve taken it upon ourselves to rectify another good AFL idea not quite reaching its potential, this time the Ron Evans Medal for the rising star. We’ve decided to rename it the creative ‘Mongrel Rising Star’, but will keep the same eligibility criteria as the official award, players cannot have played more than 10 senior matches or turned 21 before the start of the 2021 season. We’re we are adding our very unique magic mongrel secret herbs and spices formula is to the voting system, which presently involves seven assorted media dinosaurs desperately trying to remember the name of the top five most popular kids that Sportsbet have installed as favourite. Our system will see a 5,4,3,2,1 vote system applied each round and cumulative scoring with the winner crowned by finishing with the most points.

For all of the talk about Sydney academies, Warner who was selected out of East Fremantle with pick 39 looks a ready-made star. With dashing blonde hair and poise beyond his years, he starred against the Tigers, collecting a ground ball and snapping truly from 40 metres, before a stunning piece of play that saw him collect a centre clearance, break tackles and kick a goal on the run that wouldn’t look out of place amongst the goal of the year winners over the last 20 years.

His form over the first three rounds could have seen him poll votes in each game, but he has rightly earned the five votes this week for a superb outing against the two-time reigning premiers in which he collected twenty disposals, five tackles, eight score involvements and the aforementioned two spectacular goals.  Noteworthy also that Sydney have received all three Rising Star nominations this season thus far, the first time that has occurred, and also the first time one club has provide the winner in three successive weeks.

Probably the majority of footy fans stroked their metaphorical beards in bemusement at Jackson’s name being read out at selection 3 in the 2020 draft, surprised the Demons didn’t plumb for one of the more guaranteed midfield gems in the pool. The Melbourne hierarchy however not particularly well renowned for making good decisions can sit back proudly with getting this one seemingly right, the other key benefactor is the behemoth captain of the Club, Max Gawn.

Jackson’s fast-tracking last season enabled him to spend time in the ruck this game, freeing up the skipper to swing forward and kick two important goals. Jackson himself added another to the total, and also picked up 15 possessions, 10 hit outs and impressively two tackles inside forward fifty, keeping the Giants defence under pressure at all times.

The lightweight Essendon utility has improved each match in his debut season after being drafted at pick 8 last year, improving his output from nine disposals, to 13 and this round 17 in the evisceration of a hapless St Kilda. What would have long-suffering bomber fans salivating however is Cox’s all-round game that two clearances, three tackles, three one percenters and nine score involvements.

Pleasingly, he also used the ball at 88% disposal efficiency and hit the scoreboard again for the second successive week.

The earliest pick of the young cygnet brigade in the last couple of years must be looking on with bemusement as all of his fellow rookies receive official Rising Star nominations, however, I’m sure the coaching panel are quietly pleased with his progress thus far which has resulted in 11 scoring shots for seven goals in his first three matches.

This game lining up against a stingy triumvirate of tall Tiger defenders, McDonald was less overawed and more seasoned as he followed exceptional leading patterns and was rewarded with sublime delivery from further afield. Only eight disposals, but made them count with seven score involvements, two intercepts, and two marks inside the Swans forward fifty that resulted in goals.

The livewire Fremantle speedster was one of coach Justin Longmuir’s few bright lights on an otherwise forgettable afternoon. Four marks inside 50 defied the strong intercepting Carlton defence, and if not for poor conversion, Frederick registered one goal four behinds, could have pushed himself up higher on this list.

As it was, he contributed seven score involvements from 14 punchy touches and is bringing a real sense of urgency to a misfiring Freo attack, will be keen to see his impact once they regain some key position players.

Trent Rivers, unluckily finds himself just out of the votes again, the fact he already plays like a seasoned veteran counting against him. Another super game though, 16 disposals at 100% efficiency which will give Simon Goodwin a warm fuzzy feeling, three intercepts and two contested marks showing his prowess when the ball is ion dispute.

Errol Gulden, the undisputed star of the first two rounds was again very good, but just shaded this week by several peers. 18 disposals, nine marks, six score involvements and two tackles inside forward fifty though show he is willing to do the hard stuff as well as the flashy things that have captured the public’s imagination so far.

Lachlan Sholl, the diminutive Crow was super important again in their come from behind win over the Suns. Showing his capacity to work up and down the ground with two rebounds from D50, as well as three entries in F50, along with five score involvements, four intercepts and nine marks, a nice metric for an outlet runner.

As we are now three weeks into the season and this new award, we’ve realised that while we still believe this methodology is far superior to the AFL’s half-arsed version, there are still limitations. Is the limit of under 21 too restrictive? What about the game limit of no more than ten games prior to the season in which a player may be nominated? From the weekend, if we’d loosened the reigns just a touch, both Sam Wicks and Changkuoth Jiath would have featured heavily, along with several others from the first few games. This is where the AFL media and the Mongrel differ, we are not above taking feedback and self-reflecting. Anyway, round 3 saw the first of the vaunted Bomber newcomers gain a vote, which will warm even the blackest (and red sashed) heart, meanwhile the Baby Swanners TM continue to run roughshod over the other rookies and the Dees nice looking mix of A-graders and emerging young stars keep their team flying high.