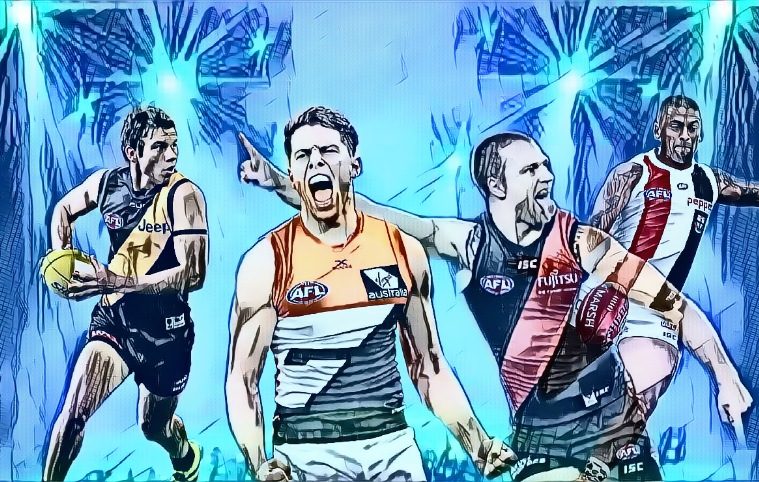 In The Spotlight – Round Four

Welcome to this week’s edition of “In The Spotlight”.

Before I delve into this week of action, let’s take a very quick look at the picks from the last round. I’ll show you the numbers and give my take on the players’ games. I’m a firm believer that a few words can give an idea of the impact, particularly in the sporting world. Given that, I’ll sum up the game in a single sentence.

Back to his imposing self, lifted the midfield.

Got a bit of the ball from half back, not as much forward run as previous few games.

Career-high score, though half of his total stats came in the first quarter.

Steady with the ball in hand, shaky when the third man couldn’t impact the contest.

Formed a devastating tandem with Kelly, feasted on the Naitanui dominance

Dominant return to form for the Blues captain, Fremantle had no answer

Mirrored output of Oliver despite direct match-up not happening, Five frees against was concerning.

Looked at home in this game, took opportunity provided in starting 22

* Players selected before teams are announced

JAKE STRINGER: “The Package” returned with a bang against St Kilda last weekend, hitting the scoreboard with four goals straight. With the likely season-ending injury to Dylan Shiel, look for Stringer to be used in the midfield more to combat the bigger body duo of Luke Parker and Josh Kennedy. His acceleration and strength in the contest will be absolutely crucial, especially given the Bombers ruck depth taking a blow.

He will also be used forward but as the Swans bat deeper in the midfield, the Bombers will need to pick and choose the crucial times to release him into the middle as he builds back his fitness.

DANIEL RIOLI: In a normal world there is no way a player with the talent of Rioli should be outside the best 22 of a very good team. The problem is that it appears he is almost coasting to begin 2021. Almost mirroring the form of his side where he is happy to rest on what has been previously achieved, as opposed to living in the here and now.

Simply put, Rioli needs to lift. As the Medical Sub last week he was activated early once the Tigers lost Dion Prestia only eight minutes into the contest. People will be quick to dismiss this selection, pointing to his impact of two goals. Those numbers however don’t tell the full story, as Rioli kicked both goals in the last quarter with the margin blowing out to over 40 points. In the three quarters prior he amassed only seven touches.

TOM FULLARTON: To say the Lions were dominated in the hitout column would be the understatement of the year. In one of the most lopsided stats in history, Collingwood’s superstar ruck Brodie Grundy amassed a staggering 54 hitouts to just three from Tom Fullarton. To say this week is easier would be incorrect.

The young Lion goes from battling one of the top three rucks in the AFL to taking on the best tandem in Tim English and Stefan Martin of the Bulldogs. He is a good matchup choice for the athletic English yet may struggle with the stronger Martin. Help may be on the horizon with the return of Oscar McInerney from an ankle injury, and I believe this saves him from the axe this week.

No matter the form, taking on an elite tandem with a single returning ruckman is a bad idea. Fullarton was unable to impose himself aerially, taking two marks for the contest last week. The pleasing sign was that he held his own at ground level, amassing 17 disposals and five centre clearances, helping his midfield nearly break-even in that department despite getting secondary possession off the ruck taps. The ruck duel is likely where this game will be won and lost and Fullarton will be counted on by the Lions to battle the twin towers of the surging Bulldogs.

BRAD HILL: It’s fair to say the Saints have not gotten their money’s worth with the acquisition of the three-time premiership wingman. The massive form slump has been very well documented and if he avoids the axe he now comes up against one of (if not the hardest) working wingmen, in Andrew Gaff. He may play on the opposite wing and end up with the physical Liam Duggan, however, I’m not sure the Eagles permit that match-up to occur.

Hypothetically, if I’m Brett Ratten, I need to know how badly Hill wants to be a contributor and give him the match-up with the best in the business. His form slump mirrors the output vs expectations for 2021- DISAPPOINTING

Yes he had 16 touches at 100% efficiency but his run simply was not there, and his lack of defensive running, in particular, has been documented throughout the weeks.

SAM COLLINS: The reigning Suns best and fairest had a very down day against the best key forward (so far) of 2021 in “The Big Texan”.

This week he has the very important job of marshaling the Suns defence as they prepare to host Carlton. He will likely take Levi Casboult, however, I believe his primary objective will be to take the body of Harry McKay at every opportunity and to assist Charlie Ballard with the rapidly improving forward. The strength and hands of Casboult also present their own problem, and he is able to win games off his own boot against even the most seasoned defender.

As much as McKay likely presents the biggest danger, Collins may not have the mobility to curtail him at ground level, which is why Ballard likely gets the first crack. With the Suns devastated by injuries to their ruck depth, their defenders will need to be prepared to defend high-quality entries.

JOSH KELLY: So the question was asked through the week – “Is Josh Kelly more than an average player?”

Well… with the Giants’ engine room decimated by fresh injuries to Matt De Boer and captain Steven Coniglio, Kelly has to step up more than ever. I love watching Kelly in full flight, but we haven’t seen him at his best for some time. Perhaps injuries have played a part, or maybe he is getting buried amongst the Giants’ ever-growing stable of midfielders.

If GWS are to get into the finals and save Leon Cameron, Kelly needs to get back to his best in a hurry. Still very deadly with ball in hand, he is averaging 23 touches and nearly 450m gained so far (which both are classed as “elite”). He should see some more time in the middle as opposed to spending time on the wing or half-forward. He may be matched up with Tyler Brown on the outside so there may be an opportunity to test the young Magpie, as the endurance of Kelly is amongst the best in the league

TARRYN THOMAS: The second-year midfielder has been steadily improving in 2021. He is accumulating the football at an improved rate, however, that might not be a good thing…

As it stands, Thomas sports an ungodly 44% disposal efficiency by foot (61% overall). He will continue to get his opportunities, however, he needs to make use of them. If he cannot, he may not longer be considered a midfield option and will have to make do as a flanker.

He is such a smooth mover and his IQ is very impressive for a player his age in a struggling side. Part of the problem is that the forward line can be classed as “mediocre”. If players like Cam Zurhaar and Nick Larkey aren’t forced so high up the ground to get a touch, then I would expect those disposal percentages to climb. With the return of Ben Cunnington to the middle, there may be a bit more open space for him. Also, the Crows like to run and gun which may afford Thomas space as the ball pings around. I’m not expecting the Roos to come close to Adelaide, however, this could be an opportunity for Tarryn to showcase his outstanding potential.

JACK VINEY: There is one thing I believe will win this contest, and Viney holds the key. When in the middle HE MUST free up whichever midfielder Mark O’Connor is with. You already know what the tough-as-nails Demon brings to the table, but what may go unnoticed is that often his attack on the contest is seldom for his benefit.

O’Connor has been the premier run with player so far in 2021 and if he finds his way to Petracca (when he is in the middle) I would throw in Viney in to disrupt the plans of Chris Scott.

Viney can also be an option to frustrate Cameron Guthrie in the middle – he will take away the space that Cam thrives so much on. Fresh off a match-winning performance against Hawthorn with 43 touches and ten clearances, he simply must be stopped. With James Harmes out injured, this becomes a tougher (but not impossible) assignment. It’s a guarantee that Viney will be going at his task with 110% focus no matter what he is tasked with.

MICHAEL FREDRICK: Trialled as a half back/wingman for a few games, young Docker Fredrick looked to be skillful but lacked awareness. Thrown forward last week, he was dangerous albeit wasteful, with eight marks but registered just 1.4.

Potentially, the Dockers forward line can cause headaches, however, Frederick’s game often mirrored the Dockers’ story of 2020 in crucial times where they had opportunities but could not seize them. He may end up working up the ground, however, his primary role may be to curtail the Hawthorn rebounding defenders.

Between them last round, Jack Scrimshaw, Changkouth Jiath and Jarman Impey combined for 69 possessions and all went at over 75% efficiency. His physical measurements compare very closely with Jiath so perhaps he is assigned a defensive role to mitigate his disposal efficiency. Jiath’s one weakness is his disposal – if Frederick can force him into rushed kicks, Freo may well benefit greatly. However, if those three Hawks get that much clean ball, there is no way the Dockers come out of this contest with the victory.