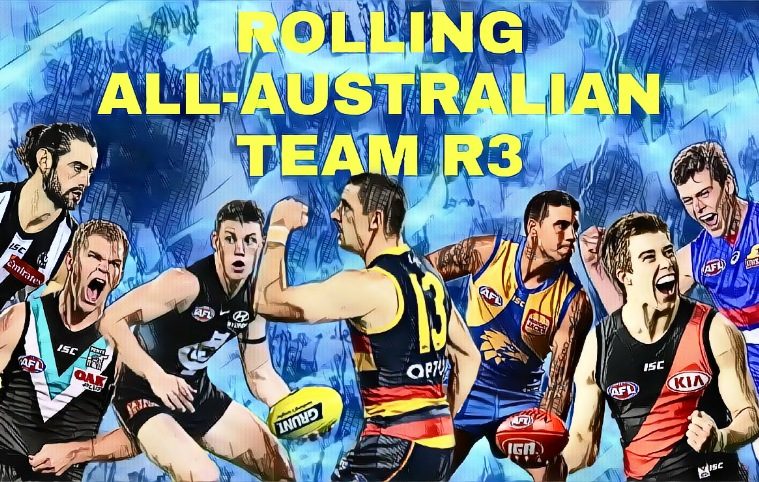 How good is footy! Sydney are back to their best, seemingly out of nowhere, Essendon got their season rolling at the expense of the Saints, and the Western Bulldogs beat North Melbourne with the biggest margin in club history. Josh Bruce even kicked ten goals! Who would’ve predicted that would happen heading into the Easter weekend?

Anyway, the long weekend is over, we’ve all consumed enough chocolate to last a lifetime, and our rolling All Australian team is back in action. How many players have we changed this week? Here is the Round Three Mongrel All Australian Team.

For a quick catch up, last week our team was as follows:

I don’t think it’s an understatement to say that this kid can seriously play! Changkuoth Jiath’s story is one for the ages. Born in a refugee camp in Ethiopia, Jiath moved to Australia at six years old. In year 12, he was granted scholarship and boarded at Xavier College, joining Hawthorn’s next generation academy in the process. Since becoming a regular in Hawthorn’s back six, Jiath has thrived, especially in James Sicily’s absence, and is averaging 23 disposals and seven marks to begin 2021.

A true wingman takes the outside midfield spot this week after performing consistently all year, and after his brilliant display against the Giants, he couldn’t be overlooked. Averaging 24 disposals, Langdon also averages 526 metres gained, and has a disposal efficiency of 77%. With Melbourne still undefeated in season 2021, Langdon gives the Demons plenty of outside run and carry, and is vital to their finals aspirations this year and beyond.

Sitting third in the Coleman Medal, Harry McKay has finally come of age and looks more than ready to tear the competition apart. Kicking 7 goals from 13 shots against a hapless and undermanned Fremantle defence, McKay is perhaps the best young key forward in the game. Across the first three games of the year, McKay averages 12 disposals, seven marks (including six marks inside 50), and nine score involvements.

Picking up where he left off in 2020, Christian Petracca has put together three brilliant efforts, and simply couldn’t be overlooked again. In 2020, Petracca averaged 24 disposals and kicked three goals. This year, Petracca has increased his output to 28 disposals and six marks, while also hitting the scoreboard three times. Like incoming teammate Ed Langdon, Petracca is one of Melbourne’s most important players in their charge towards much-needed finals glory.

Whenever a player kicks 10 goals in a game, he simply cannot be ignored in a “team of the week/All Australian team”. In the three games to start 2021, Josh Bruce has equalled his goal kicking tally from the entirety of 2020. However, with no disrespect meant to his opponent, kicking goals against this North Melbourne defence is easier than Bruce will find it at any other point of the year. Now is the time to back up this effort.

Let’s not mince words. In the last two weeks, Brodie Grundy has returned to his absolute best. Grundy has recorded 144 hitouts, 46 more than the next best, and 49 hitouts to advantage, also the best in the league. Grundy also averages 19 disposals (11 contested), five tackles, four marks, and five score involvements. The main concern with Grundy’s form in 2020 was his lack of impact on the contest, and this year, he has more than turned that around.

Be honest. We all thought Josh Dunkley would be the player to suffer the most when Adam Treloar made the switch from Collingwood to the Bulldogs. Instead, the opposite has happened. Shrewd moves at the trade table got Stefan Martin in the door, and that has freed Dunkley of the burden of being the club’s second ruck option. With this weight lifted, Dunkley has thrived, and has posted career-best numbers across the board, improving every major statistic except one (inside 50s).

Ultra-consistent to the point of astonishment, Zach Merrett has once again dominated Essendon’s midfield. Averaging 31 disposals, Merrett has played more on the outside this season, and is averaging the most inside 50’s of his career. Arguably best on ground against the Saints, Merrett is one of the frontrunners, along with Andrew McGrath to be the next Essendon captain, and will be an excellent choice if selected.

Max Gawn is the first unlucky casualty of someone else’s red hot form, as Brodie Grundy simply had to be our number one ruckman this week. Gawn’s form has been excellent, and is a big reason why Melbourne has started 2021 undefeated, but Grundy has been on another level in the last two weeks, and therefore Gawn must drop to the bench.

Tim Kelly is in an almost identical situation. While his form has been very good if not excellent, Josh Dunkley is in almost career-best form. Kelly had 28 touches against the Power, and was a driving force at stoppages and around the ground, but he wasn’t his team’s best, and this week has to settle for a spot on the pine.

Only one defender loses his place this week, as Blake Hardwick couldn’t replicate his Round Two effort against the Cats. Hawks fans needn’t worry though, as Changkuoth Jiath has stepped up. Jiath stepping up meant that Hardwick had less of an impact on the game, and has fallen out of favour as a result.

As our defence remains basically rock solid, our next point of difference is in the midfield. After his team couldn’t get the job done, Andrew Brayshaw loses his wing spot to Ed Langdon. Brayshaw tried to be overly physical against the Blues, and his input suffered as a result. Marcus Bontempelli also loses his spot, despite the Bulldogs handing North Melbourne a 128-point beating. Every midfielder wearing red, white and blue was on top of their game, and as a result, the Bont didn’t need to do as much. The fall back of this is that other midfielders in the competition have been more consistently brilliant than the Bulldogs skipper, meaning Bontempelli’s stay in our team only lasted the solitary week. Jack Crisp was also unable to back up his effort in Round Two, and despite averaging 27 disposals in his three games, more weight was put into the two games he played well, without necessarily dominating.

Forward of the ball, and Jack Riewoldt couldn’t keep Harry McKay out of the forward line. With Richmond suffering a 45-point defeat at the hands of the surprising Swans, Riewoldt only kicked the solitary goal, and has dropped to sixth on the Coleman Medal race. Tom McDonald followed up his two first rounds of excellence with a poor performance on Sunday. Only gathering eight possessions, McDonald produced some terrible efforts when the ball was in his area, and he failed to hit the scoreboard, despite the Demons recording 67 inside 50s. Orazio Fantasia was again quiet for the Power, highlighting the inconsistency that has plagued him his whole career. Yes, he kicked two goals, and his tally for the season is the 11th best in the competition, but Fantasia’s impact on the game in rounds two and three weren’t as lasting as round one, and there are others that have been more consistent.

Finally, this is maybe the most difficult paragraph I’ll ever have to write. But Zak Butters, I tried so hard, and got so far. But in the end, it didn’t even matter. Butters couldn’t back up his 36 disposal effort in Round Two against the Eagles this weekend. Always appearing to run where the ball wasn’t, Butters tried to use his physicality to get into the game, but it only served to cost him free kicks. As much as I wanted to keep him in the line-up, I once again had to be impartial, and I couldn’t justify his position when so many others have had more consistent starts to the season.

So once again, for those looking for the simplified version of the team, here it is.

Not including the players that dropped out of this week’s team, I have listed 12 individuals that are screaming at the selectors, begging to be included in the team.

Jake Lever has been rock solid in defence for the Demons, and his combination with Steven May has been brilliant. Tom Barrass has also held together West Coast’s back six and has taken the most marks (an average of 10 per match) while also keeping his direct opponent quiet. Jack Lukosius is so assured in Gold Coast’s defence, and his skills by foot are excellent. Against the Crows, it dropped, and he will need to get his kicking back to its best to dislodge any of our incumbents. Caleb Daniel is also having a stellar season to date and has given the Dogs plenty of drive from the back half. For these four players, while their efforts have been outstanding, no player could overtake anyone in our back six this week.

There are four midfielders across the league that are putting up terrific performances. First, Collingwood’s Taylor Adams, averaging 25 disposals, and 14 contested possessions. Callum Mills and Rory Laird, listed in our Round 1 team as defenders but now judged as midfielders, are both continuing to influence their team’s winning ways. Mills averages 26 disposals and eight score involvements, while Laird is slightly better with an average of 28 disposals (12 contested) and seven score involvements. The final midfielder we need to spotlight is Cam Guthrie, who has continued to elevate his standing in the game this year. In the three games to start 2021, Guthrie is averaging 31 disposals, eight more than his best year (23 in 2016), and is also putting up career-best numbers in marks and inside 50s.

Forward of the ball, and two players, other than those already in our team, have reached double-figure goals in the first three rounds, Josh Kennedy and Ben King. Kennedy has regained his best form, with four goals in each of the last two games. King, in his third year, has been very consistent in front of goal, with two bags of three goals, to go with his four-goal haul against the Crows. Another player taking the competition by storm is Melbourne excitement machine, Kysaiah Pickett. Kicking four goals against the Giants, Pickett oozes class and enthusiasm out of every pore, and will be sure to come under consideration if his form continues. Finally, Toby Greene returned to form with five goals from limited opportunities. At his best, Greene is one of the best small forwards in the competition, and is getting back to his match winning best.

WHO’S TEETERING ON THE EDGE?

Only two players, in particular, will need strong performances to retain their places in the Round Four team. Bailey Smith has started the season excellently, but with the Bulldogs possessing the strongest midfield in the competition, the weight hasn’t needed to be on Smith to perform especially brilliantly. Smith averages 29 disposals, seven score involvements and six marks, but that came off the back of his best on ground performance in Round One. Should the other Bulldogs midfielders overshadow Smith in Round Four, he may find it even harder to retain his place once again.

The other player we need to highlight is young Swan Errol Gulden. Starting the year astonishingly well, Gulden has tapered off ever so slightly in rounds 2 and 3. Playing further up the ground in the later rounds, Gulden has been solid, and at times very good, but as is customary with first-year players, he has experienced a slight dip in form. Don’t get me wrong, Gulden has had a wonderful start to his career, but other players are circling, and Gulden will need another big effort to keep his spot.

Another eight players jostle for position this week, but isn’t it fantastic that there are so many players having outstanding starts to the season. I predict that as the season rolls on, less and less players will come into and drop out of our line up, but for now, these 22 superstars are our incumbents. Only nine players have held their spots all year, how many will keep their grasp in seven days time?