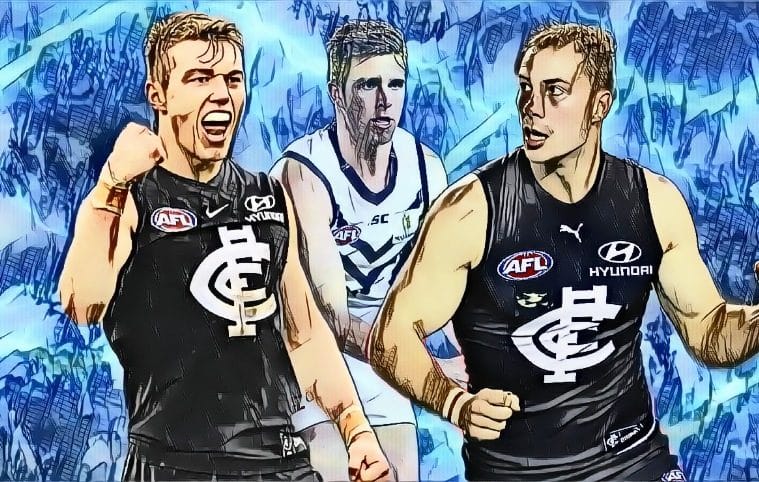 A Not-So-Quick Yarn About The Blues And The Dockers

Earlier this afternoon, Carlton and Fremantle met at Marvel Stadium for an Easter Sunday clash.

A critical game for a winless Carlton, the pressure was on out-of-form superstar Patty Cripps to turn things around. Fremantle came in fresh off an impressive victory against GWS but were without two-time Brownlow medallist Nat Fyfe who was added to the club’s extensive list of injuries last week with a concussion.

Let’s dive in – welcome to a not-so-quick yarn.

The Blues began the day with the endeavour of a team doing everything it can to avoid an 0-3 start. Freo meanwhile, were sloppy. Dropping chest marks and unable to match the Blues attack through the middle of the ground, the Dockers were lucky to be in it at quarter time after Carlton failed to convert some very kickable opportunities. Not to be denied, however, the Blues continued to back themselves and their dominance soon began to show on the scoreboard. Six goals in the second term set up their eventual 45 point victory, spearheaded by a career-high seven goals from Harry McKay.

Among the best for the Blues were Walsh, McKay, Cripps, Docherty and Fogarty while Luke Ryan battled manfully for the Dockers.

There’s no denying Patty Cripps didn’t start the year the way he would have wanted. In spite of this, I found all the talk about him no longer being the player he once was a little unfair. I thought he showed good endeavour against the Tigers and battled all night long to ultimately play a pretty solid game. While against Collingwood he was far poorer and struggled to make any real impact despite a number of clearances. So admittedly, not an ideal start. However, the media attention and fan backlash was the kind of reactionary response typical of us armchair experts.

This afternoon, however, even Cripps’ harshest critics would have struggled to take issue with his stellar 34 disposal, two-goal and 11 clearance outing. You beauty! The raging bull is back. Cripps forced himself into the contest early and in a similar fashion to past weeks, made some errors. What was different to past weeks, however, was that he wasn’t deterred.

Carlton’s skipper refused to be denied the ball. His relentless pursuit at the contest simply outworked the Dockers midfield. Alongside Sam Walsh, the Blues inside duo set the tone for the rest of the team – don’t let anything slow you down, whether it’s a behind, a missed target, or a tackle that doesn’t stick – keep after it and we will get the result in the end. Overall, Cripps gets a big tick in this one.

37 possessions does little to truly highlight Walsh’s impact in this one. He controlled the tempo of the entire contest and ran circles around his opponents. His effort, poise and class was unmatched. Few in the AFL possess a footy IQ as high as Sam Walsh and this afternoon it showed. He is the definition of a workhorse and I’ll be intrigued to see if opponents can stop him in the future.

Another tall forward on fire

So far, the 2021 season has seen an enormous resurgence of classic tall forward dominance. From Tex Waker all year to Josh Bruce earlier in the round, it’s refreshing to see footy going back to its roots. In this particular matchup, it was Harry McKay’s time to shine. Seven goals from the big fella was extremely impressive and the young gun showed off his great hands and elite athleticism all afternoon long.

It is worth noting that Harry finished the day with seven goals and five behinds, about three of the latter should have counted towards his goal tally. A problem in the past, it would appear the young Blue still lacks some confidence in his ability to convert and in closer games against better sides he will need to ensure he doesn’t miss any easy ones.

A quick side note to this one, I was the laughing stock of my friendship group when I broached Harry McKay as a smokey for the Coleman. It looks like Tex will be pretty hard to beat, but Harry has certainly made his case early and looks a genuine threat to be contending for the award later in the year. Can he keep up his consistency? I sure hope so.

There will be no Liam Jones slander here

He has had his ups and downs and I never think Liam will ever completely eliminate the rogue “what the hell was that” moment from his game but his resurgence at Carlton as a defender has been fun to watch and it was again today. I’ll quote his former teammate Patrick Kerr who took to Twitter early in the second term and said “Jonesy is taking the absolute piss”. I don’t think Fremantle wound have found it funny.

Liam patrolled Carlton’s halfback line and was a constant thorn in the Dockers side. He read the ball better than anyone else and consistently cut off Freo’s attempted forward fifty entries. He finished the game with nine marks and had his direct opponents covered, not giving the Dockers forwards an inch.

Could Lachie Fogarty be the Blues best recruit?

Young Lachie Fogarty’s move from Geelong to Carlton flew under the radar during the trade period, but it’s time to take notice. With all the hyper surrounding Adam Saad and Zac Williams, Fogarty has been the most impactful recruit for the Blues to date.

His 25 disposals, seven marks, seven tackles and one goal all contributed to a career-best performance. A performance that wasn’t completely out of the (navy) blue. Fogarty spent the first two rounds flirting with a breakout game. He has consistently threatened around goals and his relentless attack of the opposition is a trademark of his game. Today he was terrific and there is no reason why he shouldn’t continue to improve in the coming weeks. Carlton have found themselves a good one.

An undermanned side struggle

Admittedly, this review has been a little one-sided, just like the game. There really isn’t much else to say, the Blues were far superior and the Dockers weren’t up to it. A lot of it probably came down to injuries, of which Freo have plenty of. Though I’m not giving the Dockers a complete pass, they were similarly undermanned last week and won in spite of it.

The result didn’t go their way today for a couple of reasons; the opposition played significantly better and the Dockers tried significantly less. There was a complete lack of intent and basic skill errors let them down all day. I counted five dropped chest marks in the second term alone. Unacceptable.

It’s not all doom and gloom though because Fremantle have plenty of talent returning in the coming weeks. It’s also perfectly natural for its young core of Brayshaw, Cerong and Cerra to be a bit up and down but any coach will tell you – consistency is key.

My main concern is the lack of output from the likes of James Aish, Travis Colyer and Reece Conca. These middling players will be the difference between a finals finish or missing out. Finals sides can’t have too many weak links and if these players expect to be in Fremantle’s best 22 they will need to earn their spots.

Considering Carlton dominated almost all statistical categories, I struggled to pick out just a couple but I did my best.

That’ll do from me this week. I hope you all enjoyed the read and kudos to Carlton for getting off the mark in season 2021. Happy Easter Mongrels, more from me very soon.