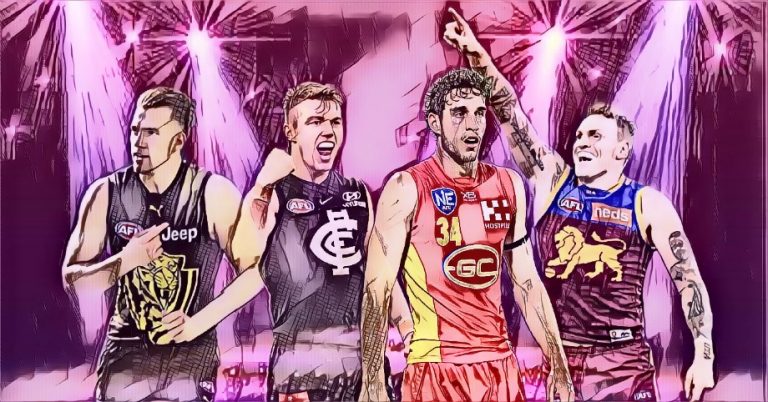 In The Spotlight – Round Three

Welcome to the newest weekly column fellow Mongrels. With each weekly instalment of “In The Spotlight” I take a close look at one player from each of the games of the week.

*Please note – I picked these players before the round commenced, but this article will launch after the Brisbane vs Collingwood game. I’ll stick to my guns and show you my original prediction, right or wrong. Maybe it’ll be the kiss of death, or maybe it’ll breathe some new life into players who need it. Let’s see…

Mitch Robinson: Put simply, Robbo has been awful two games in. I’m not sure what is going on with him but he needs to realise, “If you talk the talk you need to walk the walk”.

He is the “enforcer” type that can actually play the game and be an extremely valuable piece to a premiership contender. Even if not winning the footy he can at the very least throw himself in to help Lachie Neale and Jarryd Lyons. He will need to have his head on in this game, as Collingwood will be well aware he can be a very explosive player one way or another… Id pay to watch him get into the middle and go head to head with Brayden Sier- 90s style head to head

EDIT – The kiss of… life? Robbo was excellent against the Pies and really stepped up when required.

Bailey Scott: The Kangaroo had a dirty day opposed to veteran Gold Coast wingman Brandon Ellis. Ellis touched him up with 33 touches, running riot all over Metricon Stadium. If he avoids the axe this week I can see him as a logical tag for ball magnet, Lachie Hunter.

Scott is very strong in the clinches and one thing is guaranteed – if you hunt Hunter he will take you exactly where you need to go. Some might say Tarryn Thomas or Charlie Lazzaro takes this match up, but I feel that detracts from their ball-winning prowess. Don t get me wrong, I’m not knocking Scott’s disposal, it’s just not as damaging as the run and carry from the other two wing-men. Stopping Hunter will stifle the Doggies’ ball movement, and will be a great feather in the cap of the youngster. He can make Hunter work the other way, as he has 3.1 in his two games for the season so far.

Ben King: All eyes will be on the Suns prized key forward as he becomes the unquestioned leader of the forward line with the injury to Sam Day. The onus will be on the rest of the forwards to let the big guy operate in space and he must take any chances given. With Day likely out for the foreseeable future and the trade of Peter Wright in the off-season, we are all about to see if “The King Can Lead The Way”. A couple of dropped chest marks in the first couple of weeks have been concerning and he needs to turn that around quickly as the number one option.

Adelaide aren’t overly tall in the back-line so he should get his chances; hopefully he can take advantage of them as they present.

Noah Balta: I will be watching closely how Richmond try to match up the attack of Reid and McDonald, as well as the ground level attack of the Swans, which has really helped elevate the expectations of this team.

With Buddy now unavailable, the Richmond defence should be able to shut down the tall options relatively well, which could free up one of their bigger guys to float more often. Balta has benefited from the great team defence of Richmond but has had his struggles in the physical contests. He has more than enough pace to handle any of the Sydney talls, but the marquee matchup of Balta v Franklin (remember when it was Rance v Franklin… ah, memories…) will have to wait.

Peter Wright: The former Gold Coast forward will have to handle a massive load as either the Bombers number one key forward or ruckman. Not only have the Bombers been devastated by injuries to Sam Draper and James Stewart, but they come up against a loaded Saints midfield who also have their own ruck problems.

Missing Rowan Marshall and Paddy Ryder they relied on the mature-aged recruit, Paul Hunter. If Wright is in the middle he might have the edge on Hunter due to his athleticism and fitness, but it will be interesting to see what approach Essendon take, particularly having sustained more injuries to their midfield stocks. If they promote a few half-forwards into the rotation, perhaps Wright can push hard forward from the ruck contests to force a mismatch in defence.

I’m not sure the Bombers are worried about Hunter’s ability to impact the contest, but they will be reliant on Wright putting his hand up and actually playing like the biggest bloke on the park for a change.

Jack Redden: Redden will likely get tasked with stopping the most in-form player in the competition in Zak Butters, and he possesses the kind of defensive edge that might get under the skin of the Power star. Butters has shown an innate ability to damage teams when running forward of centre, often losing his direct opponent in general play generating plenty of opportunities for fellow forwards with his hard work. If you give Butters an inch, he will take a mile…

However, in Redden, the Eagles have a hard-nosed, defensive-minded ball-winner who sticks to his guns no matter what is going on around him. Whether attacking or defending deep in the forward line, Jack Redden always gives 110%. It should be a great match up and a very handy test for the youngster from South Australia.

Patrick Cripps: Earlier in the week it was reported by SEN (lol) that the captain of The Navy Blues has been playing through “a 6-8 week injury” that has required injections to get him on the park. Its a very risky prospect, and if true, could wreck his long term health… Irrespective of that, Carlton play Fremantle who have just lost Nat Fyfe after a heavy bump from GWS’ Sam Reid.

Expect the Blues to return to the contested ball approach to not only get their captain back to his dominating best, but to stop the stupid “Walsh is better” chat. Cripps has done everything in his power to keep Carlton moving. The issue is that the game-plan, based on speed, does not work for them.

Jacob Hopper: I was tempted to put Matt Flynn in this spot, as I’m expecting a mammoth game from Max Gawn, but it’d be a little harsh on an inexperienced player. I would love to see a match up with the two bulls in Hopper v Clayton Oliver… Man, that sounds like a prizefight already doesn’t it!

This contest within the contest could ultimately decide the game, as both midfielders’ primary job is to get “The Outsiders” up and running. You have the up and coming Giant vs the gun Demon, who, for the record, has accumulated the footy at a historic rate. Oliver is third in clearances at nine per game and leads the entire AFL with an average of 18 contested possessions per game (third in total disposals). Hopper will have his hands full with the fiery redhead, yet if Oliver has possession, you can almost guarantee the Giant will be right there with him.

Jack Scrimshaw: Many pegged the former high draft pick as a pivotal part in the Hawks build to the future. With the injury to fellow defender Will Day, and the long term absence of James Sicily, this could be a great opportunity for Scrimshaw.

The addition of the new “STAND” rule should benefit a player with his calibre of foot skills, coupled with the otherworldly genius of Clarkson. He had only the nine touches but gained 219m and operated at an elite efficiency (89%) in Round Two so a lift is required. He does lack pace, so maybe watch him try to take on a lesser pacey player such as Higgins, who he may be able to work off defensively and be used in that “quarterba…. errr, linkup role.

THERE ARE NO QUARTERBACKS IN THE AFL

I hope you all enjoy my debut and hopefully it provides some insight, and perhaps gets some recognition to some of the more unsung players of the game…

If there are any players you think should be in the spotlight this round, by all means, list them in the comments or on our socials.