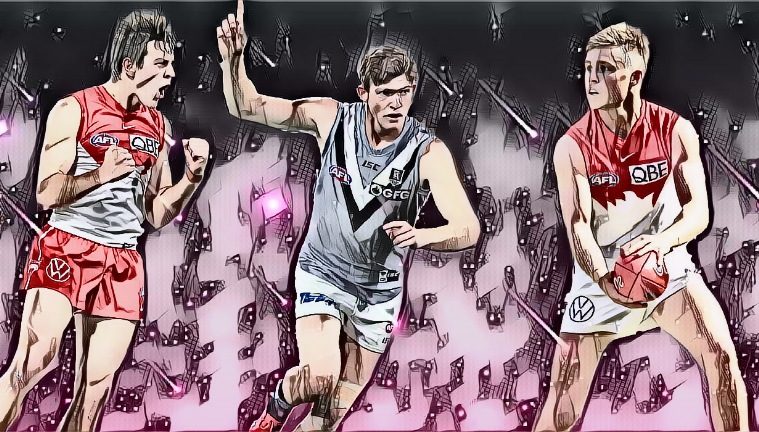 So here at the Mongrel we’ve taken it upon ourselves to rectify another good AFL idea not quite reaching its potential – this time the Ron Evans Medal for the rising star. We’ve decided to rename it the creative ‘Mongrel Rising Star’, but will keep the same eligibility criteria as the official award, players cannot have played more than 10 senior matches or turned 21 before the start of the 2021 season. We’re we are adding our very unique magic mongrel secret herbs and spices formula is to the voting system, which presently involves seven assorted media dinosaurs desperately trying to remember the name of the top five most popular kids that Sportsbet have installed as favourite. Our system will see a 5,4,3,2,1 vote system applied each round and cumulative scoring with the winner crowned by finishing with the most points.

Of course this doesn’t ensure our methodology is fool proof, but without being arrogant, we think we can do it a little better than the AFL. So without further ado (we’re also cultured speaking French, Gil would love that), here are your first five vote-getters in the remarkably catchily named ‘Mongrel Rising Star’ award for 2021:

How will history remember the first few picks of the 2020 National Draft? On exposed form there might be some eyebrows raised as to why the Dogs, Crows and North allowed Sydney two bites of the cherry with Logan McDonald gifted to the harbour city before the Bloods were forced to match Hawthorn’s bid on the ultra-impressive academy selection Braeden Campbell. Right now the Sydney hierarchy are rubbing their bellies, satisfied with the extra helping afforded them, particularly based on the stunning form shown by the youngsters in the early stages of the 2021 season. Campbell threw his name into the hat for the Ron Evans medal in round 2, the only time in the Rising Star’s history the same club has proffered the first two nominees in a given season on the back of a seriously impressive outing against the Crows.

Twenty-five disposals including 21 kicks, an intriguing trends with many of the new young stars at a cool 80% efficiency. His eight rebounds from defensive 50, five entries into the forward 50, five intercept possessions and score involvements stood out, but it was his enormous 708m gained (almost double the next best of any eligible rookies) that really consolidated his top ranking this week.

In the Rod Stewart classic ‘Young Turks’ (for Errol’s ancestry) the hirsute Scot sang ‘Time is on your side’, Gulden obviously was more a fan of the great footy orator, John Kennedy who boomed ‘It’s later than you think’ – for he is playing like a man on the precipice, not one only two games int a career. Another stellar game saw Gulden record 11 score involvements placing him equal 5th in the league with an astonishing average of ten per game, along with two more direct goal assists placing him second on the AFL table just behind the incomparable Dustin Martin. A neat 22 touches at a 73% efficiency and a goal slot Errol into a commanding early lead for the coveted ‘Mongrel Rising Star’ medal.

The Port Adelaide key forward was a late inclusion after Todd Marshall didn’t get up, and as they say in the classics never give a sucker an even chance as he put forward a compelling case to Ken Hinkley that he should partner monolith Charlie Dixon in the Power forward line. 13 disposals, eight marks, including four inside forward fifty, seven score involvements, two tackles inside the forward 50 and a career-high four goal performance give Mitch the three votes for round 2.

For those whose hearts beat true in the early 90’s its not impossible to imagine them thinking former Oakleigh Charger graduate James Jordon might be about to bring them the right kind of love (James is close enough to Jeremy, right?), but either way he’s capturing the imagination with his gritty work alongside a diamond encrusted midfield group. 20 disposals, six marks, and impressively nine tackles including a league-leading four inside the forward fifty have Jordon in the votes this week after being strongly considered after their round 1 victory over the Dockers.

Another player unlucky to miss the votes last week, and yet another Sydney player, Chad Warner refused to allow perhaps higher profile recruits to the SCG steal the limelight with a sensational match that saw him return twenty disposals and 319m for his team, eight score involvements, six inside fifty thrusts and two goals. It’s not at all out of the question that the first month of the year can result in a clean sweep of nominations to the Swans developing stars.

Tyler Brockman, the third-round Hawk pick was highly rated by his home-town Eagles but snapped up by the keen eyed Hawk recruiters and followed up a 3-goal first quarter in the NAB Practice match series with two gaols in each of his first two senior appearances. Four marks inside 50, a rookie-leading four 1%ers, and three bounces showed a glimpse of what could be to come.

Minairo Frederick, the Fremantle speedster lit up the Optus Stadium track with seven I50, alongside seven score involvements as he proved too hard working for his Giant foes.

John Longmire has aggressively made it known he does not believe opposition clubs should comment on players at other clubs, well with a seeming abundance of platinum talent at his disposal it’s going to be hard to stop the accolades, particularly if Franklin can wind back the clock and give a little more pizzazz to an exciting Sydney revival. The Demons under pressure before the season have commenced with two victories and plenty of youth complementing the established stars, while premiership fancies Port continue to roll out talented kids ready to perform at the top level. After the frenetic start to the year let’s see which kids can continue to flourish, while others creep back to the pack as opposition scouts discover flaws in their games.