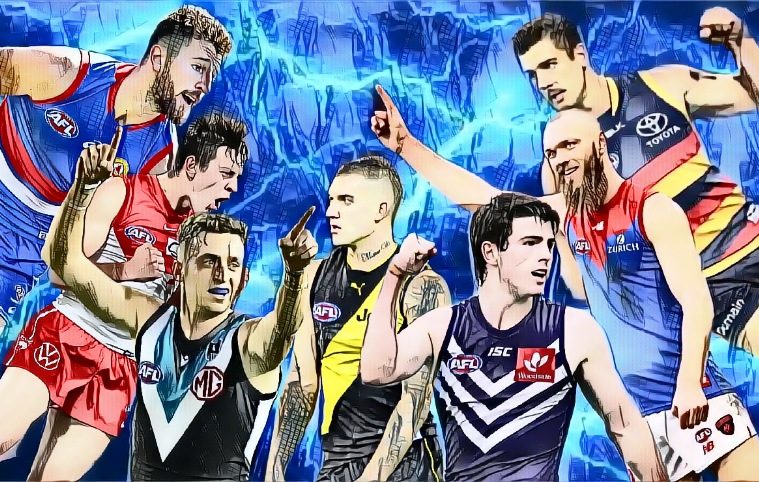 Round Two is in the books. As I am writing this, Brisbane’s clash with Collingwood has been moved to Marvel Stadium, Gold Coast making a mad dash for Adelaide, just to get out of Queensland before they are unable to, and Travis Auld once again has the nightmare job of reorganising a fixture that could spiral out of control.

Rather than focusing on the negatives, let’s focus on the 22 players that make up the next instalment of the Rolling All Australian team. How many players have retained their place? Who has forced their way into our team of superstars? Here is the Round 2 Mongrel All Australian line-up.

Let’s first revisit our team from Round 1:

Ridley followed up his 21 disposal performance display against Hawthorn with a near-perfect 32 disposals against Port Adelaide. Going at 90% efficiency – excellent considering 23 of Ridley’s disposals were kicks, Ridley took seven marks, had an astounding 12 defensive rebounds, and 616 metres gained.

Hardwick was superb against the Tigers on Sunday, but he did have plenty of chances to impress given the amount of ball that came his way. Amassing 31 disposals and 15 marks, Hardwick used his lethal foot to perfection. 27 of Hardwick’s disposals came by foot, and he also registered eight defensive rebounds.

Much like Ridley and Hardwick, Dan Houston was a rebounding machine against Essendon. Gathering possession 25 times, Houston only missed his target once, and kicked the ball 21 of the 25 times he disposed of it. Houston also ventured further up the ground, registering six inside 50’s to go with six defensive rebounds.

CENTRE HALF BACK: STEVEN MAY (MELBOURNE)

After missing out on the second key defensive position by the skinniest of margins, I could no longer ignore the Melbourne beast. After 24 disposals against Fremantle, May was again at his best with 23 disposals against the Saints. Like his other incoming defenders, the vast majority of May’s disposals were by foot (at 86% efficiency), and he also hauled in eight marks.

Bontempelli was the unluckiest player to miss the Round 1 team, and he followed up that performance with a three Brownlow Medal vote display against the Eagles. Gathering 30 possessions, at an astonishing 93%, along with 10 contested possessions, Bontempelli had 14 score involvements, six marks and five clearances. Bontempelli also moved forward and hit the scoreboard, kicking three goals, including the vital match-winner.

Nat Fyfe is a two-time Brownlow Medallist. But two rounds into the 2021 season, Andrew Brayshaw is Fremantle’s best player. After his 29 disposal effort in round 1, Brayshaw was once again his team’s best player, with 32 disposals and two goals against the Giants. Brayshaw was everywhere for the Dockers on Sunday evening, registering nine score involvements, six tackles, five inside 50’s, and had a disposal efficiency of 84%.

Sitting second in the Coleman Medal race, Riewoldt backed up a four goal haul against Carlton with another four goals against the Hawks. Working in tandem with Dustin Martin, Riewoldt was a constant and consistent presence for Richmond’s midfielders to kick to, and he also had eight score involvements, the same as the week before.

After a good performance against Fremantle, Gawn was back to his brilliant best against a depleted St Kilda. Amassing 40 hitouts, 17 disposals (eight contested) and eight score involvements, Gawn’s main excellence came in his defensive play, as every time he contested a centre bounce, he’d then run back into the defensive hole to cut off any St Kilda forward thrust.

Moving firmly into the midfield has been a masterstroke for Jack Crisp, who was arguably best on ground on Thursday night. After a decent outing against the Bulldogs, Crisp was excellent against the Blues, gathering 36 disposals (15 contested), seven marks, seven score involvements and six inside 50’s, Crisp has given Collingwood’s midfield another string to its bow. More performances like this one are sure to follow, and Crisp will no doubt give opposition coaches many headaches all season.

Warning. This could be a long entry. Long-time readers of my articles will know of my unbridled love of Power young gun Zak Butters. I’ve bought Butters stock early, and my investment has been more than rewarded. Against North Melbourne, Butters was his usual classy self, with 16 disposals and two goals. This week, however, Butters exploded. Gathering 36 disposals (14 contested), along with eight score involvements, and six clearances, Butters was a force in the midfield, and put together a performance that had many now believing Butters has become the best of Port Adelaide’s 2018 draft trio. I could go on for days talking about Butters, and in my perfect world he’d occupy every single position in my All Australian team, but I have to be impartial, and Butters finds himself on the bench for this instalment of the team.

Once again a possession winning monster, Macrae combined with arguably the best midfield in the competition to put West Coast away in an enthralling contest on Sunday. Gathering 41 disposals, Macrae is the leading possession winner in the competition. Against the Eagles, 15 of Macrae’s disposals were contested, and he also registered nine clearances, eight inside 50’s and an incredible 14 score involvements.

Sam Walsh and Bailey Smith swap places this week, as Walsh has become Carlton’s clear best player, and his best on ground (for Carlton, not overall) performance against Collingwood has elevated him onto the field. Smith, while very good against West Coast, did not have as good a game as some of his teammates, and as such he finds himself sitting on the pine. Tim Kelly takes his place underneath Max Gawn after another wonderful display against the Dogs. Finally, I am firm believer in the Coleman Medal leader being placed at full forward of an All Australian team, regardless of how far up the field they travel. Hence, Tex Walker moves from centre half forward to full forward.

Let’s begin where premierships are won; defence. Four players have dropped out, two of them because they’ve started 2021 in the midfield, rather than their usual defensive posts. For Rory Laird and Callum Mills, whilst both put together very good follow up performances, we must now grade them as midfielders, and their performances, whilst very good, could not edge out any of the players either keeping their place in the midfield, or entering the centre square for the first time. Jordan Butts, who played very well last week on Tom Hawkins, found the going tougher against Lance Franklin, and was overtaken by Jordan Ridley. Finally, Steven May, after coming ever so close in Round 1, overtakes Aliir Aliir for the second key defensive spot, thanks to another excellent performance in the back half for the Demons.

Turning our attention to the midfield, and this was extremely tough on some of our incumbents. Tom Mitchell is the equal leading possession winner over the first two rounds, but despite that, I felt that Mitchell was nowhere near as damaging as a player of his standards should’ve been against Richmond, making his place untenable. Andrew McGrath had the slightest dip in form and his place was taken by Andrew Brayshaw, Travis Boak racked up 30 disposals and had a very good game against McGrath’s team, but I felt that he was overshadowed by some of his teammates, one of whom was rewarded with selection ahead of Boak, and Jaidyn Stephenson followed up his 33 disposal performance against Port Adelaide with a decidedly average 14 possession effort against an arguably weaker opponent. In the ruck Scott Lycett did absolutely nothing wrong, but Max Gawn dominated against St Kilda, and couldn’t be overlooked again.

Forward of the ball, and only two players couldn’t quite back up in Round 2. Oscar Allen, after a breakout game against the Suns, couldn’t capitalise on a slightly weaker defensive unit, and was overshadowed by teammate Josh Kennedy, and Tim Membrey was good, but inaccurate against the Demons. Both players were serviceable, and at times produced excellence in their respective matches, but neither could retain their places.

With all of that said, here is how the team looks after Round 2:

Putting aside the 11 players who unfortunately dropped out (because we know their selections in most cases were millimetres apart), there are a group of players waiting in the lobby, all putting together wonderful performances.

Changkuoth Jiath is fast becoming a cult figure at Hawthorn, and his bouncy enthusiasm is infectious. Nic Natanui is again producing terrific performances in the ruck for the Eagles, and was only overlooked because Max Gawn’s team was victorious. Ollie Wines had 38 disposals for Port Adelaide (17 of which were contested), but he only went at 55% efficiency and will need to correct that aspect of his game. Isaac Heeney is thriving in Sydney’s forward line, and had kicked six goals in two rounds. If he continues this form, and can gather a bit more of the ball, he will no doubt come under consideration.

Sam Docherty has been excellent in the back half for the Blues, and has produced the uber consistency we’ve come to expect from Carlton’s co-skipper. Taylor Adams, Collingwood’s next captain, has been a contested beast for the Magpies, averaging 13.5 contested possessions this year. Zach Merrett too has been wonderful in the middle of the ground for Essendon. Finally, Christian Petracca is arguably the player kicking the door down the most, averaging 27 disposals, 550 metres gained, and eight score involvements. Working against Petracca this time around is his disposal efficiency (60%). If Petracca can correct this, no doubt he will find his way into the 22 sooner rather than later.

11 players going in and out in one round is unusual, but early in the season you’ll see many players jostling for position. As the season rolls on, more and more of our players will settle into the season and string together performances worthy of team retention, and perhaps the 11 incoming players just started 2021 ever so slightly slowly, and now have shaken the cobwebs.