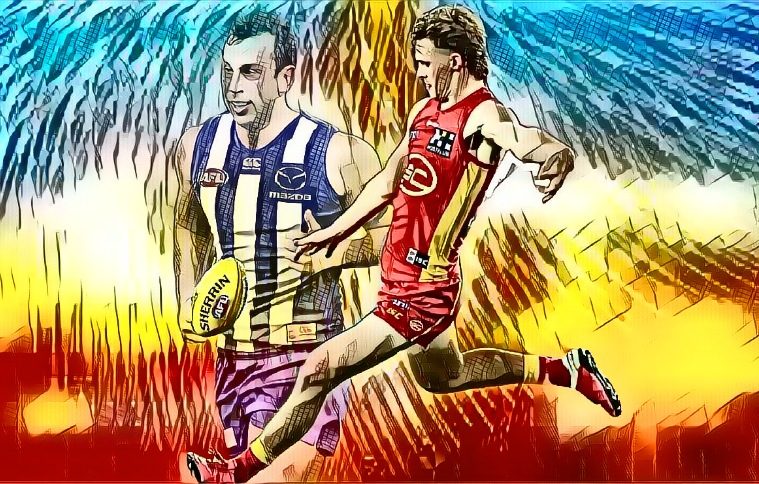 On Saturday night Gold Coast Suns took on North Melbourne in a battle of 0-1 teams under the bright lights of Metricon Stadium. Both sides were tipped to finish outside the top eight, yet the consensus is that one outfit was on the rise and the other was ready to fall. Looking to avoid the dreaded 0-2 start, there was plenty on the line in this clash that could define the outlook for the season of these teams. Let’s take a look…

The Suns put on a great performance, showcasing the young talent they have assembled. Running away with a dominant, albeit inaccurate 59-point win. Gold Coast registered an impressive 14.14 (98) to 5.9 (39) victory. The Kangaroos took a long time to get going and by the time they found their feet, the contest was well and truly over. The win was soured by a potentially devastating knee/leg injury to second-year defender Connor Buderick and a depth challenging blow to key-tall Sam Day, so their stocks appear to be tested in the coming weeks.

Leading the way for the two midfields were the Anderson namesakes.

Noah: For the non Suns fans he is no longer known as just “Rowelly’s best mate” The former number-two draft pick ran out there with his own footy in this game. Compared to last week’s game, he focused a lot more on his stoppage work and defensive positioning as well as his natural instincts and ball winning ability. He set the tone early with 12 first-quarter disposals, getting the Suns midfield up and running. He had the best game for his career with 35 disposals, nine marks, seven clearances, and a whopping ten score involvements. If he sticks to refining his defensive instincts he will be set for more midfield time on the inside, which may bring out the absolute best in this kid.

Jed: His willingness to work, even when the chips were down was an absolute credit to him and for long patches he was carrying the Kangaroos midfield. Not until the second half did others start to pick up the slack, but by then the game was well and truly gone. The amount of respect this guy won in the contest tonight was massive and Jed deserves to get his name mentioned as one of the upper echelon mids in the game. I don’t feel he gets the respect he warrants by the general AFL fan that doesn’t partake in Supercoach. 27 possessions (including 17 contested) for him tonight. However, an extremely disappointing statistic is that he laid 14 tackles in the game, the next closest Roo had five.

This might come as a surprise to a lot of Suns supporters (considering I am one as well) but I was extremely impressed with the way Ben McKay played Ben King, and I feel he at the very least got the match-up 50-50. Despite the amount of run and carry through the midfield the big Roo was able to stay step for step with the Sun for the contest. Weight of numbers won out on the odd occasion and despite the scoreboard showing King kicking 3.1 his direct opponent McKay was not responsible for two of those goals kicked.

It is more of a credit of the Suns running hard and forcing switches that allowed King to capitalise. King could have kicked a fair few more for the night but he seems to have inherited the hands of “Two Metre Peter” and with the injury to Day, he is about to shoulder much more responsibility as the unquestioned focal point of the Suns. He took a nice contested mark and kicked truly in the third quarter, demonstrating an improved body strength and a willingness to fight for front position.

Suns fans would have been thrilled to see the other “Ben” of the Ainsworth variety, return after missing Round One with a hamstring niggle. He had 14 disposals in his return and looked dangerous but had a big of the excited 16 year old boy about him – often rushing things when taking his time and making long slow love to… errr, he needed to slow down a bit. 45% efficiency just doesn’t cut it. Maybe he was just getting rid of the rust, because he is a handful when in full flight.

The run and carry off the Suns’ backline was tremendous. Take this with a grain of salt due to depleted opposition, but the GC defence appears to be covered on all bases now. Combine the aerial work of Collins and Ballard, throw in the foot-skills and IQ of Bowes, Budarick and Lukosis and a ‘Dash’ of pace with Markov, Lemmens and Powell and you have a very exciting mix.

In two passages of play, Oleg Markov showed what has excited Suns fans since they acquired the former Richmond dasher. In both instances he produced full ground runs, dashing through the middle and taking the game on. Seeing him in full flight evoked memories of former Sun Adam Saad, yet I much prefer watching the majestic moustache flowing in the breeze. Although his goal was  (dare I say it ) an absolute MONGREL 🙂 it gave a glimpse into the exciting future of what’s possible.

Speaking of foot skills, it must be mentioned that seven of eight of the defenders operated at over 70% with their disposal efficiency.

As stated, it took most of the supporting crew of North Melbourne a half of footy to switch on. Jy Simpkin and Luke Davies-Uniake, in particular, were blanketed early, although when they got going they showed they can cause some damage. Shaun Atley and Jed Anderson were arguably the two that gave full four quarter performances in the coal-face but it wasn’t enough.

In contrast, from the opening bell the Suns were up and about. Goldstein and Witts effectively played out a draw but the Suns were hungrier for the football. Touk Miller and Lachie Weller were a handful in space, digging the ball out at every opportunity and in particular showing their gut running. On the inside, Will Brodie and Hugh Greenwood took turns with Davies-Uniake, who was only able to make an impact when the injury to Day forced Greenwood into the ruck to give Witts a chop out.

The Suns midfield are one of the more unique units in the AFL as they seem equally adept at playing contested or spaced. While the elite level isn’t quite there yet, it is almost becoming a pick-your-poison-type unit.

Put simply, you would have expected North to have given a red hot crack in the first half and maybe run out of legs later. This was, in fact, the opposite. For long periods the Roos almost appeared disinterested, making simple errors such as a 6-6-6 violation within the first quarter and conceded a free-kick from a second infringement before half time. Perhaps they copped a bake at halftime and that woke them up, as their pressure and game lifted.

Two young Roos deserve their own mention here. I was really impressed with second gamer Charlie Lazzaro on a wing. Although beaten by the much hardened Lachie Weller, I liked what the young Roo was able to get done. Looking to take the game on he just kept on the move and trying to make something happen, and as his confidence grows his disposal will become more damaging. North Melbourne you have something here…

Aiden Bonar, take a bow. The former Giant midfielder has made his mark in the backline. He was brilliant in manning up on one of the most talented players in the AFL, Izak Rankine. Rankine was able to get in good positions with the breaks in play, but for the most part, Bonar stuck to the mercurial forward like glue.

Again, like King the numbers don’t tell the full story of how close this match-up actually was. He fought manfully in a losing battle with multiple forward entries coming his way. Rankine also had an impact in the game with 3.2 from 15 disposals. His snap in the pocket was absolute class

For this weeks blast, this might sound unusual to pick one from a 10 goal winning side… And don’t get me wrong, I’m not crucifying him

But for me it is Alex Sexton. Bear with me Suns fans.

When the midfield dominance was at its peak in the first half, “Secco” was doing what he does best. Dictating play, and being a creator. He had six disposals and 2.1 on the scoreboard to halftime. Many, me included, expected him to take the game over as he does, but once Day went down and the disposal from midfield was a little more rushed, Sexton completely disappeared.

He added just two more disposals for the rest of the game. A few people know I’ve spoken about what I feel he needs to take his game to the next level, tonight was a prime opportunity but he never took it. The work-rate and defensive pressure just was not there. He got dropped multiple times for it last season and I believe that might be a big part as to why.

Nick Holman looks to be the perfect choice for the “medical sub” He injected himself into the game in the second half and was very effective in providing a hard edger and contest around the ball. The Suns walk taller with him on the park.

I don’t mind the use of Josh Walker as a defensive wingman when need be. The only problem is that somebody needs to provide a contest when he is not there. Reads the ball well in flight and is a big asset to the Roos no matter where he is.

Jared Polec made one of the worst defensive decisions I’ve ever seen. Chasing a loose ball into the defensive goal square he was tackled by Ben King. Instead of rushing a behind or attempting to clear the ball he allowed to be spun in a tackle, hoping to be carried over the line. He dropped the ball though and was pinged and the resulting free kick from the goal line was slammed through for a major score.

2021 will be an interesting year for Cam Zurhaar. He was largely blanketed by Sean Lemmens in the forward line yet saw real results when thrown off half back and into the midfield. His charging attack on the football was a great sight and made an impact in the stoppages. Unfortunately, his tank was gone after a few minutes. But the signs were great and that’s a tactic that could be of great advantage in crunch time.

I really like the look of Tom Powell and Lachie Young. They will be two absolutely critical pieces for North Melbourne in the coming years, and I’m excited to watch them develop. Throw in Will Phillips and you have a great start to the rebuild.

Has there been a more under-the-radar recruit than Brandon Ellis to the Suns?  33 disposals and eight marks for the former Tiger wingman