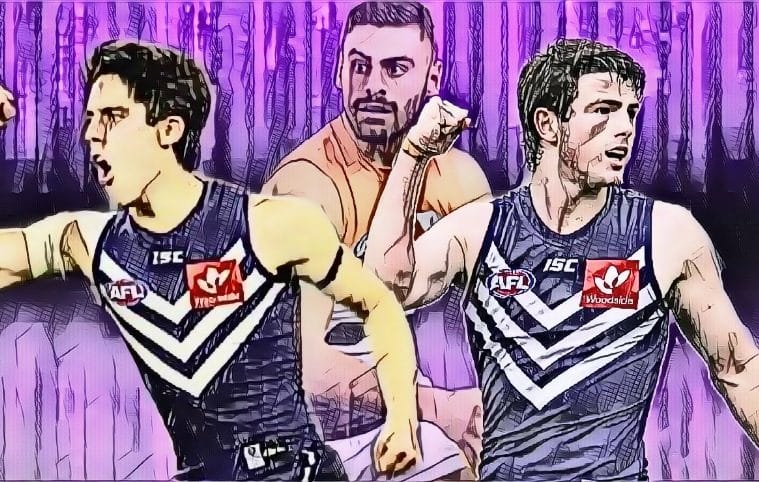 Where are GWS and Fremantle at with their lists and development this year?

Most have them both tipped to finish middle of the ladder somewhere. Some ambitious tipsters even had them in the bottom four. We saw the best and worst of the Giants last week as they coughed up a late lead at home to hand St. Kilda an eight-point win. Fremantle on the other hand struggled to chip away at an early lead taken by Melbourne at the MCG, eventually going down to the tune of 22 points. Nat Fyfe was in fine form gathering nine clearances in that game – the equal most of any player for the round.

The last time these two teams met, Lachie Whitfield put on a midfield clinic whilst Jeremy Cameron and Jake Riccardi each kicked four goals to sink the Dockers by 38 points on their home patch. It was a different-looking team for both sides this time, different rules regarding the man on the mark, a different-looking game with longer quarters and an injury sub player on each bench.

Plenty of questions were floating around Greater Western Sydney this season; Have the Giants got enough manpower up forward to compensate for the loss of Jeremy Cameron to Geelong in the offseason? Can Tim Taranto continue to impress and take his game to new levels? Is Steven Coniglio really the right man to captain this young club and lead them towards their next finals push? And what will Toby Greene do to piss the entire AFL off this week?

Likewise for Fremantle; Will their 35 year old stalwart in David Mundy continue to defy his age with class and add to his 333 game tally? Can former No. 2 draft pick Andrew Brayshaw pick up where he left off last year as a frequent Sherrin accumulator and tackling machine? Are Adam Cerra and Caleb Serong able to maintain their roles as the beating heart of Fremantle’s engine room with longer quarters in 2021?

It took only 30 seconds for Jacob Hopper to score a goal for the Giants and the first of the game. Andrew Brayshaw kicked truly to give Fremantle their first and take the lead by a solitary point. We saw an exchange of six behinds before the Dockers could score the next goal compliments of Lachie Schultz. From there it was all Fremantle, lead by a dominant Brayshaw, Cerra and Mundy. The Dockers kicked another two goals for the quarter to make their score at the break 4-6-30 to the Giants 1-5-11. Out of 16 scoring shots for the quarter we saw only five goals with both teams missing some easy shots.

More wayward kicks on goal to open the second quarter before Nat Fyfe snapped truly to take the Dockers lead out to 25 points. A further run of inaccurate kicking plagued both teams as a run of eight straight behinds shared by both teams really wasted Fremantle’s dominance. For all their effort to win the ball and move it inside 50, their lack of composure hampered their ability to convert their dominance into goals. Fremantle only managed to add two behinds to their quarter-time lead to hold a 27 point advantage over the Giants at halftime.

It took under two minutes for us to finally see a goal in the third! It was the first since the six-minute mark of the second quarter. A dazzling dash down the wing and into forward 50 by Bobby Hill set up Harry Himmelberg for a set shot which he kicked truly and the Giants got their first goal since Hopper opened their account in the first 30 seconds of the game. Not to be outdone, straight afterward, Caleb Serong nail eda pinpoint bullet of a pass into Matt Taberner for Fremantle’s sixth goal. Andrew Brayshaw showed his agility by sidestepping two Giants players to run inside and kick a visually pleasing goal. A further exchange of behinds saw Fremantle’s lead at 35 points. Two more goals to Fremantle and a post-siren goal to see Harry Himmelberg kick his second had the three-quarter time margin at 40 points the Dockers’  way.

A further three behinds to start the fourth quarter began to look like an everlasting trend before Zach Sproule bobbed up for the Giants to kick his first goal in the AFL. It wasn’t long before he was on the end of another one to kick the second goal of his career after the Dockers got one back through Lachie Schultz. Another string of behinds followed before Toby Greene feathered his stat sheet for the night by kicking two in a row for the Giants, reducing Fremantle’s lead to 26 points. Lachie Schultz kicked his third for the game in the dying minute to finish the game with scores of 11-21-87 for Fremantle and 7-14-56 for Greater Western Sydney.

WIN ON SUNDAY, SELL ON MUNDY

Plain and simple, how good is David Mundy? As mentioned earlier, for a bloke fast approaching his 36th birthday he still has a raft of skill on offer for the Dockers. Finishing the game as arguably Fremantle’s best player alongside Andrew Brayshaw, Mundy was in absolutely everything and his willingness to compete was a real lead-by-example effort.

Surrounded by teammates still on their P-Plates, Mundy’s stat sheet for the night read 35 disposals, five tackles, six clearances, six inside 50s, 552 metres gained, four intercepts and 15 score involvements. Not bad numbers for one of the elder players in the league.

There was one instance later in the game where you saw him guide his younger teammate through the middle and show him the path to kick to the forward’s advantage. Some players are just born to lead and share their experience to benefit the players around them and David Mundy is a prime example of this.

A GIANT LACK OF SPREAD

Fremantle capitalised on the Giants’ inability to spread and cover the ground by absolutely carving them up with freedom to transition their ball forward. As highlighted at halftime, contest after contest the GWS players would all crowd the ball and wait for it to come out, only for Fremantle to win the clearance and with one swift kick they were out the back and away virtually unchallenged. It honestly made some of their passages of play look like training drills.

When you have Tim Taranto and Jacob Hopper playing almost lone hands at the contest to clear the ball in the first half, but a failure to spread by the Giant’s outside players caused the Fremantle mids to pounce and swiftly convert the contest into a dash down the wing towards their almost open goal. Not that they managed to punish them enough with their abundance of missed shots on goal. This was explained to me though! Compliments of our very own resident weatherman here at the Mongrel Punt, Matthew Passmore. Seriously, he could give Jane Bunn a run for her patchy morning fog.

According to his live expert weather analysis, we saw a very inconvenient breeze that blew right across the face of goal but not throughout the middle of the field. Going left to right at ground level and right to left where it’s high, players were allowing for one breeze and getting the other. Back to you Jimmy!

Fremantle have a great crop of young players coming through. Adam Cerra, Caleb Serong, Andrew Brayshaw and Lachie Schultz were all consistent contributors that proved to be too much for the Giant’s to handle at home. It’s a great distribution of talent at Justin Longmuir’s disposal – the kind of youthful balance that you can really build a champion team around.

For a team with an injury list as perennial as your Grandma’s Chrysanthemums, Fremantle having a solid foundation of young players that can both tear a game apart, and steady the ship when goals start going the other way is the beginnings of force to be reckoned with. Young ruckman Lloyd Meek also held his own and showed signs in the ruck, albeit against a fellow first season ruckman.

ANOTHER WEEK, ANOTHER HIT

Are we going to stop the press every time someone is collected high? Or only when a star player is involved? It seemed to be the latter for a long time until the AFL started to come down hard on protecting the head and neck of the players in a contest.

Last week it was all Dangerfield, this week it will be all Sam Reid thanks to an errant, off-the-ball hit that collected Nat Fyfe high and forced him off the ground. He failed to return to the field, instead being subbed out after having a concussion test.

The journeyman will certainly come in for strife with the AFL’s revised rules around knocks to the head. Especially given that Fyfe spent the remainder of the game with his backside on the pine.

Leon Cameron is in the unenviable position of where the hell do we go from here? Starting a season 0-2 for the first time since 2013, alarm bells must be ringing for the Greater Western Sydney coaching staff.

How do you get Toby Greene into the game when you need that spark? He hit the scoreboard late, but when the Giants needed a forward to break the shackles he was well contained. Where did Tim Taranto go? After ten disposals and four tackles in the first quarter alone, he only managed another 13 touches for the rest of the game. His impact was well and truly quelled. Josh Kelly was another who disappeared in patches when he was needed.

Once the Fremantle mids started shifting into overdrive and their outside runners had free reign to take the ball forward, the Giants ran out of answers alarmingly quick.

Fremantle will fly to Melbourne to take on Carlton at Marvel Stadium next Sunday.

Greater Western Sydney will fly home and take on an up-and-about Melbourne on Sunday evening.

Here were a few of my notes throughout the game.

– Fremantle taking marks for fun, GWS struggling to hold onto anything.

– Matthew Taberner’s four contested marks were a highlight, shame he couldn’t convert all of his opportunities – he wasn’t the only one.

– Sean Darcy with his tap to Sam Switkowski for a goal was almost slow-motion ruck elegance. Great to see from the big fella.

– Mundy on fire in the middle frees up others to wreak havock in the forward line. Again, shame he couldn’t capitalise by converting.

– What was Sam Taylor thinking? That attempted spoil was poor and costly. Had he kept his feet the ball would’ve fallen into his arms.

– How good did Michael Frederick look running along the wing or into an open forward line?

– Every time a player sidesteps or blind turns, it’s called a shake and bake. Over and over again. We. Get. It. But I’ve got to say, “Herky Jerky” is a new one. I’ve heard someone giving someone the shake and bake a thousand times. Never heard of selling the dummy being called the Herky Jerky before tonight.

– Luke Ryan looked good overhead. He controlled everything that came in his direction.