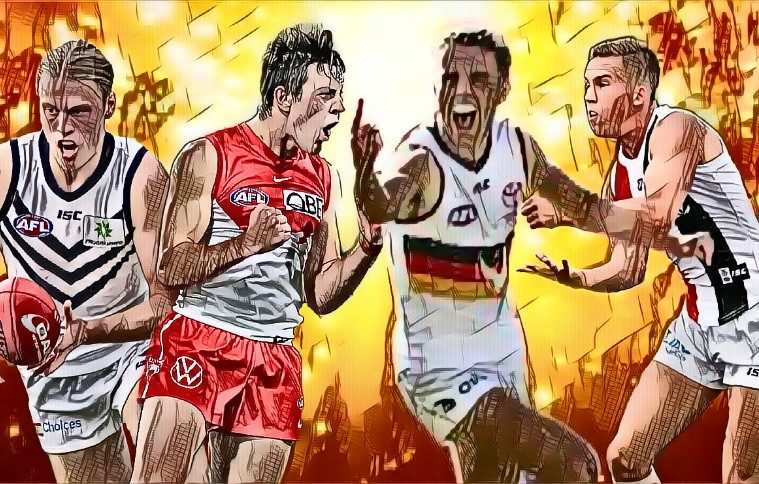 Many other awards, among them the selection of the AA team, the 22-under-22, and even the AFLPA MVP have significant limitations that prevent them from hitting the lofty heights they set out to achieve.

So here at the Mongrel, we’ve taken it upon ourselves to rectify another good AFL idea not quite reaching its potential; this time the Ron Evans Medal for the rising star. We’ve decided to rename it the creative ‘Mongrel Rising Star’, but will keep the same eligibility criteria as the official award, players cannot have played more than ten senior matches or turned 21 before the start of the 2021 season. However, we’re we are adding our very unique Magic-Mongrel secret herbs and spices formula into the voting system, which presently involves seven assorted media dinosaurs desperately trying to remember the name of the top five most popular kids that Sportsbet have installed as favourite.

Our system will see a 5-4-3-2-1 vote system applied each round and cumulative scoring with the winner crowned by finishing with the most points.

Of course, this doesn’t ensure our methodology is foolproof, but without being arrogant, we think we can do it a little better than the AFL. So without further adieu (we’re also cultured speaking French, Gil would love that… and I know it’s “ado” – I just wanted it to sound French-er), here are your first five vote-getters in the remarkably catchily-named ‘Mongrel Rising Star’ Award for 2021:

Gulden presented as a star in the making long before his dramatic second-quarter takeover at the Gabba on Saturday night. Relishing the limelight of draft week, he spoke excitedly about his Turkish heritage and with a charming enthusiasm of his prospects.

His debut match was something else altogether, though, and it makes me wonder if Anthony Hudson went twenty years too early with his seminal call Lenny Hayes the player with the rockstar name. A frighteningly efficient 17 kicks among nineteen disposals, ten marks, three goals, three goal assists, seven inside 50s, nine score involvements and 459 metres gained is the stat sheet of a seasoned superstar at the peak of his powers.

It’s not out of the question Errol breaks Rowell’s record last year for the earliest 3-vote game in a career, a clear stand out in Round One.

Sholl carried over his stunning 2020 form which saw him finally rewarded with a rising star nomination in the ultimate round of home and away action with a prolific game against the fearsome Cats.

Diminutive in stature, but possessing electric pace, Sholl terrorised the Geelong wingers and flankers, racking up 457m across 23 touches, nine marks and driving the ball inside forward 50 on three occasions. The only minor blight on his performance was a game-high seven turnovers – no doubt a result of his breakneck speed.

Young was probably the least celebrated of the triumvirate of Dockers taken with picks 7,8,9 in the 2019 draft during their first season in the big time, but quickly addressed that with a mature and composed outing against the Demons at the spacious MCG.

Returning nineteen disposals, similar to Gulden preferring to deliver by foot, which he did 17 times, Young returned the ball from defensive 50 eight times, and displayed his all-ground game with a further three inside fifty entries to be one of his sides best players in a disappointing loss.

The young Saint had a career game in just his fourth outing, excelling in the treacherous conditions to collect a game-high ten tackles, six clearances, including five from stoppages and importantly drove the ball inside forward 50 five times in a close-fought game.

With a long injury list and a matchup against the scorned Giants on their home deck, this was a real statement performance by the Saints, no better personified by their midfield bull in the number 23.

The die-hard Swans are salivating over the return of Franklin to stand alongside this precocious talent who had already shown more than glimpses in the WAFL last year.

Chad Warner, the Swans number 39 pick from the 2019 draft out of East Fremantle lost nothing in comparison to his teammates Gulden, McDonald or Campbell with a superb outing that included 19 disposals, eight I50s, and an incredible 11 score involvements. One to watch!

Tom Powell, the highly-rated 13th pick for the ‘Roos in the 2020 draft immediately showed his wares with a more than encouraging 19 disposals, four rebounds from the defensive fifty, and six score involvements against the powerful Port Adelaide line up.

While the premiership is what every supporter craves, the rising star is a ray of hope for the supporter of the club out of contention. Collingwood, Essendon and Adelaide loaded up in the 2020 National Draft and would love nothing more than to win the rising star nominee stakes, but an early gauntlet has been issued by the Sydney Swans who have quietly re-loaded with a bevy of young stars ready to make their mark, and in round 1 they most certainly did!