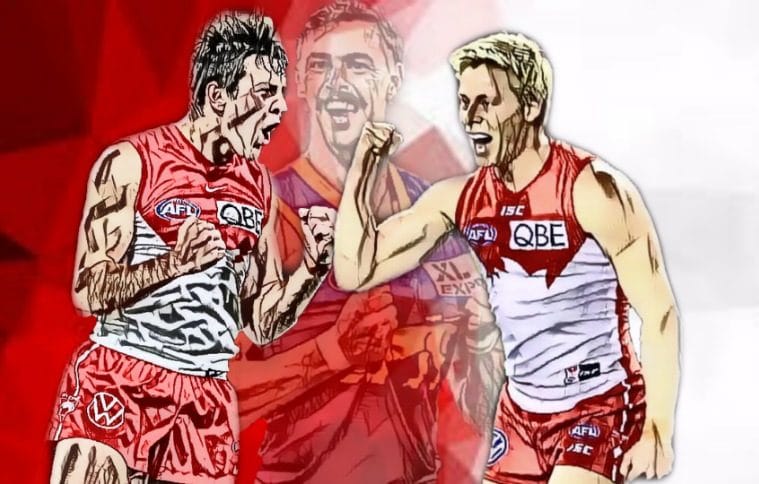 Under the bright lights of the Gabba, Round One kicked off for two clubs that, fair to say, likely have different expectations for the upcoming season.

For the Lions, they look to make amends for falling short of a Grand Final berth and come into the 2021 season as a legitimate premiership contender once again. On the opposite side of the coin, Sydney are looking to be in a rebuilding year of sorts and a lot of pundits had them as a lock to miss September action.

I believe it is safe to say that what we witnessed tonight was something very few saw coming. Changing tack from their trademark gritty style of inside football, Sydney shocked the Lions by adapting a slicker approach. The injection of pace was a welcome addition to the list that appeared to complement the seasoned campaigners to perfection.

Let’s take a look at the 31 point Swans victory.

The Swans used a complete second half domination to break open the contest, which was all tied up at halftime. In the first few minutes, it looked as though the Lions would have their way with the Swans as pre-season standout Zac Bailey had the first two goals in the game, both coming while he was attending centre bounces. His run forward set the scene for what looked like a standard Brisbane Lions stroll in the park against what was perceived as lesser competition.

However, Sydney fought back to tie the game and then used their aerial advantage down back and pure gut running to blow the Lions away in the second half. Sydney kicked 11 goals to six in the second half to put the game away and make the premiership fancies look pretty ordinary in the process.

Most of the lead up into the draft was surrounding the much-hyped prospect Logan McDonald from WA. The mobile key forward was looking like a “can’t miss” talent. In his debut game, he put young defender Jack Payne to the sword a few times with his movement and footy IQ. During stages, he had Harris Andrews for company as well and more than held his own in the one-on-one situations, taking a contested grab on the All Australian and putting the brakes on his elite intercept game.

With 11 disposals, five marks, and 3.1 for the number four draft pick had a great debut.

Despite the encouraging efforts of McDonald, Swans academy graduate, Errol Gulden stole the show. With a knack for taking the game on, and a laser of a left foot, he was a constant barometer of the Swans new crop of exciting young talent.

Taken at pick 32, he has the look of a dangerous half-forward, and he linked up well with McDonald and Heeney in particular, contributing three goals and a further three score involvements to go with 19 disposals in a great start to his career.

If Tom Papley does decide that he once again wants to switch clubs, Swans have found a player to fill that void immediately. Gulden was instrumental, particularly in the second quarter, when Sydney really started moving well.

While not as dazzling, Braedan Campbell showed a very poised and mature head, coupled with very clean disposal off half back. He looks to be set to fill the void of a fellow Swan who starred tonight that I will touch on shortly.

The combination of Joe Daniher and Eric Hipwood, on paper, appeared to be an imposing tandem with both players extremely capable of taking over a game in the air and on the ground. Their spacing didn’t look quite right tonight, and while Daniher looked dangerous in patches, some of his flaws were also on show.

Big Joe kicked 2.2 from ten disposals and only two marks. Quite often he flew and had a great purchase on aerial balls yet he was unable to drag them in. His moments of brilliance were countered by ones of head-scratching decisions that we have all seen before.

He snapped truly from range after disposing of Rampe, cleverly isolating space on his left side before gathering and kicking truly. He followed that up by retaliating after clamping a mark opposed to Rampe, swinging an elbow back, catching the Swans star in the head which not only reversed the kick but saw his number taken. A fine is likely the outcome but the result could have been much more severe had he caught him flush.

As the margin grew he seemed to lose focus quite quickly, reverting to his antagonistic tactics and dropping his work rate. He started looking for free kicks after initiating contact with opponents. I hope Chris Fagan can sort out his star forward as he may be the catalyst in the Lions reaching the next level.

As for Eric Hipwood, he was forced up the ground a lot, often caught in no man’s land as the ball bypassed him. When he had the chance to fly it was often against multiple opponents as Sydney seem to work hard to cover so well for each other in defence. The Swans entire backline put on an absolute masterclass in this one.

As previously stated, it looked early on that the Lions would run all over the top of the Swans, with Bailey opening the scoring early and forcing Callum Mills to switch off him. The Lions midfielders, led by Jarryd Lyons and Brownlow Medallist Lachie Neale, often didn’t have a lot of room to work with, and as a result, they found the going tough heading into the second half.

The unit was very solid, yet unspectacular and were often worked over by the tandem of Parker and Kennedy on the inside. McCluggage looked very clean on the outside but was often unable to get into the spaces he thrives in, though on the odd occasion he was able to cut through the middle he looked the star many think of him as.

Signs were looking bad for Sydney with James Rowbottom suffering what appeared to be a horrible knee injury, but luckily for him it only was a jolt. A slight change in angle would have meant he would be on the sidelines for months. He got strapped up and then went back into the guts and applied the clamps on Neale, slowing the prolific ball winner and halting any momentum the Lions could muster by simply beating him to the hard footy. The midfield team numbers were very even with hitouts and clearance numbers all within a margin of four, but the only difference was the Lions’ lack of run and carry from the clearances they could win.

THE JOURNEYMAN VS THE CULT HERO

Tom Hickey vs Oscar McInerney was a great match up in the air, with both rucks having 24 hitouts apiece. The Big O also contributed on the ground with 12 touches, a goal and a great defensive smother. However, the four club player in Hickey put on an absolute ground level masterclass with 23 disposals and a game-high nine clearances, most of those occurring from his trademark ruck gather. One of the most underrated ruckmen in recent memory had a great first game for the Bloods and arguably the finest for his career.

Mitch Robinson and Nick Blakey were lined up together quite often on a wing. You had the hard nut in Robbo taking on Blakey, the skilled youngster who has a reputation of somewhat of an antagonist as well. Despite being newer to the role, the young Swan took Robinson to the cleaners, using good positioning and very clean disposal when working defensively to help cover leading lanes of Hipwood.

Blakey also ran forward to kick a late goal while Robinson had zoned back deep and somehow that caused a bit of verbal response from Mitch to his teammates, though I have no idea why as he was just guarding grass at the time. Cannot blame your teammates for that.

I would have liked to have seen Robinson thrown inside the stoppages more to mix things up a bit and add some protection to Neale and Zorko. He is a hard nut and is willing to take his lumps to extract the footy – the Lions needed someone in there doing that, as the Swans were relentless in the middle.

This was the best game I’ve seen from Mills in his short career. With the academy recruit, Braedan Campbell taking his regular slot at half-back, Mills was earmarked for a new role as a midfielder. Very early on, he was switched out as his direct opponent Bailey scored the first two goals for the game (both running from the centre stoppages). Mills went to a wing before finding his way back into the stoppages.

After that iffy start, Mills kicked two goals from a game-high 29 disposals (21 uncontested) in a great showing. Hopefully, he has learnt a valuable lesson from this game and can watch his defensive stoppage work to increase his time in the guts. Special shout out as Mills hadn’t kicked a goal in two years prior to tonight.

For the first-ever “Brett Blast” I’m handing it to Eric Hipwood.

As stated, despite the spacing being wrong at times, he only contributed seven touches in the first three-quarters of football. His lone goal came with the result well and truly gone, he gave away four free kicks and had seven “clangers” from his nine overall touches. Yes, some of this can be attributed to game style, or rust with trying as he endeavours to work out a new key forward tandem, but he seemed unwilling to work high up the ground.

He has been hit-and-miss for years now, and this game was a definite miss.

The Swans as a defensive unit may be the most workmanlike in the AFL. For the past few seasons, they have been incredibly unselfish and you seldom see a player caught out defensively. They work for one another in ways that conjure up the Bloods units of the mid-2000’s!

Brisbane have something in Harry Sharp. The fleet-footed wingman is an elite runner and is unafraid to take the game on. He will be one to watch over the coming games as he becomes more accustomed to the pace of AFL.

Speaking of new faces, Chad Warner for the Swans in game number three has fit right in. Along with the aforementioned Gulden, he was instrumental in the second quarter around the midfield. He showed a clean pair of hands and great decision making.

Isaac Heeney looked like an absolute weapon across half-forward. With the interchange cap putting a hold on rotations possibly, coaches will be looking for other ways to rest midfielders. With the trend being to isolate specialist one-on-one mids in the “Dusty role” that we have seen guns like Fyfe, Petracca, Cripps and Bontempelli used in, we can now add Heeney to the list.

While not blessed with the power of the others mentioned he has an edge in the air over the vast majority of midfielders in the AFL. That superb aerial work combined with his pure talent and smarts was on full display with 13 disposals, eight marks (two contested) and 3.2 on the scoreboard.

Zac Bailey will be a great asset to the Lions’ stoppages going forward, provided he can clean up his disposal. All three of his goals were created from centre stoppages, however, he also had a game-high eight clangers and gave away five free kicks. After cutting his teeth in lesser roles, his aggression in the middle will be valuable, but it must be used wisely.

A great win by the Swans, and plenty to be excited about. Is there a better young core in the game right now?

As for the Lions… well, when you don’t bring the pressure, inevitably, the pressure finds you. And the Swans’ pressure found this Brisbane team wanting too often. There’s some work to be done for Chris Fagan.