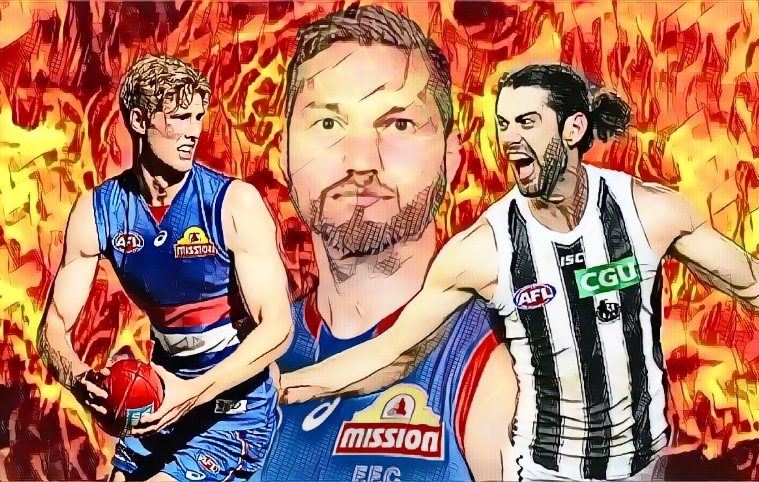 Standing Up To The Ruck Bully

The arrival of Stefan Martin at Whitten Oval will prove to be either a masterstroke, or a move a couple of years too late in coming.

At 34 years old, Martin is not a ruckman performing at his peak. Even the most optimistic Bulldogs supporter would have a hard time arguing that point, but playing the role of the bruiser to work alongside the finesse of Tim English, his presence may be the acquisition that puts the Dogs into the frame as a legitimate contender once again.

Let’s face facts – Brodie Grundy flat out bullied Tim English in 2020. I was almost going to call the police at half time of their Round One clash last year because the way Grundy was dominating the then-22-year-old was borderline abuse – in a pure football sense, at least.

English would pick up some touches late in the piece, but at half time, with Collingwood five goals up, the game was more or less over. And it was Grundy who helped the Pies establish that dominance. English’s numbers for that half? Zero kicks, zero handballs, zero marks… and seven hit outs.

Across from him, Grundy was having a party. He picked up 14 disposals, two marks and 24 hit outs in a half – some rucks would kill for those numbers across an entire four quarters.

And it was not the first time Grundy had toyed with his young opponent, absolutely whacking him in the two previous contests as well. Watching English attempting to compete against Grundy, and being so comprehensively beaten made me start to question how this would impact him psychologically. Would these types of beatings scar him? Would Grundy always have his number as a result?

Something had to be done – that much was evident.

The year prior, with Paddy Ryder, Brayden Preuss and Sam Jacobs available, amongst a couple of other big men, the Dogs opted to sit pat, and did not add to their ruck stocks. After playing Josh Dunkley as back up ruck, and almost losing him in a trade as a result, it was a mistake they simply could not repeat again.

The Dogs finished dead last in hit outs in 2020, following another dead-last finish in 2019 (and another in 2018, if we’re going to be pedantic). The fact that their midfield was able to rank tenth and 12th in 2019 and 2020 respectively, is testament to how good their on-ball contingent are without being given first use of the footy. With names like Bontempelli, Macrae, Liberatore, Dunkley, now joined by Bailey Smith and Adam Treloar, the Dogs again may not end up with a majority of hit outs, but what they will have is someone who, simply put, will not be pushed around.

The presence of Stef Martin not only alleviates the pressure on English to perform, but if the AAMI Series was anything to go by, allows the big blonde to drift forward and use his impressive overhead ability to provide a great marking option inside fifty. This is where the Dogs can really drive home their advantage.

However, to ask Stef Martin to ruck all day is a mistake. He is just as likely to break down under the strain as he is to run a complete game out at the level you’d like. It is on the switches between him and English, and the possibilities they conjure, that could allow the Dogs to get some much-needed aerial support for Aaron Naughton and, to a lesser degree, Josh Bruce. He was supposed to be providing that aerial support for Naughton, initially.

English had four shots at goal in the AAMI series clash against Melbourne, floating in to clunk marks close to goal despite the presence of Steven May and Jake Lever – two very solid defenders who usually own the space they’re in. He exploited the switches with Martin, and the Demons’ inability to cover him, leaving Max Gawn to contend with a man that could match him for strength up the field, whilst creating a sense of panic from defenders when English ran forward. I mean, if May and Lever were responsible for Naughton and Bruce, who was responsible for English? Was anyone?

He did not kick straight in that contest, but those who watched the game would have seen enough to indicate that English, with his kicking boots on, could create havoc floating inside 50. he has wonderful hands, reads the ball beautifully in flight, and despite finishing with 1.3, has a lovely kicking action.

And this is something Brodie Grundy just does not do. He is not a threat up forward, taking just four marks inside 50 last year. English took 13 in comparison.

Grundy’s strength against English gave the young Dog enormous issues, but against Martin… well, Stef isn’t the kind of guy who sits idly by allowing other rucks to bustle him out of the way. Simply put, he is built like a brick outhouse, and is just as difficult to move.

After three straight games against of having his way with the Western Bulldogs, Luke Beveridge has finally decided that party time is over for Brodie Grundy. Yes, he may still work hard enough to be the best player on the park. He may use his aerobic capacity and second efforts to once again establish himself as the premier ruck in the competition, but it will not be at the expense of the Dogs and their young star. This time, if the Collingwood ruckman is to dominate, he will have stiff opposition.

Brodie Grundy has been Tim English’s own version of a bully over the past few seasons, and the Dogs adopted the response that English would learn to deal with it and grow as a ruckman as a result, but with a team bursting with talent, their patience may have worn a little thin.

If Grundy is going to try to bully English again, he may have to deal with the footy equivalent of Tim’s big brother, and Stefan Martin – all 100 kilograms of him, is not the sort of guy you’d like to test.

I’m sure we have all been told how to handle our bullies at one point or another. If not, I am sure we’ve doled out some advice to kids of our own, or nieces/nephews. Once you put one on the bully’s chin, they rarely pick on you again.

In Round One, 2021, it is time for Tim English, Stefan Martin and the Western Bulldogs to figuratively put one on Brodie Grundy’s chin and sit him on his backside.

The time for ignoring the issue has passed. Hoping things get better just does not work. It’s time Tim English stands up and becomes the ruckman the Dogs know he can be, and if he needs Stef Martin to show him how, then so be it.

Put one on Grundy’s chin.