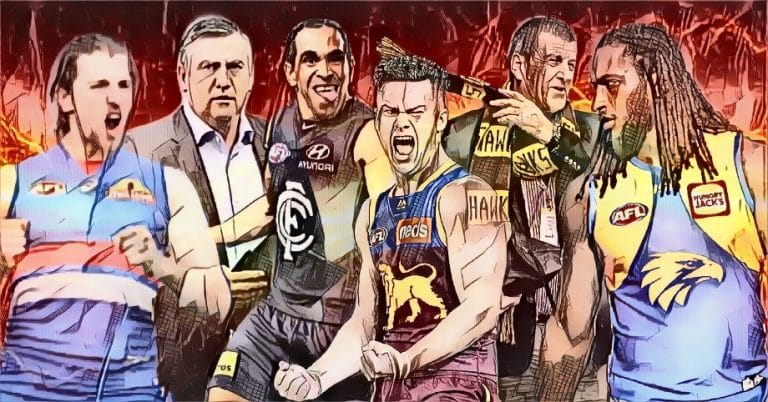 Once again, I’m going to show my age here.

When I was a kid I used to love heading down to the newsagency to grab a copy of Pro Wrestling Illustrated to check out the page that had the rankings for all the wrestling organisations and the overall top ten in the world.

Yeah, I know it was convoluted and really meant nothing in the grand scheme of things, but I loved it and I would always get a little sucked in by the “Most Popular/Most Hated” rankings every month.

It always intrigued me that the wrestling fans were so fickle. A quick turn and the bloke that was a mainstay in the most hated column could all of a sudden top the rankings in the most popular stakes the very next month.

So, you know, 30 years later I started thinking about applying that to the AFL and I released the first version below.

The AFL Most Popular/Most Hated Rankings

But it has been three months since then, and boy the landscape in the AFL has changed dramatically. Who would be the most hated personalities in the game right now? Who are the most loved? And what has caused the spike?

So, over the last few days, I’ve been gauging the amount of love or hate people involved in the game get and have updated accordingly. It’s an imperfect science, admittedly, and I’m happy for people to offer alternatives.

I should state in regard to the “Most Hated” list – this isn’t a character assassination by any stretch – I am a big believer that in a sport that thrives as much on personality as it does performance, it is much better to be talked about than not talked about at all. That rings true even if the discussion is around how much the fans despise you. I reckon many would wear the dislike as a badge of honour – it means they’re doing their job right. I know I would.

Besides, it’s based on pro-wrestling magazines that treated wrestling like it was real – it is not intended to be taken seriously.

With that in mind, here’s the second instalment of The Mongrel Punt Most Popular/Most Hated rankings. Ranking from last time appears in parenthesis

He’s got through the preseason unscathed, took a couple of hits on that bung shoulder from last season and looks ready to fulfil the potential he showed in 2020.

We all love a good news story and that’s what Matt Rowell was providing when we needed it most last season. If he continues on his merry way and elevates the Gold Coast, he won’t be able to walk down Cavill Avenue without being mobbed. Although he will probably have to go at night – poor bloke gets sunburnt just from thinking warm thoughts.

Don’t it always seem to go that you don’t know what you’ve got til it’s gone?

And now, Friday nights shall be the domain of BT and James Brayshaw. First Cometti, now Bruce. Take care, Bruce – you’ll be missed. Maybe you and Denis could do an online call of a game together, for old time’s sake at some stage?

We’ve often lamented that the game lacks characters. Heath Shaw may be about to turn that perception on its head.

Already seen infiltrating the captains’ photoshoot, Heater now teams up with his old ratpack mate, Daisy Thomas to host a Monday night footy show. I reckon he’ll be a natural.

He’s slipped from number one to number four as people start channelling Janet Jackson and asking “what have to done for me lately?”

Well, he hasn’t had the chance to do much, but the best player in the game won’t have to wait much longer to have fans salivating over his every move. Tick tock… four days remaining.

The Amazon doco will no doubt add to Betts’ popularity as he races the clock for a Round One berth.

In many ways, this year is the Eddie Betts retirement tour. Let’s hope he goes out with a bang!

He’ll be in this listing all year long. Undoubtedly.

He is the man that has made MND something everyone is aware of, and he is a fighter – we love that. To leave him out would be idiocy, even for me.

Yes, it is the sympathy vote given he just had his knee give way, and he’ll be out for the year.

This was supposed to be the season for Rayner. More midfield time, a bigger role… that was the talk. Instead, he will be spending his 2021 season recovering and rehabbing from surgery. It is a horrible blow for a young star in the making, and we wish him all the best.

How can you not love Nic Nat?

Well, I suppose you could be playing against him – you probably wouldn’t be his biggest fan. Another who has been given a boost by the Amazon documentary exposure, but it is his enormous impact on games that makes him beloved by Eagles fans.

Well, he’s been vindicated, with Collingwood copping it as a result.

You wonder what comes next? The Pies are looking to move on and “do better” but with others who he pointed the finger at remaining involved still at the club, does Lumumba continue to put the pressure on the club?

And does that keep him on this list, or see him make it onto another one? He would probably be higher on this list but for a vocal group who want him on the next list.

People have jumped on board after watching him demolish Melbourne in the AAMI series game last weekend and he has leapt into the conversation as Brownlow favourite.

I wonder if this rise in popularity wanes a little should he cop a Levi Greenwood tag in Round One and it all comes crashing back to earth. Remember where you heard it first, won’t ya?

JUST OUTSIDE THE TOP TEN

Three months later, and Ed retains the number one ranking.

An incredible effort, but I think given his absence at the moment, he may be displaced by the next time we do this.

A nice jump up the rankings as Hocking continues to play with the game like a ten-year-old boy who’s just found something exciting in his own pants to occupy himself. I wonder how long Hocking spends in the bathroom playing with the AFL.

Whilst it remains to be seen how his “stand” rule impacts the game – hey, it might be a real positive – one thing is very, very clear; AFL fans want the game left alone for a while.

Yep, the man who speaks before he thinks, yet somehow considers himself deep, has done it again, floating the idea of moving Hawthorn to Tasmania, which may have ostracised him from the only group of people who like his crap – Hawthorn supporters.

The man who instituted term limits to his football club’s presidency… and then proceeded to ignore those limits is the only reasons I’d consider not being a member at Hawthorn. He shits me.

Bucks has escaped the furore at Collingwood rather unscathed, which is quite amazing considering it seems he was central to a few of the events that led to the Heretier Lumumba complaints.

Following on from the trades of Stephenson and Treloar, Bucks has a bit of rebuilding of his reputation to do.

Been a little quiet in recent weeks – I suppose that’s what happens when you give his podcast a miss for a while and Fox Sports stop asking him what he thinks about everything.

I have no doubt he will occupy a high spot in these rankings throughout the 2021 season if he has any sort of platform to work with.

People haven’t worked him out yet and continue to hate on him for doing his job.

People, his role is to create controversy. To do this, his opinions have to be a little against the grain. They have to make you rail against him. The fact he is on this list again means he is doing his job brilliantly…

… and there are times when he is spot on, as well.

Another day, another article from Caroline recommending that North Melbourne relocate to Tasmania.

No longer a football reporter, she writes about the kind of shit that makes football less enjoyable.

The amount of feedback I got from leaving BT off the list last time was overwhelming. As such, I am ensuring he makes the list this time around.

Getting players’ names wrong, going off on a tangent, and generally rubbing people the wrong way, Taylor’s profile will actually grow now with the Friday night telecasts largely resting on his shoulders.

I used to like this bloke, but now he just seems like a snivelling little sycophant. He’s already calling for 18 minute quarters and I have vivid memories of him telling his SEN audience that AFL fans would soon forget what the ten metre goal square looked like if the AFL moved to a bigger square.

Well, we haven’t been playing games, so it’s a little bit of “out of sight, out of mind” for Razor.

Fear not, with the season looming large, I suspect he will be rocketing up the ranks by about Round Three.

JUST OUTSIDE THE TOP TEN

Nat Fyfe (on the basis of West Coast hate alone)

Once again, it actually turned out to be a lot easier to list those personalities that people seem to hate than it did to list those who are universally loved. It’s a pretty sad indictment, huh?

Anyway, if you have any you believe I missed in either column, by all means add them in the comments or on our socials. This is all in good fun – it’s inspired by pro wrestling; it’s obviously not real Anyway, I kind of like half the people listed in the hated section.