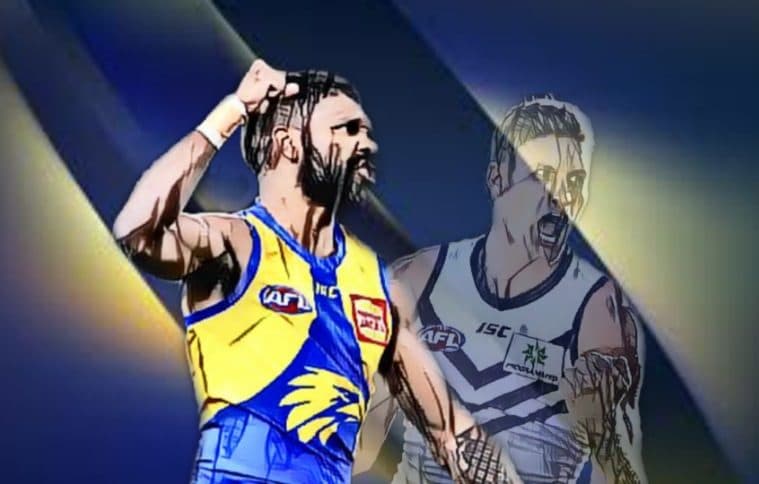 It’s always difficult to read the pre-season games. Important players make way for those on the fringe to audition, you’re never quite sure if the coach is leaving something out for Round One, no one knows exactly how much the players or coaches care about the result – or really what they’re even looking for.

So, when it comes to writing about the game, what do I write? There’s an excitement for the season to start, but it’s difficult to get excited for the game itself, knowing the result isn’t necessarily an indicator of the season to come.

This game told us a lot more about the Dockers than it did the Eagles as these losses generally do. It was a dark day for the men in purple, and it’s with those losses that we learn the most about sides. For the Eagles, it was a tough start and then business as usual. Here’s what I saw:

This rule will be spoken about all year until it eventually gets called a bad idea and gets scrapped. We didn’t have to wait long – only about halfway through the first quarter before Ethan Hughes took a small incidental step sideways and was deemed as if he’d completed an action so disadvantageous to the Eagles that they should deserve to move forward.

It probably wouldn’t have been so bad if the umpire had not paid 50s for what were previously deemed deserving: Not giving the ball back to the player quickly, and not coming back on the mark when told so.  But then no: They were simply mistakes from a rusty umpire, and probably forgivable given their insignificance. It’s the rule that’s rubbish.

FLYIN’ RYAN THE KEY FORWARD AND THE FUTURE LOOKS BRIGHT

A commentator posed the question, “how good can Oscar Allen be?” Well, we all know the answer is pretty bloody good, aside from some less than perfect kicking. He’s a reliable mark, versatile enough to be a mobile forward, ruck and even found himself competing well at full-back.

However, the Eagles need look no further for a genuine key forward than their little bloke, Liam Ryan. His first quarter saw leading and marking as good as any genuine full forward to play the game, and I thought at one stage he could go on to kick 10. Freo were missing some defenders, but then they have so many, their backline was as solid as ever (at least list-wise).

On top of his marking and leading, Ryan’s ability to get up the field and create attacking moves gets the bigger guys like Darling, Kennedy and Allen into the game should the forward line become crowded.  He’s a guy who makes things happen wherever he is (which we all know) but he played today with the kind of determination that suggest we ain’t seen nothing yet.

I also really like a few things Jamaine Jones did up forward, and Jack Petruccelle put in a good performance as well. It makes you wonder if they’ll bother bringing Willie Rioli back for any other reason other than to complete the redemption saga.

People say the forwards need to get bigger and stronger but forget that a decent lead from a mid-sized quick can have equally as big an impact – if not bigger- than a big bloke crashing a pack.

FREO’S TRANSITION IMPROVED, BUT THEIR FORWARD LINE IS STILL STAGNANT

Injured and missing most of his first year, Freo fans and the AFL community only saw glimpses of the talent that Hayden Young brings to the table off half back. His game today demonstrated that he has lost none of that talent during his extended break, and it’s no secret that he is an important key to the Dockers’ transitions out of defensive 50 and into attacking. In the first quarter, he combined with David Mundy to set up a James Aish goal, which was perhaps the purest football we’ve seen from Freo in some time.

However, for them to genuinely improve their scoring, their forward line needs to be more mobile – they need a Liam Ryan.

Matt Taberner and Rory Lobb are good contested marks, but that is not a reliable avenue towards goal; Crowden is good around the ball but doesn’t have genuine pace; and Bailey Banfield did a few good things but his skill still has some question marks. Someone needs to step up create space from them to move.

In the off-season they drafted Heath Chapman, but he needs time to learn how to be a forward. The player to stand up needs to be Lachie Shultz or Sam Sturt (who kicked three on debut before getting injured last year). They both have pace, size and the ability to be the mid-sized full forward that Freo are lacking.

The forwards are also far too reactive to the situation. On too many occasions the ball went into space, demanding the forward run and mark it… which of course allows his defender to do the same. They need to get better at demanding the footy, and giving themselves the best chance to beat their opponent.

EAGLES GOT SOME BARGAINS

He got knocked out and stretchered off, but Zac Langdon looked like he’ll be a more than solid contributor for the Eagles. Alex Witherden put in a nice enough audition to earn a Round One selection, as well. Witherden went by foot almost every time, whereas Langdon found the ball and distributed it well by hand. Both will play significant parts in the 2021 campaign.

The game started well for the men in purple, matching and beating the Eagles around the ground; however, the Eagles reminded them in the second half the importance of finding and maintaining structure. It could be that Freo were trying a few new things, or they stopped trying, or that the Eagles simply found their old structures which had perhaps gone missing in last week’s scratchy. I suspect a combination of both, but it seriously highlighted the continued issues Fremantle have at moving the ball past a structured defence and how easy they are to score against on the turnover. Same old Eagles crowd, too. Booing Fyfe in a practice match because of an accidental head clash? C’mon guys.

The Eagles have such a strong and trustworthy game plan that it doesn’t really matter who’s starting on the field; their system works, and they know it. The younger Dockers are still learning their system, still working out how to perfect it, and it’s a long way to go before they can trust it with the same level of reliability.

Since 2010, Fremantle have had the most consistently poor injury list in the AFL, with no fewer than four players on their list at any one time, and at some stages, as many as 18 on it.  They sacked their strength and conditioning chief last year, and hired the guy from Melbourne, in an effort to solve this issue.

Well, it hasn’t helped keeping them on the park: Sean Darcy fell victim to saying he was as fit and healthy as he’d ever been (got injured the next day), and today Rory Lobb hurt his knee in the first quarter, Michael Walters did a hammy late in the third, and Bailey Banfield rolled an ankle.

Injures happen of course, so their challenge now is to keep these (hopefully) short-term injures as just that, and not watch them become four, five, or six weeks, then TBA, then the season. Because that’s been a frustrating pattern that hopefully ended with the year 2020.

BLESSED ARE THE MEEK

A couple of weeks ago, I listened as an award-winning Western Australian sports broadcaster lamented Freo’s ruck drama. Darcy had injury concerns, Lobb didn’t like rucking and Meek, who had been on the list for a few years, but hadn’t yet played, had just been beaten comfortably by 200+ game, four-time all Australian, Aaron Sandilands in an intra-club scratchy. It was the kind of alarmist reporting that made me think that this Meek guy will go okay.

Today he competed against another All-Australian ruckman in Nic Naitanui, and particularly early in the game, he showed no sign of being an easy beat. A big man, he looks more mobile than Darcy and backed his skills well. On a pretty drab day for the Dockers, they’ve found themselves a back up ruck who can match it with the best- at least in a practice match. We’ll get a better gauge when he meets Gawn in Round One.

The Eagles went through the motions in this game and won it comfortably. We know what to expect from them – they’ve played the game, won it, and look like they could go back again. They’re a team who knows their game but aren’t arrogant enough not to find improvements along the way, if only subtle ones. They put the cue in the rack pretty firmly at the end, allowing some junk time goals – the final margin of ten points told a faux story to the comfort in which they played the second half.

Freo had a pretty dark day and if this was going to be a good chance to win some undecided members over, then they did a pretty crappy job of it.  Unlike the Eagles, they’re a young side who are learning their game, were missing a few key players (which is more important to them than the Eagles who easily replace their outs). Taberner played with a lot of rust in his first hit out, and although they weren’t blown away, they just couldn’t match it against the best. It’s not all doom and gloom, of course. They’re still an improving – and an improved side with an exciting list. But any hype one may have about a meteoric rise to the top should be tempered for at least another season.