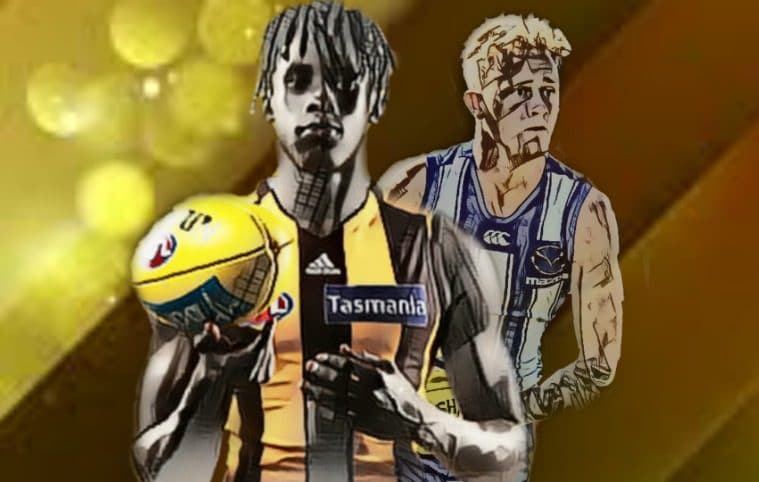 The AAMI preseason clash between Nth Melbourne and Hawthorn unveiled a few interesting points that may give some insight to what to expect in 2021 from these two teams who many (mongrels included) believe will be fighting for the number one pick in the draft.

Hawthorn managed to kick away in the second half to record a 39-point victory but the reality is that the result could have been much different due to some average finishing and poor field kicking, with both sides routinely missing 20-30m chip passes, particularly when switching back into the corridor. However, quite often these lapses in play were left unpunished.

He was simply sensational across Centre Half Back for Hawthorn, routinely chopping off aerial attacks (seven marks and 24 disposals) but his composure and pace were also dynamic features that allowed Big Boy Ben McEvoy to spend some more time in the ruck. His rebounding ability also makes up for the loss of James Sicily. If I could change my breakout player nomination right now (from Paddy Dow) it would be “CJ” that I believe will flourish in 2021.

I don’t know Hawthorn manage to do it but they have had great success with finding diamonds. Just when you think the era might be over in steps another youngster to carry the torch. A pair of players yet to make their mark on the AFL look locked into the round one side.

Jacob Koschitzke and Tyler Brockman looked like they absolutely belong and have been running around for years. Booting nine goals between them ( six and three respectively) they caused headaches all day for North and created some exciting passages of footy that will get some swelling into the heads of Hawks fans everywhere. ”Kosi” showed a clean set of hands and great mobility in the absence of Mitchell Lewis and Jack Gunston. Working well with the guy who he might have overtaken for a round one spot, in Tim “Almost” O’Brien. Brockman looks to be a great replacement for Puopolo with his forward pressure and exciting pace a willing addition to the Hawthorn side. Throw these two in with the likes of Gunston and Wingard they can cause some issues for opposition defences.

While it’s only the preseason, it looks like the Roos defence needs some reshuffling. I understand the run and carry Jack Ziebell gave them off half back, but it was completely negated by his average disposal and lack of defensive awareness. In fairness, this a completely different game than he is used to playing as a forward or midfielder. Twice he got caught out by his direct opponent flying into a pack, and he looked unsure whether to attack the high ball or stay down. One of his trademarks has been his almost kamikaze attack on the footy, but a large amount of those contests had involved him going to ground, which as a defender, you simply should not do if you’re just looking to win the ball.

Aiden Corr was unfortunately given an absolute pasting by Kosi, and while he got to the right spots at times it almost looked like he didn’t respect his opponent.

The North defence looked undermanned without two of their mainstays (who I will touch on soon) and it is likely Corr won’t be forced to play on the main forwards when Robbie Tarrant returns. For Corr’s sake, let’s hope it’s sooner rather than later.

Luke Davies-Uniacke looked like an absolute monster in the middle for North, routinely breaking tackles and using his long, direct kicking to drive the ball deep forward to give the Roos a shot. He looked to take command with Ziebell down back and fellow bull, Ben Cunnington sidelined with the effects of a concussion. 21 disposals, six clearances, and five inside 50s for the up-and-coming midfielder. With great power comes great responsibility.

Another great game for a guy that always appears to fly under the radar. With O’Meara and Mitchell missing from the game, Shiels took his own footy with him for the day. He accumulated possessions at will and nobody from the Roos seemed to be accountable for him through the middle. Game high 33-disposals and six clearances for the veteran Hawk.

Dom Tyson had a very solid game for North with three goals from 23 disposals. He has been dogged by injury and form problems since coming across from Melbourne, but hopefully he can stay on the park in 2021. I was honestly surprised he accumulated so much footy in the contest as quite often I did see him as ineffective.

I loved the way Josh Walker went about it today. He has a mature body that is strong and can provide a contest, and is exactly what the Roos need up forward to replace Brown. Hopefully, their backline can hold out without him.

The acquisition of Tom Phillips looks to have paid off for the Hawks, as his run and carry out wide will be absolutely vital as a like-for-like replacement for Isaac Smith. 30 touches and 550m gained for the new recruit is a fantastic return for his first official hit out.

Jaidyn Stephenson and Tarryn Thomas will be vital contributors to North up the ground in 20921. Thomas, in particular, looked extremely composed and although his disposal let him down at times, his reading of the play and footy IQ more than made up for it. The pace of Stephenson was noticeable but he may not get to play the isolated forward role he thrived in at Collingwood. Ultimately though he could become a much more important player because of this as he works further up the ground and provides run through the middle.

Hopefully, Harry Morrison can work his way into the full midfield rotation as he looked very clean, composed, and dangerous. He adds both an attacking and defensive aspect to the midfield.

Nick Larkey appears to be ready to take the next step in his development. His second efforts were outstanding and coupled with his movement around the forward line, he will be a focal point sooner rather than later.

On a final note, just a reminder for David King that the AFL times are back to regular quarter length therefore expect longer games… it’s not a new thing – it is just returning to the length of game we had before it was reduced for a reason. It seems a lot of AFL commentators are already lamenting the fact they have to work an extra five minutes per quarter.