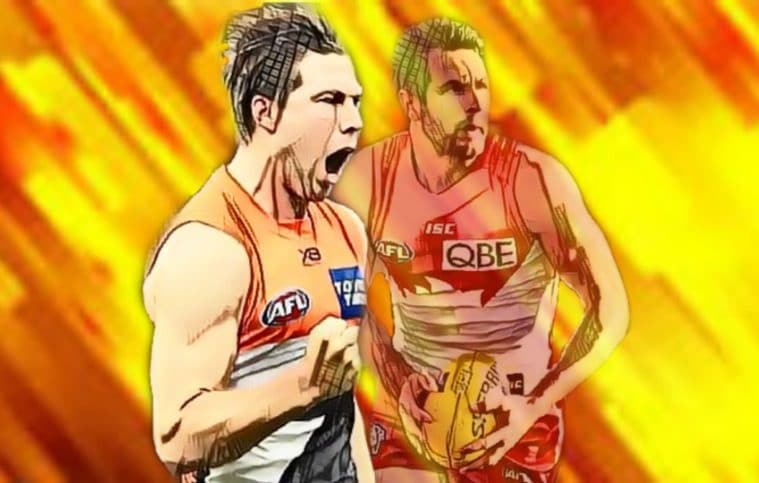 Sydney vs GWS provided a great see-sawing contest where we learned that both sides will go into 2021 with plenty of promise, despite the general consensus being that the sides will likely feature on opposite ends of the ladder. Perhaps the gap won’t be as large as people say

GWS got on top of their cross-town rival 18.6 (114) to 12.14 (86) in a contest that could have been much closer had Sydney taken full advantage of their scoring opportunities.

In saying that, the Giants were without some fire-power with Lachie Whitfield, Phil Davis and new recruit, Jesse Hogan all absent. This, coupled with the off-season departures of Zac Willams, Aidan Corr, Jackson Hately, Jye Caldwell, Heath Shaw and gun forward, Jeremy Camero,n many expected the Giants to be struggling to find cover. On the contrary, their side looked more dangerous and well-rounded without those big names, with the cohesion evident early. Hopefully, that carries through to the late stages of 2021.

For the Swans, despite not grabbing the win and fading during the game in patches there are some extremely positive signs to take out of today, as well.

The Giants forward line will cause headaches in 2021 due to their extremely unselfish nature.  The way they work for one another is extremely impressive and they are all capable of bobbing up and kicking goals when their opportunity comes around. With Jeremy Finlayson, Harry Himmelberg and Jake Riccardi, they can shift matchups around to their liking and due to their mobility they will make any team accountable that like to fly a third tall up in contests.

For me, Himmelberg, in particular, is one of the most underrated forwards in the competition. With the Giants not having Cameron there, he will be more than capable of taking the next step in his career as he does a lot of things well. His footy IQ arguably the most dangerous aspect of his game and his early battles against Tom McCartin provided a wonderful back-and-forth contest.

Adding to the mobile tall forwards, the Giants have also unearthed pick 12 Tanner Bruhn, who looks like a perfect fit alongside the star that is Toby Greene. The Giants were able to pull off a coup in nabbing him, as the experts had him getting to Essendon just inside the top 10.

Bruhn had a bit of an injury history but is no doubt a very classy player and he will capitalise on any space afforded to him by the close attention often paid to Greene. Seven combined goals between the pair swung the match towards the Giants.  If Bruhn is given a shot in the best 22 it will also allow Greene to pinch hit through the midfield at times.

GWS have added yet another quality string to their bow in what is seemingly a never-ending procession of excellent young players breaking into their side.

Sydney desperately needed to add some wheels into their midfield to aid Luke Parker and Josh Kennedy on the inside. Callum Mills and Isaac Heeney ran through there and it seemed to work at times, adding to their ability to damage opponents after the clearances. Ultimately, Heeney in particular, needs to be settled in one spot as he is too much of a utility. His ball use and IQ would be most effective off half back, to help cover the loss of Allir.

Braeden Campbell and Ollie Florent may be the keys here as they can take the pressure off the aging legs of warrior Kennedy. The addition of Tom Hickey could be one of the bargains of the off-season as he looked extremely assured in the ruck and his clearance work often goes unnoticed, particularly in heavy conditions.

GWS arguably have the most well-rounded midfield in the competition with an exciting combination of pace, ability and toughness.

Jacob Hopper looks to be ready to take the next step as he looks fitter then he had ever been. He tortured the Swans on the inside with 25 disposals and eight clearances. Tom Green showed very clean hands and linked up well with Tim Taranto, Josh Kelly and Stephen Coniglio while De Boer was (as always) making life very difficult for the opposition, drifting around as a half back for a lot of the contest.

I was also very impressed with Kieran Briggs in the middle. With Brayden Preuss out for an extended period, it’s well and truly his time to grab the number one ruck spot. This midfield group will be absolutely devastating over the next five years as they continue to add class and grunt to an already fearsome mix.

I knew Logan McDonald would cause headaches with his aerial work, but his hands were damn solid.

The number two draft pick looked in great command after coming on in the second half, attacking the football with pace and swinging the momentum quickly. One passage of play where he crashed a pack and took a contested mark on the lead at speed was particularly impressive. Congratulations Sydney, you have a beauty. Pencil him in for round one.

Jack Buckley looks like a solid developmental player who could play in round one as well. I was super impressed by the way he covered the ground, dropping back behind the footy to indicate he had a very solid understanding of the game and knew exactly where to position himself to impact the game a little more than I expected.

Both sides have an impressive array of intercept defenders. Tom McCartin and Jordan Dawson for Sydney look to be an extremely solid pairing with Dane Rampe and  Heeney. If their potential star finds his way back down there, the departure of Allir will not be as noticeable as first thought . For GWS, I loved the game of Sam Reid in particular but the reality is their whole backline is really able to cover a large demographic of forwards. Just like the forward line, they are excellent with their structures,  positioning and willingness to cover for each other.

Chad Warner looks like he can be a solid piece in the Sydney rotation. He was very impressive and seemed to handle the challenge very well for a player that had made only two appearances so far in his career. Definitely earned a spot for Round One.

It was no coincidence that the Sydney run coincided with the absence of Sam Taylor, who returned to the GWS side after missing a heap of time due to a bacterial infection (ouch!). He was huge in the first half, mirroring the defensive efforts of Tom McCartin at the other end, and will provide GWS with a huge defensive boost this season. Great to see him back.

I didnt know what to make of the trial of Blakey across half back and the wing. If he is stationed there in general play he could be a very solid defensive option, almost playing like a ruck would behind the ball, but he might run into matchup problems if teams can make him accountable. You can’t fault Longmire for giving it a go to see how it works situationally as Blakey almost seems lost at times playing high half forward, where he often found himself last season.

The one thing that was good to see is that the Swans still work extremely hard through their contests. While they may struggle at times in 2021, you always know they will never allow themselves to be completely out of a contest. Whether it was the older players or the high draftees, you could see they all buy into the same gameplan and philosophy, which is all you can really ask for.

One would think that after dropping five goals behind, some of the Swans may have dropped their heads, but the response was impressive and typical of the culture Sydney has fostered.

As for the Giants, their penchant for stopping to a walk when their opposition raises the heat levels reared its ugly head again in this one, with the ball movement becoming stagnant in the third quarter when the Swans kicked into another gear.

What looked like it could have been a blowout for the Giants turned into a very entertaining game, with young stars and established guns showing there is plenty to look forward to for both Sydney teams in 2021.