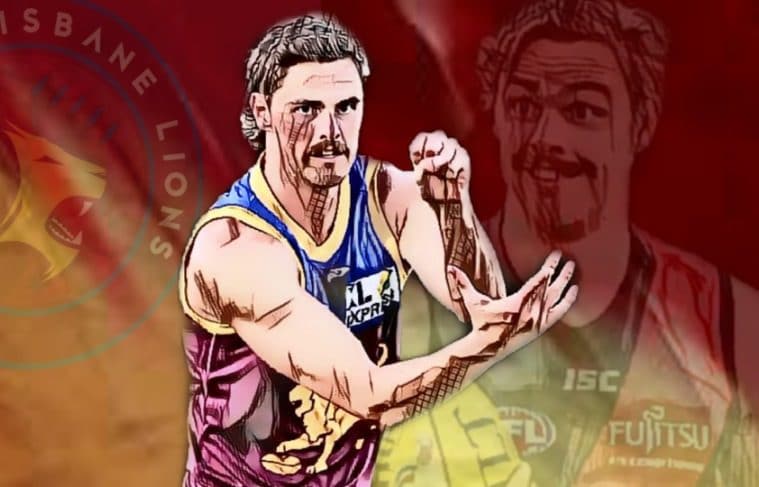 On The Fence About Joe

Some have called it a recruiting coup, whilst others see it as a gamble on the player’s health, but there can be no question that the Brisbane Lions have made the biggest move of the off-season in acquiring the talents of former Bomber, Joe Daniher.

The mustachioed forward heads to the Lions coming off three miserable seasons for Essendon where he managed a combined 15 games, with an ongoing groin issue proving too much to overcome.

The first real signs of trouble at Tullamarine came after the 2019 season, when the contracted Daniher requested a trade to Sydney, where his mentor, Tom Harley sits as Chief Executive Officer. Whilst the Bombers and Swans could not get a deal done, perhaps impacting the potential move of Tom Papley to the Blues as a result, Daniher’s love affair with the Harbour City seemed to fizzle throughout 2020, with Brisbane becoming his destination of choice.

But what are the Lions getting in Joe Daniher?

If his first pre-season game is anything to go on, Daniher looks fit and ready to start the season with a bang in 2021. Four goals against the Gold Coast Suns in last weekend’s practice match should be enough for the Brisbane hierarchy to start exchanging some nervous smiles. Could he be the piece to the puzzle the team has been missing over the past couple of seasons?

A fully fit Daniher would be the answer to the ailments of many teams, but Brisbane are one side that have been screaming out for someone to stand up when it counts in the forward line.

And that would be because their current forwards seem to step aside when the heat is applied.

Eric Hipwood is now 23 and starting to add strength and an overhead marking component to the physique that can, at times, make him look like a leaping gazelle, or a baby giraffe depending on the circumstance. Though he had moments in 2020, his final outing of the season saw him virtually non-existent.

With just five touches against Geelong, Hipwood’s non-performance was a huge factor in the Lions going down and missing out on possibly their only ever chance at a home Grand Final.

However, his five disposals look like a Dustin Martin-esque finals performance when compared to the output of fellow key forward, Daniel McStay.

McStay was so poor in the 2020 finals series that some believe it was his disastrous play that pushed the Lions into going after Daniher. In the Preliminary Final, McStay barely troubled the statisticians, collecting three disposals, amazingly matching his abysmal return from the Qualifying Final win against Richmond. Whilst the Lions were able to vanquish the Tigers in the first week of finals, ending a huge losing streak against the reigning and future premiers, little of the credit should go the way of McStay. His finals averages for 2020 look like the numbers of a player with stage-fright.

Three disposals, two marks and half a goal per game – that’s what McStay managed to offer the Lions.

Things were compounded when Charlie Cameron had a dirty day in the Prelim as well – his two goals wallpapering over a game where he was hardly involved, notching just five touches. And then there was Cam Rayner, whose finals averages in 2020 were marginally better. He averaged a goal per game whilst collecting 5.5 touches.

So, amongst the four players listed – the backbone of the Brisbane forward line – the Lions were able to get an average of 24.5 touches, nine marks and 4.5 goals per game. If we break that down a bit further, the average output for each in that foursome amounts to 6.1 disposals, 2.2 marks and 1.12 goals per game each. You’re not going to win a Grand Final with numbers like that from your gun forwards. In short, they let the team down.

So, it seems like a fait-accompli that Daniher’s recruitment will improve that group significantly, right? Well, maybe yes, and maybe no.

You see, prior to the 2018 season, Daniher’s trajectory threatened to catapult him to the position of best tall forward in the game. He had made the leap from 43 goals in 2016 to top 65 goals in 2017. The optimists amongst us started wondering whether the Bombers may have the next big thing in terms of power forwards, with a 100-goal season seemingly on the table if another season of improvement happened by in 2018. At 22, the world seemed to be his oyster, but like most men at some stage of their lives, his groin led to problems.

Brendon Goddard was quite scathing in his comments about Daniher’s work ethic and attention to detail in regard to his initial rehabilitation from the injury.

“As much as the injuries affected him, I think he could have gone about it in a better way with his rehab, particularly the first time around (last year).

“He may still have been in this situation … but at the time I didn’t think he dedicated himself hard enough to recovering and rehab and give himself the best chance to get up and play.”- Goddard on RSN927 in 2019.

Whether or not a dedicated commitment to a rehabilitation program could have avoided some of the ongoing problems is unclear, but the fact that a former teammate was so willing to address Joe’s lack of discipline in regard to getting himself right has to be a worry. Daniher simply could not overcome the injury.

However, let’s assume that Daniher has learnt a valuable lesson over the past three years. Let’s assume that he realises that his time in the game is short, and days away from turning 27 years old, it is now or never for him. Finally, let’s assume that he is completely happy playing with the Lions and being part of a winning culture. Is this enough to light a fire under the big man to fulfil the potential he showed in his early twenties before he was injured? Or will we see a version of Joe Daniher that goes and sits on the boundary fence as a teammate has a set shot for goal?

Yes, it was funny, I suppose – a professional athlete plonking himself down on the perimeter as a teammate kicks for goal, but what do actions like that say about Daniher as a competitor? That he is an individual? That he dances to the beat of his own drum? That he does indeed lack discipline?

The Brisbane Lions are on the cusp of something special. They have an age profile that just screams success for at least the next few years. They have arguably the best tall defender, and the most complete midfielder in the game – what they needed was a full forward who doesn’t shrink in big moments and has the capacity to stand up in big moments. In Daniher, it is quite possible that they have found it.

He is a Crichton Medallist and All-Australian. He has won an Anzac Medal, which is just about the biggest Melbourne-based game of the home and away season, often played in front of crowds of over 90,000. Even as late as 2019, it was his enthralling matchup against Darcy Moore that started to draw comparisons to the great Knights v Vander Haar contests of the late 1970s. He is a match-winner, a game-changer and ultimately, he could be the gamble that pays huge dividends for Brisbane when it matters most.

However, there is a long way to go until Joe gets to prove his worth on the big stage.

The Lions will need their star recruit healthy and happy for most of the 2021 season. They will need to see, not just flashes of brilliance, or the promise of something big, but the consistency that great players develop. Brisbane will still generate production from the likes of Rayner, Cameron and Hipwood, but it will be the presence of Daniher leading, climbing, marking and converting that makes their jobs just that little bit easier to do.

Is Daniher the answer? Can he be the professional Brisbane need him to be?

Like Daniher in 2020, I’m sitting on the fence in regard to whether this is the move that puts the Lions over the top, or puts them right back where they started. If 2021 is the season of Joe Daniher, then 2021 could very well be the season of the Brisbane Lions.