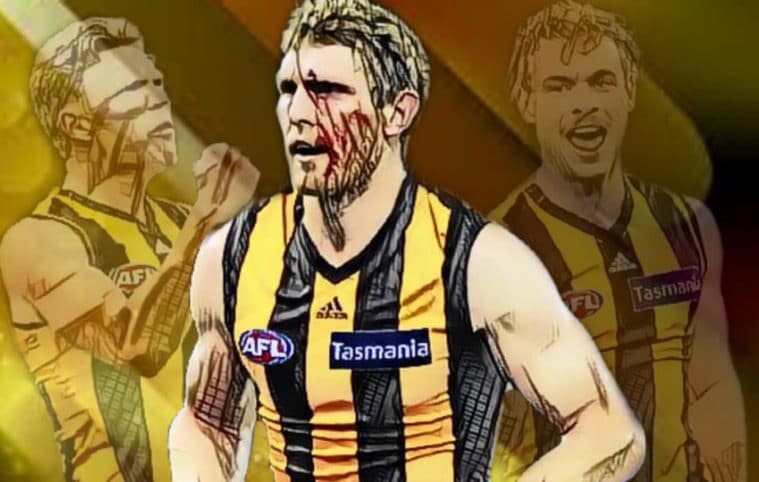 And so, on that note, we turn our attention to the Hawthorn Football Club, who today appointed their newest captain, Ben McEvoy. The 31-year-old is, to put it bluntly, a transitional captain. In fact, his selection in the role concerns me on a couple of fronts.

With the club feeling the pinch after a couple of ordinary seasons and their plans to revitalize the list by recruiting mature-aged players falling in a heap, the time to invest in a young player and give him the opportunity to grow in the role would seemingly be right now. Instead, the Hawks have opted to band-aid over things and have a bloke on the wrong side of thirty step into the leadership role.

What’s behind it? Let’s explore.

Jaeger O’Meara is 26 years old and was the choice of many to lead the club into the next era. Tom Mitchell is 27, Jack Gunston is now 29, as is Liam Shiels – one who has embodied the selflessness of a captain for quite a few years. Those were the names bandied around by many supporters as the Hawks took their sweet time appointing their 2021 on-field leader.

The announcement of McEvoy’s ascension to the captaincy came as a relative surprise.

And he wasted no time attempting to restore the faith.

“The entire playing group is intent on making amends for our disappointing 2020 campaign and this has been reflected in the energy and intensity on the training track,” said McEvoy as part of the announcement.

You’d want to hope so, particularly given the distinct lack of energy and intensity the team demonstrated throughout last season.

Whilst he said the right things, I wouldn’t mind being a body language expert to assess just how much he believed them. With Jonathon Patton in trouble and Tom Scully taking time away from the club to deal with personal issues, the Hawks are not exactly presenting as a team that has the entire playing group intent on making amends, are they? That’s at least two players who are a fair distance from being at that level.

Of course, saying the right things is all part and parcel of leadership, whether you genuinely believe them or not. In that case, McEvoy has already ticked one box.

However, questions arose immediately as to why the Hawks had not handed the reins over to Jaeger O’Meara or Tom Mitchell? Why is Gunston, two years McEvoy’s junior, not being given the chance to get three or four years of captaincy under his belt before he contemplates retirement? Why have the Hawks opted for a player who could be finished in just a couple of years’ time as the best man for the job of leading them through this period?

Looking further at the list, we see names like James Sicily as a likely leader, but his ACL injury may have been the issue to prompt this stop-gap measure until he comes back and gets a season under his belt. Other potential leaders are 23-year-old Blake Hardwick and 22-year-old James Worpel.

And it is in that last name that we find the light at the end of the leadership tunnel.

It is Worpel that many Hawks fans have earmarked as the leader in the making. However, at 22, may not be ready quite yet. Could a two-year stint from McEvoy be the time required for Worpel to prepare himself for the role?

Worpel had a breakout 2019 in the absence of the injured Tom Mitchell. His Peter Crimmins Medal win was just reward for a young man that jumped over several more seasoned performers to become the number one midfielder at the club. He went past Shiels and O’Meara, both of whom were supposed to pick up the Mitchell slack. However, it was Worpel who stood up.

With Mitchell back in 2020, Worpel appeared a little lost. His role in the midfield changed and he went from being the number one man, back to second and occasionally third in the rotation. I have to wonder whether it shook his confidence just enough for the Hawk honchos to waver on whether the 22-year-old was ready for the captaincy, instead opting for McEvoy until Worpel had more time to settle? It seems logical.

McEvoy is big enough and ugly enough to take the heat as the Hawks steer their way through some rough seas on the horizon. By the time they come out into clear seas, the decision about who assumes leadership heading into a more successful era should be an easy one. Injuries aside, Worpel and Sicily will be two names at or near the top of the list when that occurs. The decision to place the current burden on some big shoulders, with McEvoy taking the role, could be seen as a wise one after all. With a seasoned veteran carrying the weight of leadership on a struggling team through the next year or two, perhaps this questionable decision to place their faith in McEvoy will be entirely justified.

The Big Boy has a big job ahead of him over the next couple of seasons, but as he has so many times in the past, he will put his head over the footy and take not a backward step when the heat is on. In the eyes of many, he may not be Mr Right in terms of the Hawthorn captaincy, but he could be Mr Right-Now.

And he’ll hold down the fort until Mr Right is good and ready.