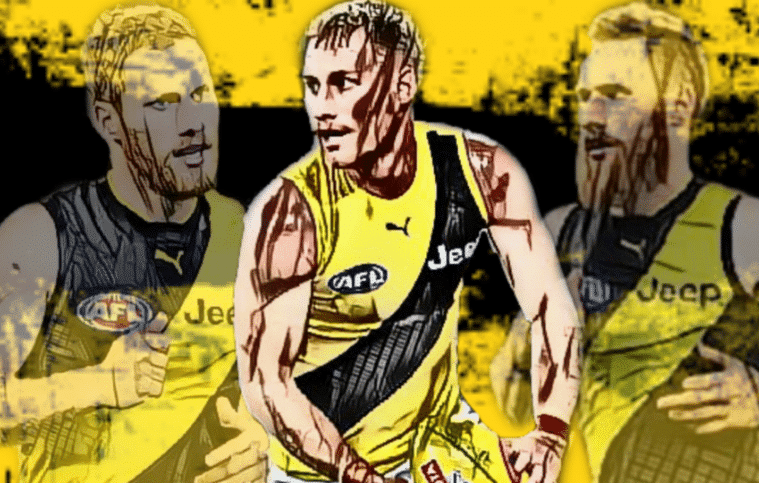 The Red Menace Of Punt Road

As footy supporters, it is natural for our focus to gravitate to the stars of the game. They command our time and attention, they generate the clicks that websites and advertisers desire and they add an element of excitement to the game we love.

But there are layers of stardom, and some players may not be held in as high regard externally as they are within their own clubs.

When all is said and done there is a chance that Nick Vlastuin will end his AFL career with no All-Australian selections and no Best and Fairest awards at the Tigers. There is a chance he will not see his name in record books and he won’t be hailed as one of the best half-back flankers of his generation.

People tend to look back at awards and accolades to assess how good a player was and what impact they had on the competition, but in a team that prides itself on the value of the whole being worth more than the sum of its parts, those people should not use that to assess the standing of Nick Vlastuin at Richmond.

It hardly seems fair that a player who is so important to the success of this Richmond team will be remembered as, as Jack Dyer would term him, “a good, ordinary player” in the grand scheme of things. Yes, there will be three, and possibly more premiership medals that indicate his worth, but as an older fella now… or oldish, I cringe when I hear a younger reader dismiss the achievements of a player they have not seen perform. Without the awards, it seems as though players are too quickly dismissed.

Vlastuin is anything but a player that fits the famous description by Jack Dyer. He may have watched on as Tom Stewart, Bachar Houli and Shannon Hurn have slotted into the half-back flank role in the AFL’s team of the year, but in terms of importance to the structure of a side, none are more valuable than the red menace of Punt Road.

We only have to cast our minds back to the last official game played under the AFL banner. Vlastuin found himself knocked senseless by a charging Patrick Dangerfield in a marking contest (a similar action got Jeremy Cameron five weeks in 2018 when he connected with Harris Andrews in a marking contest). Dangerfield’s forearm connected with the chin of the Tiger and he collapsed to the turf as a result. Vlastuin was ruled out for the remainder of the game and the Richmond defence went into survival mode. It would take until the half time break for the Tigers to settle and for Damien Hardwick to restructure the defence to suitably compensate for such a devastating loss.

Vlastuin is no stranger to putting his body on the line. In 2017 – as part of Richmond’s first flag in 37 years, Vlastuin backed into the path of an oncoming Taylor Walker in the second quarter. With hands stretched above his head, leaving himself wide open, Vlastuin stood his ground and took the mark. It could have been reminiscent of Gary Ablett cannoning into the exposed ribs of Robert Dipierdomenico in 1989 had Walker made him pay. But Walker didn’t make him pay and missed the opportunity to make a statement.

It would be the last real opportunity Tex has had to make a significant impact on an important contest. And it set the tone for the rest of the game. The Tigers were willing to take the heat – the Crows were unable to apply it.

Richmond rebounded and soon goaled, opening up a break on the Crows. The rest is history.

Is there a player that reads the flow of play better than Vlastuin? In a team that has such designated and defined roles, he has been so good that opposition teams have recently attempted to play a defensive forward on him. Former North Melbourne coach, Rhyce Shaw, sent Jasper Pittard to curtail him in 2020.

Shaw is now gone from the Kangaroos and so is Pittard. That about sums up how successful that tactic was.

2020 saw Vlastuin make his first-ever All-Australian squad of 40 as he once again controlled the back half for the Tigers. Surrounded by quality in Dylan Grimes, Bachar Houli and newly-crowned Jack Dyer Medallist, Jayden Short, the Tigers were able to nurture the next generation of defenders in Noah Balta and Liam Baker, the latter of whom may eventually move into the midfield. For his part, Vlastuin casually raked up the highest number of intercepts in the competition (including finals) whilst receiving little to no fanfare from those outside the club. It seems to be his way. This, on the heels of finishing fourth in 2019 and eighth in 2018.

As we head into the 2021 season, there are those starting to float theories as to why Richmond cannot register a historic three-peat and clock up their fourth flag in five seasons. The list is getting older – yes, that is no lie. No team stays up for that long – right, that could be true as well. Until they do. Teams will work the Tigers out, right? How’s that theory gone so far.

Nick Vlastuin is 26 years old. Those proclaiming the end is nigh for this group of Tigers obviously has not done their research. There are plenty of players in their prime right now, and Vlastuin joins names like Lynch, Caddy, Broad, McIntosh, Nankervis, Short and Castagna in the 24-28-year-old “win now” group. Beneath them, players like Rioli, Baker, Graham, Bolton, Balta and the troubled Sydney Stack round out a list that is not going to fall away in the next couple of seasons. Yes, the output from Edwards, Cotchin and Houli may decrease a little, but the slack can well and truly be picked up.

Vlastuin may be without an All-Australian selection at this point in his career, but there is little question that he is amongst the best defenders in the game. I ask you – would you prefer Vlastuin in your defence, or Brad Sheppard? Vlastuin or Darcy Byrne-Jones? Vlastuin or Nick Haynes?

With all due respect to the players named – all AA-calibre players and all with an AA-blazer hanging somewhere in their home, you’d be hard-pressed to select any of them over Richmond’s red menace.

Vlastuin may indeed end a Tiger without an All-Australian blazer. He may end up going through his entire career without a Jack Dyer Medal hanging from his neck. In hindsight, his achievements may pale in comparison to the exploits of Dustin Martin’s Norm Smith Medals, Cotchin’s captaincy or Riewoldt’s Coleman Medals, but the value of Vlastuin to Richmond will come in moments and our memories of them. It will be immortalized in him standing under the footy as the Adelaide captain closed in on him. It will live in moments where he put his body on the line and crashed to the deck on the end of a Patrick Dangerfield forearm.

And it will live in his next selfless act that makes the Tigers just that little bit better.

It probably won’t win him an AA berth or a Jack Dyer Medal, but it may aid the Tigers in picking up a fourth premiership, and in doing so would cement Nick Vlastuin as one of Richmond’s all-time greats. The individual awards can go to someone else.