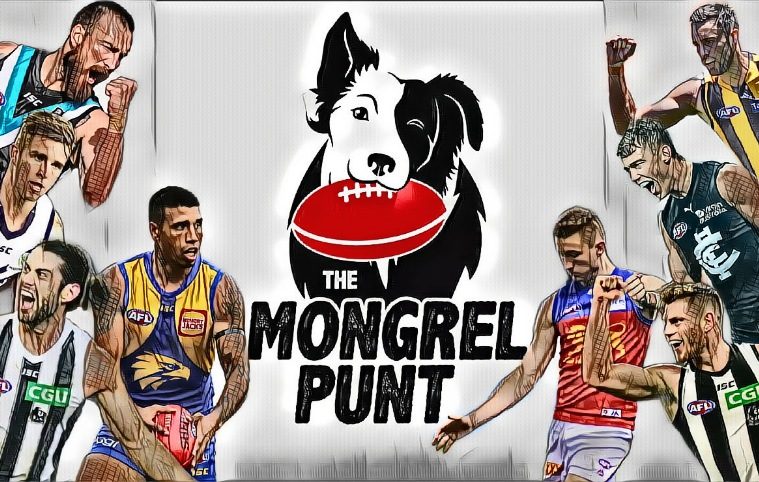 We’re about to hit the top twenty in The Mongrel 50 pre-season edition, and with plenty of heavy hitters still to come, how they played in 2020 becomes more important.

We’ve been doing this for three years and the goal is to reward the players playing their best right now whilst respecting the body of work over the last three seasons. With that in mind, let’s jump back in.

A career-best season for the big bloke after doing a mountain of work in the off-season to hit 2020 in fantastic shape. Dixon became one of the most feared forward threats in the competition – a testament to what an off-season of hard work can do.

He finished third in the league in goals scored and picked up an AA selection for his troubles, but it was his four games in which he took 5+ contested grabs that caught the eye of this old Mongrel. He was a complete powerhouse against the Eagles and Blues as he monstered the defence to take grab after grab.

The premiership window is open for the Power right now and with Dixon playing the same kind of football in 2021 that he did last season, we could see his form dictate just how far Port can go.

A brilliant 2020 season saw Nic Naitanui re-establish himself as the most dominant ruckman in the league.

Oh, and here come those looking to throw out the names of Grundy and Gawn… yes, if we’re looking at the last three years, those two have it over the big Eagle, but in terms of 2020 alone, Naitanui was the man. He moved packs with the sheer force of will, gave his midfield silver service, and controlled the clearances himself against rucks that were not up to the level.

If you’re looking for a snippet of how good Naitanui was in 2020, go back and cast your eyes over his last quarter against St Kilda in Round 17. He carried West Coast home that day with one of the most impressive quarters of footy you’re ever likely to see from a big man. The Eagles were headed in the final quarter as the Saints looked set to storm home, but Naitanui refused to let his team go quietly into the night.

He powered that team home on that occasion and silenced any who still doubted how much he can influence a game.

Of course, you can count me amongst the many that would love to see him play more game time, but with what he is producing in the time he is on the park, it is difficult to fault his output.

I was surprised by his rating so highly, but upon closer inspection, an All-Australian squad selection and best and fairest award in 2020 cap off an excellent three-year stretch for Gunston, in which he picked up an AA blazer in 2018 and slotted 51 goals for the season. He also finished equal third in goals for the 2020 season.

Whilst his Hawks struggled, Gunston’s efforts in a team that was not providing him with good service were admirable. He is a strong mark, turns on a dime, and is deadly from the set shot.

It was no surprise when teams started making inquiries about his availability following the 2020 season, but as a 29-year-old with 208 games and 398 goals to his name, he was deemed a required player for the rebuilding Hawks.

And I reckon every Hawthorn supporter out there is grateful that he is still in the mix in 2021.

He may have fallen over under the pressure of the Levi Greenwood tag in the 2020 finals, but Tim Kelly has had a spectacular three seasons in the league. Finished a disappointing seventh in the 2020 Eagles best and fairest, but his two second-place finishes in Geelong’s Carji Greeves Medal in 2018/19 as well as his 2019 AA selection hold him in good stead.

I’m a big believer in giving players a year to to adjust in a new environment. He was never going to come into an established West Coast midfield and play the sort of football Geelong needed him to when he was there. This season was about finding his way in the new system, however, with injuries to key mids, Kelly was forced into a more substantial role.

I get the feeling 2021 will be the season we start to see him return the Eagles’ investment in him. A top-three finish in the John Worsfold Medal and evidence of breaking a couple of tags would be a good result.

Probably doesn’t get anywhere near enough recognition, but he is the heart and soul of the Collingwood midfield, doing the hard stuff on a weekly basis. He picked up his first Copeland Trophy in 2020 which sat nicely alongside his All-Australian selection.

Prior to the 2019 season, some labeled the Magpies midfield as the best ever assembled. Sidebottom, Pendlebury, Treloar, Beams, and Adams were supposed to wreak havoc on the competition. However, things didn’t quite work out that way, did they?

Adams lived up to his end of the bargain, working diligently to lead the Pies in disposals, clearances, and tackles – finishing top ten in the AFL in all three categories.

With the Pies having to offload Treloar in the 2020 off-season, Adams now assumes more responsibility. Pendlebury and Sidebottom are still classy, but with both over 30, Adams is the future of the team, and possibly the next captain.

Ryan surged in 2020, picked up the Fremantle best and fairest, an All-Australian selection as well as the Mongrel Punt Defensive Player of the Year award. It was a monster season from Ryan and his high ranking is entire;y justified based on one of the better defensive seasons the Dockers have seen.

Ryan was the glue that held a ravaged Freo defence together in the wake of injuries to Alex Pearce (again) and Joel Hamling. Some may have considered those two the Dockers’two most dependable backmen, but that perception will have changed now.

Luke Ryan did everything for his tea. He played one-on-one defence, rebounded, intercepted and floated in to aid with spoiling whenever he could. In a defence that should have been much weaker, Ryan led a combination of Brennan Cox, Ethan Hughes, Taylin Duman, and Nathan Wilson to a very respectable season.

How good can he be with Pearce and Hamling around him for support? Hopefully, we get to witness it in 2021.

Harris Andrews may have been able to dislodge Luke Ryan for the Mongrel Punt Defensive Player of the Year if not for a hamstring injury, but as it stands, he finished in second place. However, he did enough to earn his second-straight All-Australian selection at full-back, which buoyed his ranking.

Andrews remains the best consistent spoiler in the game, despite Liam Jones topping that category in 2020. Andrews has the ability to control the defensive fifty and has emerged as the general of the Brisbane defence in the wake of Luke Hodge’s retirement.

He holds the record for the most spoils/one-percenters in a game, with a monstrous 25 versus Sydney in 2018 and with games back to normal lengths in 2021, perhaps he could give that record a shake once more.

Whilst the Lions have a very balanced line-up, there is an argument that he is every bit as important to their current success as Lachie Neale.

A fantastic season by Steele saw him earn the respect of the football world, including a top-five finish in the MVP race, top five in the coaches’ award and the Brownlow. Add to that his first AA selection and a St Kilda best and fairest and you can see why he jumps straight into the rankings at such a place.

In the same vein as Elliot Yeo at West Coast, Steele is a midfielder who does not shirk his defensive responsibilities. After leading the league in tackles in 2019, he backed it up with a fourth-place finish in 2020.

A heart and soul player, the work of Steele elevated those around him as the Saints followed his lead and found some semblance of success in 2020. His ability to not only win the footy, but curtail the influence of his direct opponent made him one of the most valuable players in the competition.

With the addition of Brad Crouch, it will be interesting to see whether Steele’s workload increases or decreases in 2021. Last season, the Saints toyed with playing Seb Ross as a defensive midfielder – what a luxury to have – but if required, Steele is able to apply the clamps and play either as an attacking mid, or as a lockdown tagger.

Let’s face facts – Cripps did not have his best season in 2020. He was hurt, kept playing and produced at a level less than that which we’re familiar with. Sure, he was still good enough to finish third overall in clearances and seventh in contested possessions, but there were no All-Australian selections for him last season, no high finish in the coaches votes, and because Carlton STILL haven’t had their 2020 best and fairest presentation, we can’t count that either.

So, Cripps is still in this position due to his blistering form over 2018/19.

In that period, Cripps picked up the MVP award, two best and fairest awards and a matching two All-Australian selections.

With his shoulder operated on following the 2020 season, Cripps should be cherry ripe to regain his status as the league’s best inside bull. Carlton has picked up Zach Williams to help him out in the midfield as the Blues finally look ready to mount an assault on September.

So much of that depends on the form and fitness of Cripps – he is as important to this Carlton team as any player to any team in the competition.

He is riding high on his brilliant 2019 numbers that saw him ranked number one this time last year.

Whilst Grundy was still able to lead the league in hit outs, his influence around the ground was limited. Whether that was due to injuries or form, the fact remains that his reduction in production negatively impacted the Collingwood team.

Grundy went from 14th overall in average clearances in 2019 to 70th in 2020 which probably illustrates his fall from grace. Perhaps it was the reduced game time that prevented Grundy from running his opponents into the ground the way he did in 2019? Or perhaps he was playing more like a bloke who just signed a big long-term deal than one who was trying to acquire one.

Regardless, Grundy will need to recapture the elite form he demonstrated in 2019 and in the Round One destruction of Tim English in 2020 if we’re going to see him crack the top ten again this season.

And there we have it. Cripps out of the top ten? Jack Steele surging and last year’s number one player dropping to eleventh place after a less than great year. Looking forward to the top ten? Let the complaining begin!

Any tips for number one? Rank your top five? Come on… stick your neck out and have a crack!