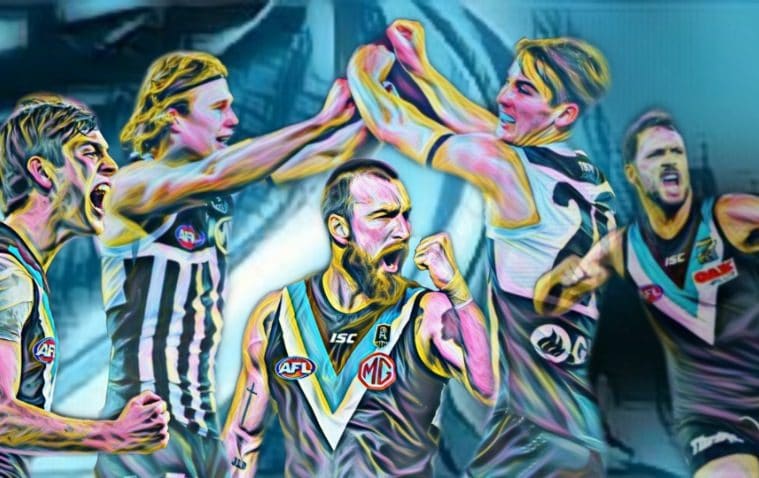 The Power To… Go One Better?

In 2020, one of the biggest stories was the meteoric rise of Port Adelaide from being perennial middle of the table team to a genuine premiership contender.

They’re a tough mob at Alberton – defiant and proud. In their 150th season, the Power ignored the predictions of many and stood up under trying circumstances to finish top of the ladder. Only a tough defeat at the hands of the eventual premier, and one of the best teams of the modern era, prevented them from heading to the Grand Final.

But with the perception that their best players over the age of thirty, can Port Adelaide back up and hit 2021 with the same intensity as they did last year? It was as though the Port Adelaide Football Club welcomed the unique challenge 2020 threw at them. They looked adversity square in the eye, gave it a cheeky wink and took it on.

There is no question that Port Adelaide entered the 2020 season intent on making every post a winner. From the outset, they established that they were in no mood to play games, destroying the Gold Coast Suns by 47 points to claim top spot.

It was  spot they would occupy for the remainder of the year.

Things clicked for the Power in 2020, but to state that so simply would be to downplay the enormous effort the club put forth, and the huge amount of pressure Ken Hinkley was under coming into the season.

Those without the memory of a goldfish will be able to cast their minds back to the 2019 off-season where, after another disappointing year, the tenure of Hinkley at Alberton was under serious threat. This was no rumour made up by a journo to create a headline; Hinkley was well aware that his backside was on the line headed into the season and only he and his charges could do something about it. He stated as much in a press conference, stating that unless Port played finals, he was gone. He also stated that they intended to win the flag… one of the last people to do that was Peter Schwab at Hawthorn in around 2004. Alastair Clarkson took over in 2005.

There has been much speculation over the years about Hinkley’s style, his game-day decisions and his coaching philosophy in general. Many reading this article would be forced to put their hands up if the question was asked around whether you would have liked to see the back of Ken at any stage over the last few seasons. Quite a few, I reckon. If the questions were being asked prior to the 2020 season, Hinkley answered them in emphatic fashion, and he was able to do this largely due to his veteran players stepping up their game.

Travis Boak had another fantastic season to finish a distant second to Lachie Neale in the Brownlow, but at 32 years old, there were plenty who thought Boak was on a downward spiral back in 2018. Those people have either conveniently forgotten about those statements or are hoping everyone else has.

Charlie Dixon made good on the promise he’d shown for years, putting the forward line on his back, as well as half the opposing defenders at times, to have his best contested marking season since 2017… in a season that had 20% less game time. For the record, he had 2.57 contested grabs in 2017 and registered 2.56 in 2020. For mine, we saw the best version of Dixon in 2020.

Ollie Wines worked hard to win back the respect of his teammates and supporters after the rumours of him entertaining a trade circulated following his poor 2019 season. Riddled with injury after injury in 2019, Wines put to rest the chatter about him skipping out on the team by re-signing with the Power. He also went ahead and reminded the footy world that he can still be one of the best contested ball winners in the game.

Tom Jonas assumed the sole captaincy and played like the solid leader he is, whilst the Power got a surprising boost from Trent McKenzie in defence, with the former Sun finally getting his body right to emerge as a valuable defensive unit. These are the kind of surprises that make good teams very good, and very good teams into great ones.

Darcy Byrne-Jones took his game to the next level, capturing All-Australian honours to go with his Jack Cahill Medal as Port’s best and fairest, whilst Karl Amon, Sam Powell-Pepper and Zak Butters, in particular, all played some of their best footy to propel Port into the finals. And as always, Robbie Gray did his part, slotting a goal after the siren to win the game against the Blues.

The Power avenged an early-season loss to Geelong by fixing them up in week one of the finals, before their second nail-biter of the year against the Tigers saw Richmond turn the tables and send Port crashing out the finals.

With a list boasting four of their best players over the age of thirty – Robbie Gray, Trav Boak, Charlie Dixon and Tom Jonas, as well as the handy duo of Hamish Hartlett and Tom Rockliff, some may think that Port is in a “win now or bust” window.

On the surface, those people may have a point.

But those people are probably also ignoring the crop of talent coming up underneath.

We all saw what Connor Rozee was capable of in 2019, but a plantar fascia injury limited his capacity to build on his electrifying first season. He was still very serviceable, but whilst he chugged along, the just could not reach the heights others expected of him.

Luckily, the Power have Zak Butters, who basically switched positions with Rozee in the young player pecking order to establish himself as one of the most exciting talents in the league in 2020. It was not just his play that commanded attention – Butters was a pest. He was overly physical with the big blokes, overly lippy with established players and perhaps overly confident in his abilities at times?

Nah, scratch that last one – his abilities are wonderful. He can be as confident as he likes in them.

Never has it been clearer that a player was special than when Butters roved a Scott Lycett tap in the forward pocket so perfectly that he did not break stride to slam through the sealing goal in Round 13 against the Hawks. Mind you, the tap from Lycett was brilliant, but the hands and timing of Butters provided a moment of air-punching brilliance.

So, the strengths of this side are apparent, but those who sit idly by and wait their turn to win a flag never really get to hold the cup aloft. It just does not happen that way. Improvements must be consistently made and the Power were no different coming into 2021.

They recruited Aliir Aliir from Sydney, who had spent the better part of the last two seasons refining his role as an intercept defender. Deceptively quick and powerfully built, Aliir can ease the pressure on the sometimes-undersized defence comprising of Jonas, Tom Clurey and Trent McKenzie. His power and ability to crash packs will add a little bit more to a Port Adelaide defence that was already one of the best in the game.

At the other end…I’m not as convinced with their recruiting, but it may not be as important, anyway.

Orazio Fantasia pissfarted his way around the Essendon Football Club for the better part of the last two seasons. Adding little of note to the team on-field, his greatest accomplishments in 2019-20 were correcting the mispronunciation of his surname, copying Conor McKenna’s disastrous blonde dye job, being repeatedly pinched by Ben Stratton, and falling into a heap on the turf after a slight bump from Robbie Gray.

Oh, and he also attempted to facilitate a trade to Port after the 2019 season before backing out at the last minute, annoying Port officials and further adding to the perception that he may be a few sandwiches short of a picnic. Fantasia will have his work cut out for him in 2021. If he can get fit, get his head in the game and hit Round One motivated, he could be a huge boon to this team, but if Port get a replica of the bloke that has done bugger all at Tullamarine for the last two years, Orazio better get used to playing SANFL.

Where else can Port Adelaide improve?

The battle for the second marking forward spot will be interesting, with Todd Marshall now having Mitch Georgiades nipping at his heels.

The Power have been patient with Marshall, with ‘Sticks’ being allowed time to find his feet after sadly losing both parents in quick succession a couple of seasons back, however they are a club on the cusp of something great and need to do what is right for the entire team. Georgiades showed some definite x-factor in 2020 and will no doubt challenge Marshall for that position. If Sticks isn’t careful, he may find himself out of the side before he knows it – he needs a big year.

Xavier Duursma should be better in 2021 after a hamstring injury early in 2020 put him behind the eight ball in regard to match fitness, whilst Willem Drew could add some real Mongrel to the Port midfield if he is allocated some defensive matchups.

Miles Bergman didn’t get a run in 2020 after being picked up with pick 14 in the 2019 draft, but you’d expect him to push for selection, but the biggest improver in the game could be Rozee. We still don’t know what his ceiling is, but it is safe to say it’s pretty bloody high!

As stated above, he was limited by injury in 2020 yet was still highly effective, saving one of his best performances for the Preliminary Final. If he hits the season at peak fitness, it’ll be time to cue the Rozee v Walsh debate once again and possibly time for a people to change their minds again.

Port Adelaide shocked more than a few in 2020. Many had written them off and used the very same pen to jot down Ken Hinkley’s obituary, but the team showed an enormous amount of heart to not only play well, but be the best team in the game for a large portion of the season. They handled the hubs, handled the travel and handled some of the best teams in the game along the way.

How they perform in the 2021 season will be one of the more intriguing aspects of the year. Are they a one-and-done team? Did they get up for the big 150 year celebration? Or did some players put in their best pre-seasons in 2020 only to fall away this year?

Port Adelaide’s window should not close after 2021. Unlike Geelong, their young brigade has more than just a couple of potential stars to work into the positions that will be vacated by their ageing stars. This team, managed well, could be around the top eight for quite a while, and if they’re able to harness the passion that drive them to such a fantastic 2020 season, they have the potential to go one step further in 2021.

I would not be agreeing to attend any weddings in late September if I were a Port fan this season.