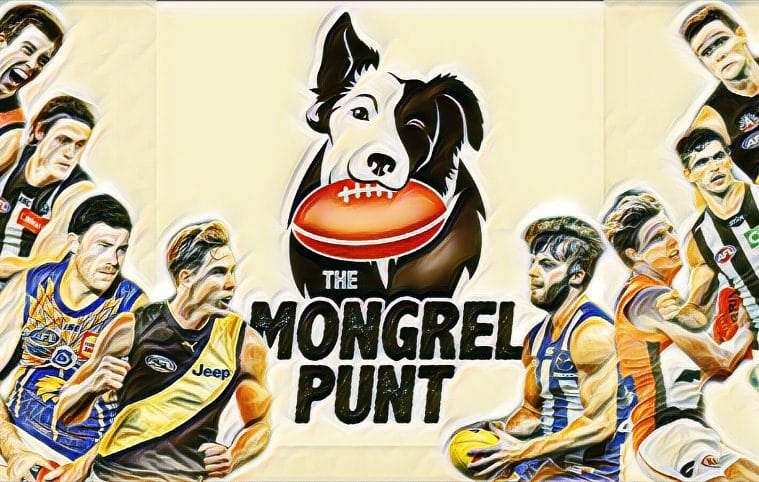 The countdown continues in Pre-season edition of The Mongrel 50.

If you missed the intro and the long-ass preamble last time around, you can get it at the link below.

Winning the Best and Fairest in a premiership year is something that is held very highly in AFL circles. Performing at your optimum as the team gears up for a run at the flag… it gives a player a certain air – an aura that they were a huge contributor in the team’s overall success.

And that is what Jayden Short brought to the table in 2020.

Powering the Tigers’ transition from half-back, the long-kicking defender would often find himself with the footy in hand in a chain of Richmond possessions. His delivery forward gave both Tom Lynch and Jack Riewoldt every opportunity to win contests and his ability to do so whilst covering a lot of ground was the best in the league.

Short led the Metres Gained category in both totals and averages in 2020 as he often looked to get the ball over the top of the zone. And he often succeeded, too.

Moore’s first All-Australian selection and a ninth-place finish in the Mongrel’s Defensive Player of the Year award saw him vault over many others to land in the 50. Moore also picked up points in the Copeland Trophy count, finishing fourth.

There was a lot of debate about whether Moore or Jacob Weitering should have been the All-Australian centre halfback in 2020, but given the attacking aspect of Moore’s game, I reckon the right decision was made.

Heading into 2021, Moore is one of the Magpies that re-signed with the Pies. It was obvious that he, Grundy and de Goey were the priorities this off-season and anything else was collateral damage. After several seasons where his body let him down, the risks were pretty big.

Darcy seems to have his body right and if he replicates his 2020 form in the coming season, he will be tough to displace from the AA CHB slot. He might even notch a Best and Fairest of his own. His old man snared two of them, though matching the two Brownlows may be a bit of a stretch for the young fella.

It was all previous years, sadly. Cunnington dropped 21 places in this year’s list due to an injury-ravaged 2020 season.

The Kangaroos were a shadow of the team they thought they’d be last season and a large part of that was Cunnington sitting out with a debilitating back injury. There is no question that with him controlling the middle, the North Melbourne midfield walks taller. He is strong on the inside, a clearance specialist and sets the other mids off and running as he farms the ball out to them.

He also takes the heat off young blokes like Jy Simpkin and Luke Davies-Uniacke, who can develop at their own pace without being asked to cover the position as the ball-winning clearance player.

If Cunnington is fit in 2021, the Roos are a vastly improved team. Of this, there is no question. He is a quiet leader at the club, but one who the younger players cannot help but follow.

Merrett had a top ten finish in the 2020 Coaches Association Player of the Year award and also slotted in second place in the Bombers’ best and fairest award.

I reckon there are a handful of players that could lay claim to being amongst the best outside runners in the game and Merrett would be right in the mix. Not to blow our own horn, but during the season, we have a weekly wingman rankings column for members. Last season, Merrett had the highest individual round score of the season when he played the position and two of the top six scores of the season. He is a master at finding the footy and creates play for his team.

Sadly, the Bombers needed him in the centre square too often. Otherwise, Merrett was well-poised to challenge and topple Sam Menegola as the wingman of the year.

Whitfield had a nice balance of points spread across previous seasons as well as a best and fairest win for the Giants (tied with Nick Haynes).

His 2020 took a long while to see him settled. Thrown onto the wing, into the middle and to both half forward and half back flanks, Whitfield was finally able to settle into the role of running rebound defender late in the season. Sadly, it was too little, too late to save a GWS season that read like a story featuring Joe Ganino, a laptop connected to the internet and a jar of Vaseline – yep… it was pretty messy.

There is no question that Whitfield can be a devastating weapon in any one of the positions he was trialled in last season, but if he gets a clean run and is allowed to own a role, a run of All-Australian selections is on offer.

He’s in here based on previous seasons – that’s it.

Gov was well down on the form that saw him rack up four-straight All-Australian selections, with injury dropping him back to the pack a little.

Dropping nine places, perhaps 2020 is the kick in the pants McGovern needs hit 2021 in great condition and regain the form that made him the most effective intercept mark in the game? There is really no reason why he couldn’t reclaim that mantle, is there?

Gov is a beautiful reader of the footy – so much so that opposition teams had to formulate ways to enter attacking fifty whilst avoiding the possibility that he could float in and completely destroy the opportunity. In recent seasons, there have only been two players that have seen teams adopt that tactic. They were Alex Rance and McGovern.

With a return to form, McGovern could match Rance with five AA selections and given his importance to the Eagles, seeing him back in form could see the Eagles return to being a legitimate contender.

A second place in the Collingwood best and fairest, a nice amount of carry-over points from his stellar 2019 season and a 2020 AA squad selection see Pendles retain a place in the top 50.

At 33 years old, Pendlebury is still the most damaging Magpie midfielder with the ball in hand, is still able to make time seemingly stand still and still brings those around him into the game time and time again.

How long Pendles can go on at this level? And how long do Collingwood require him to?

At some point in 2021, Pendlebury will move into the number one slot for most handballs in the history of the game. He also sits in the top ten all-time for disposals, tackles, clearances, contested possessions, uncontested possessions and goal assists. How ridiculously good is that?

Equal sixth in the 2020 Coleman Medal and some nice carry-over points from 2019 see Lynch just slightly fall this season.

Tipped by many to be the leading goal-kicker of last season, Lynch was actually not even the highest contributor at the club when all was said and done, but his contribution cannot just be measured by how many goals he snagged.

Lynch put on the black hat last season and incurred the wrath of the football public, who called for him to be suspended for each and every indiscretion from the Richmond forward. I have to say… the way he embraced that persona and then threw it back in the faces of critics with his act of kindness towards a distraught Port Adelaide supporter following the Prelim… it made me like the bloody bloke!

The transition from Riewoldt to Lynch as the number one forward at Tigerland is complete, irrespective of goal totals. He has emerged as the man in the Richmond forward fifty and I get a feeling we have only scratched the surface as to what Lynch is capable of.

A fantastic 2020 saw him place fifth in the Mongrel’s Defensive Player of the Year award as well as earning himself a Syd Barker Medal as North’s best and fairest.

McDonald showed some considerable versatility in 2020, playing both the role of tagger to great effect and then slotting into defence to take rebound the footy, McDonald was rarely beaten and was one of the shining lights for North.

He sat eighth in total rebound fifties for the season and in a year where the Kangaroos really struggled, he demonstrated a cool head under pressure. One of the success stories of the Rhyce Shaw tenure, it will be interesting to see how he adjusts to David Noble in 2021.

His position here is all due to the work from Brown’s previous seasons, with 60+ goals in three consecutive years prior to collapsing in a heap in 2020.

Brown’s move to Melbourne will be very interesting to keep an eye on. The delivery he received in early 2020 was atrocious and that, accompanied with a confidence that was slowly eroding, saw Brown kick just eight goals from nine games – the first time he averaged under a goal per game for his career.

Now, he suits up for the Dees, who aren’t exactly known for their precise delivery inside 50. Has he jumped out of the frying pan and into the fire? I reckon we’ll know by Round Five.

Before I sign off, perhaps a quick look at some who just missed out on the top 50 this season.

The Eagles had three just miss the cut, with Elliot Yeo’s poor 2020 hurting him, whilst Tom Barrass and Brad Sheppard were both very unlucky.

Mongrel favourite, Sam Menegola, almost cracked the 50 on the back of his huge 2020 season. What a shame he didn’t get the much-deserved All-Australian nod, huh? Would have put him over the top.

And one more at random – Dane Rampe sat just outside the 50; obviously his season-ending hand injury prevented what looked like an AA selection and could have cost him Sydney’s B&F as well.