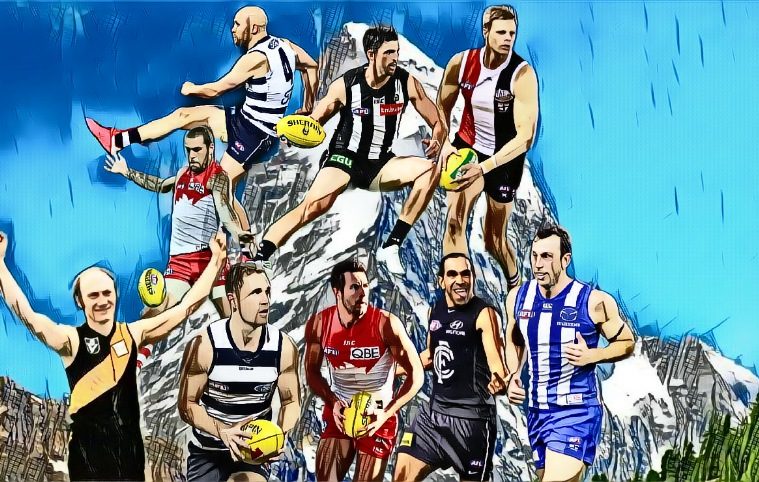 Records and Milestones in 2021

Records are made to be broken, and milestones are created to be surpassed.

I love looking at players’ places in the history of the game, and where their numbers stack up against their peers. Some stats, due to the way the game was played, will never be broken – Kevin Bartlett’s incredible total of 8293 kicks is 1940 ahead of the bloke in second, who was also pretty handy; Michael Tuck. There is no current player in the top 30, after Heath Shaw retired and finished up in 12th place.

He was still over 3000 kicks behind Bartlett.

As we head toward the 2021 AFL season at a rapid pace (73 days to go as of writing this), we’re all well aware of the big milestone that was once considered a formality.

Lance Franklin currently sits on 944 goals for his career. Even if he walked away from the game right now he would be remembered as one of the all-time greats, but that magical four-figure goal tally is tantalisingly close. Sadly, it has been close for a couple of years now. Some expected it to fall last year, but Franklin’s body betrayed him, and with the big fella playing just ten games in the past two seasons, things are not looking anything like a certainty.

With just one good year, Buddy could join the likes of Lockett, Dunstall, Ablett, Coventry and Wade. That’s some esteemed company, right there.

The equation is as follows – 56 goals are required. However, as easy as it seems for a man who once kicked a ton,  Buddy had 27 goals in 2019, and just 57 the year before as well. Whilst anything near peak Franklin walks the required number in by R15, the version of Franklin we’ve seen the last couple of years might struggle to get half way to the total before h we simply cannot go on.

Everything needs to go right from here for Buddy, but I am sure we’ve seen his more recent photos in various media outlets. It looks as though he’s been in a good paddock… and I know those paddocks all too well.

And while we’re on records and milestones, I have a few more you may be interested in.

Buddy already holds the record for career-clangers with 1097. Dustin Martin is the highest-ranked current player, with 971, and given you’d think Dusty has a few years left yet, he’ll probably get Buddy before all is said and done. Not exactly the record he wants, but hey… he does have the record of three Norm Smith Medals to hang his hat on, as well.

Gary Ablett retired as the most prolific handballer in the history of the game, finishing his career on a huge 4201 handballs. It was great to see Gaz go out ranked as the best of all-time in that category, but his time at the top will be short-lived.

Scott Pendlebury is currently just 19 handballs behind the ‘Little Master’.

By Round Three, you’d reckon Pendles will officially be the most prolific exponent of the handball in the history of the game.

Ablett ffinished his career ranked second in inside 50s for his career, sitting 20 behind the incredible Brent Harvey. Boomer’s 1639 inside 50s are 345 ahead of the highest-ranked current player, Patrick Dangerfield.

Gaz has another record tucked under his belt as he wanders off into retirement, leading the all-time rankings in contested possessions with 4000 over his career – quite the contrast to the way some choose to portray him as a player who ran around the back collecting easy touches, huh? Josh Kennedy in Sydney is second with 3716 and then Paddy Dangerfield slots in at third with 3636 – he appears the… err, danger to Ablett’s reign in this department as he should play for another few seasons.

Eddie Betts currently sits as the career leader in goal assists with 305 and looks set for a long reign at the top. Betts is a clear 45 ahead of the next best bloke (Ablett) and all the other contenders amongst the modern players are well into their thirties – Robbie Gray, Scott Pendlebury, Joel Selwood and Tom Hawkins range from 74 to 79 assists behind Betts.

As much as we laud Betts for his creative goals, perhaps it is time we start to acknowledge more of his playmaking for others. The proof is in the pudding, and he might add a few more in 2021 for good measure.

Joel Selwood is just 34 tackles behind all-time leader, Matt Priddis on 1629 and, even if he ends up playing more outside this season, should be able to catch and pass him pretty easily. Selwood notched 63 in the Covid-impacted 2020 season, so assuming the 2021 season is able to run at, or near normal standards, Selwood will go down in history as the greatest tackler the game has seen.

I’m writing about him a lot, but Pendles currently slots in as fourth overall with 1532 tackles. He is just one tackle behind Gary Ablett for third place and us a statistical beast.

In terms of clearances, Sydney’s Josh Kennedy is 125 clearances behind Sam Mitchell. He’s currently third (behind Simon Black) and had 118 in 2019 before picking up just 56 in 2020. Do you think he can play a full season in the guts for Sydney in 2021? He’ll need to if he wants that number one all-time spot – his best overall season saw him net 191 in 2016. This one might be a bit of a stretch given he is 32, but he is a warrior, and it wouldn’t surprise me to see him push on past 2021 and end up number one.

And what sort of freak was Riewoldt?

Nick Riewoldt’s career 645 contested marks looking unassailable at this point. What a shame this stat wasn’t recorded earlier to get the best of Carey and Lockett.

Nick Riewoldt also leads the all-time marks inside 50 with 1017. Buddy is 102 behind him in third (Barry Hall slots in at second), whilst Jack Riewoldt is a further 102 behind Buddy in fourth. This record is safe as houses for quite a while.

Todd Goldstein is 433 hit outs behind Aaron Sandilands for the most hit outs in history. The big Kangaroo had a n excellent season in 2020, particularly early, and notched 472 in the shortened season. By the end of the 2021 season, The Todd should be the number one ranked ruckman in terms of raw numbers.

Only five men have ever cracked 6000 hit outs – Shane Mumford sits on 5990 as we head into what has to be his last season. To put things into context, Mummy is ranked sixth with that total. Goldstein and Sandilands are both sitting with totals over 8000. No other man has cracked 7000.

Brodie Grundy has amassed 4800 and registered 593 to lead all players in 2020 following two seasons of 1000+ hit outs. He should be the number one man by the time he is finished.

Daniel Talia currently sits in sixth place all time for one-percenters with 1459. He is 109 behind second-place Dustin Fletcher and considering that Talia had 80 in the shortened 2020 season, he could jump into second place in 2021. Another decent season in 2022 would see him catch Josh Gibson, who sits atop the heap with 1690.

Interestingly, 24 year old Harris Andrews is already sitting 30th all-time. Even with a repeat of his 2020 season, he would jump to around 12th overall. Good health permitting, he could be the all-time leader in just a few years’ time. Crazy, huh?

Finally, Joel Selwood is the only current player ranked in the top 30 for free kicks-for. Joel sits in 14th place, but with just 20 in 2020 (career low), even a repeat of that performance would see him jump a couple of spots.

So there we go. A bit of movement at the station in our all-time categories.  Got any you think I may have missed? Happy to chat about it – I love this kind of stuff.