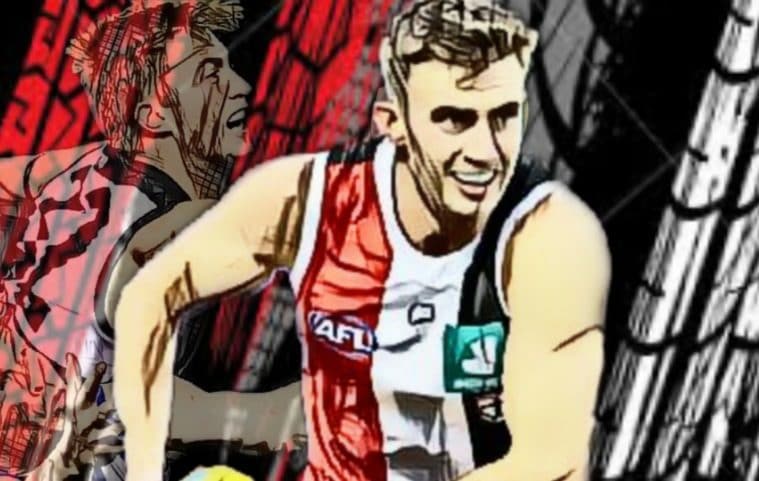 When St Kilda went on a recruiting spree following the 2019 season, there were several scenarios ready to play out.

The first one saw the team struggle as they adapted to the new arrivals and saw two of their experienced players (Jack Steven and Josh Bruce) head to other teams.

The second scenario saw the team start slowly and take time to find their feet, with players trialled in several roles before settling into position. The team would then rally late in the season and set themselves up for a solid 2021 year.

And the third saw the new arrivals click into place like they belonged there and the Saints benefitting immediately.

The third scenario seemed the most unlikely. Teams take time to build chemistry and develop cohesiveness between players on the field. 12 months into his North Melbourne tenure, his teammates were still compelling Jared Polec to run past and receive handballs despite being on his wrong side – things take time. However, the Saints were very close to achieving that third scenario and shocked many in AFL circles with how well they adjusted and performed over the course of the season.

Dan Butler burst out of the gates and, despite a season with reduced game time, managed to achieve career-high numbers in goals and tackles (both in total and inside 50). Butler was incredibly unlucky not to make the All-Australian team, particularly with midfielders once again taking flank and pocket positions away from those who plied their trade there all season) and emerged as the match-winner on several occasions.

Paddy Ryder did with the Saints that which he was unable to do with Port Adelaide. Teaming seamlessly with Rowan Marshall, Ryder showed up in excellent shape and provided an excellent one-two punch with the emerging big man. His hamstring betrayed him in the finals, but his influence on contests was undoubted.

Zak Jones hit the ground running and was the best-performed of the new Saints early in the year. His hard, burst running adding to the St Kilda midfield. When he was allowed room to move, the Saints looked brilliant.

Brad Hill was the one to let the recruiting team down. Struggling to find his feet as well as the football, Hill averaged a career-low 2.4 contested touches, seemingly waiting for his teammates to do the work for him. Yes, he is an outside midfielder, but he is still required to win an occasional one-on-one contest. I was not a fan at all of people blaming his teammates – he is not a first-year player who needs to rely on others to feed him the footy. He is a premiership player and the Saints should demand a lot more from him in 2021.

But I don’t want to get bogged down in what wasn’t great in 2020. There was plenty that was fantastic to focus on.

There is one more recruit that stood up in 2020 and made a statement. Dougal Howard moved from Port Adelaide alongside Paddy Ryder and proceeded to establish himself as St Kilda’s number one tall defender in the process.

And he is just getting started.

Allow me to regale you with a tale of two defenders.

Plus you help us grow. Come on… click the image below and help us make this the footy site you want it to be.