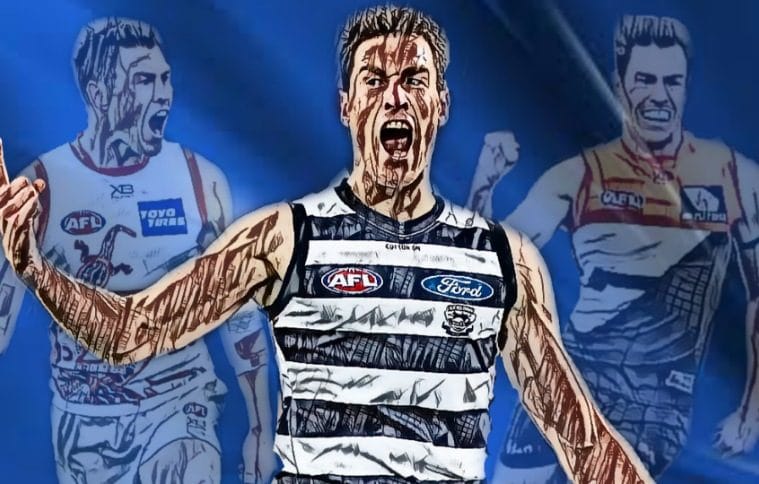 I had to smile when it was announced that Jeremy Cameron would be wearing the celebrated number five guernsey at his new club in 2021.

The number worn by club legends, Polly Farmer and Gary Ablett Senior will be on the back of the former Giant star as he adapts to life at a new club and attempts to become the missing piece to the Geelong premiership puzzle.

Like those who wore the same number before him, the spotlight will be well and truly on the 27-year-old as he comes off close to the worst season of his AFL career. The hope is that he finds his feet quickly and forms the kind of one-two punch that teams dream of. The combination of the last two Coleman Medallists playing on the same team is a tantalising prospect for Geelong fans. Having toiled away with the wildly inconsistent pairing of Esava Ratugolea and Gary Rohan sharing the role of the number two marking forward position over the last couple of seasons, the Cats now find themselves with two of the most potent weapons in the game.

Hawkins was a monster in 2020. His sheer size and ability to win battles of strength forced defences structure up around him and even when they did, it was often nowhere near enough to halt him. We saw him tear Port Adelaide apart in one of the Cats’ more impressive wins, but when things got tight in the finals, he was up against it. Under the finals spotlight, the defences collapsed on Hawkins, forcing him out wide (v Port Adelaide) to take his shots, or compete against two or three in the air (v Richmond). What he really needed was someone else to earn their keep and play a significant role for his team. He needed someone else to step up.

But the combination of Rohan and Ratugolea stepped in a different direction. They stepped aside.

With Cameron coming on board, there will need to be a major shift in the way opposition clubs structure up their forward line to combat one of the more formidable duos in recent history. With quarters going back to 20 minutes plus time-on and the restrictive 2020 season behind him, Cameron’s elite running ability and penchant for leading right up to the wings before doubling back toward goals should become a more potent weapon than it was this season.

It kind of has to, because in 2020 it was a weapon that jammed, misfired and refused to fire a shot.

The Cats are buying potential and memory in bringing Cameron on board. If they are to get the 2019 version of the former Giant, then they will be getting an absolute bargain, even considering the draft picks they were forced to hand over to acquire him. There was talk about him being a 100-goal kicker as late as 2019. Remember that?

Through the first seven rounds of 2019, JC snagged 32 goals. He was a machine and seemed on a mission to that point.

As always seems to be the case, as soon as the media jumped on board the Jeremy Cameron express, it was derailed. He went goalless in the next two games and the talk of the first triple figure season since Lance Franklin in 2008 quickly faded.

Finishing with 76 goals for the year, Cameron had four bags of 6+ goals, including nine against the Suns, which basically put him in the position to win the Coleman. It was the season people had been expecting from Cameron for years, and it it’ll be the season the Cats would love from him in 2021 – not in terms of sheer goal numbers; that won’t happen playing alongside Hawkins, but in terms of impact, it would be the ideal result for the Cats.

But there is this problem that really isn’t being addressed at the moment. Jeremy Cameron absolutely stunk in 2020.

Recently, I started to look at which players were the most disappointing in 2020. Initially, I just started making a list, but in order to give it a little credibility, I started to weigh up who had the highest expectations and at what level they failed to deliver.

Far and away, Jeremy Cameron was the most disappointing player of the season.

After averaging 3.17 goals per game in 2019, his average dropped by over half, finishing at 1.41 per contest. Now, there are some players that would take those numbers, but for Cameron, it signalled a career-low result.

And that is cause for concern.

I am sure there are many who expect Cameron to bounce back into prominence, as though a change in jumper colours is the panacea to all that was ailing him in 2020, but here’s a scary “what if…” for Cats fans – what if you’ve bought the 2020 version of Jeremy Cameron and paid 2019 prices?

Yes, working with Tom Hawkins means that he doesn’t really have to kick 70+ goals be a success – the combination SHOULD work well, but if we get the 2020 version to team with Hawkins, I’m not so sure things will be as peachy-keen as some believe.

In a nutshell, Jeremy Cameron dogged it in 2020. Whether he wanted to be part of the Giants or not is something only he truly knows, but he sure as hell played like a guy who didn’t want to be out there. His second efforts were horrible. His defensive pressure inside 50 continued to be poor, and his trademark long leads up the wing were few and far between. In short, he looked lazy and barely interested.

Yet, he somehow managed to escape the scrutiny that comes with failing in the AFL. He was able to stay under the radar because the AFL media does not give the same coverage to GWS as it gives to the “bigger” clubs.

He will not be afforded the same level of leniency at Geelong.

In many ways, Geelong is like a big team in a small pond. They’re a team in a smaller market but that market is absolutely rabid. But what the Cats do have is a great media profile in Victoria and an open premiership window – with that comes scrutiny.

A Jeremy Cameron who cannot clunk a mark inside 50 (career-low 1.2 per game in 2020) and is simply not doing the team-first things (career-low 4.8 score involvements in 2020) will not be allowed to sleepwalk his way through the season with being held to account for his lacklustre performances.

No AFL player should be afforded that privilege, but Cameron seemed to receive it as part of the Giants in 2020. New captain, Stephen Coniglio copped it from the media, but Cameron was given a free ride.

But this is where the free ride ends.

Expectations are high of Jeremy Cameron in 2021. He has the benefit of working with one of the biggest defensive heat magnets in the game, in Tom Hawkins. He has been given what he wanted – a move to Sleepy Hollow where and Patrick Dangerfield can go fishing until their hearts are content. And he has gets a chance to start over new after the worst season in his career.

Have we already seen the best of Jeremy Cameron, or will this move revitalise his career? Can he be the missing piece that sees the Cats finally make good on the promises of glory that have been within reach over the past couple of seasons? Or will he wilt under a spotlight a little more intense than that which he is used to.

Geelong gave up a fair bit for him. If he shows up in 2019 form, they have enlisted the services of a superstar. If he turns up and plays like he did in 2020, they’ve bought a lemon.

Cameron may think he is moving to a team where the pressure is spread across several superstars, but if he felt the heat in the small market of GWS, things are about to get a hell of a lot hotter in 2021.

Can Jezza go from the frying pan into the fire and escape without being burnt?

And for that matter, can the Cats avoid being burnt in the process?