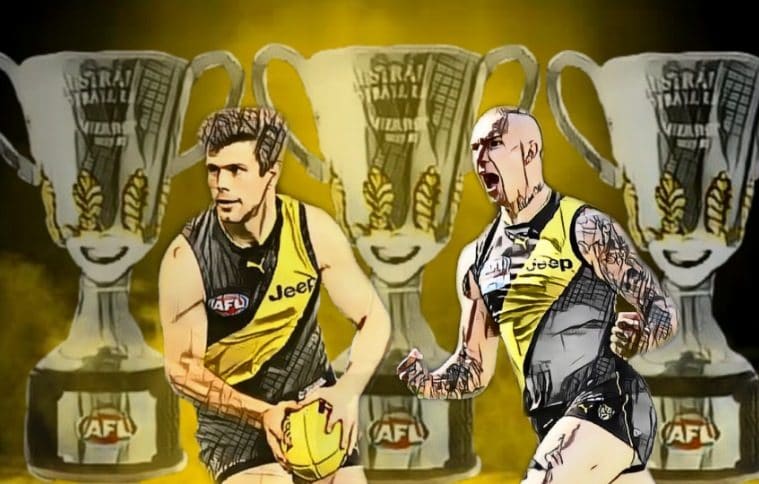 A Dream For Some. A Nightmare For Others – A Richmond Three-Peat?

As we look forward to the 2021 season, we once again find ourselves forced to view the league through a yellow and black lens. Like it or not, Richmond reigns supreme and has done so three times in the past four seasons.

I used to love watching the wrestling when I was a kid – I was always drawn to the heels/bad guys and I’d always love the way Jesse Ventura would justify their actions and talk them up on commentary. To many, Richmond are the current heels of the AFL (although Collingwood may be making a move to steal that title after the trade period). They’re the bad guys. They’re the team people love to hate.

Success will do that.

It used to be pretty cut and dry in terms of wrestling, with clearly defined good guys and bad guys. It was like a western in the ring – the good guys wore white hats and the bad guys wore black. It was easy to distinguish and we were easily led in whatever direction the promoter would like us to go. But lines became blurred in the mid-to-late 90s. Good became bad and bad became cool. It happened on television as well – the characters were no longer simply good or bad. No black and white – just shades of grey. Game of Thrones, Breaking Bad, The Sopranos.., the rise of the anti-hero was undeniable.

Football was always a little easier. You found the teams you love to hate and that rarely changed. White hat v black hat. Good v bad. There has been a lot of jealousy over the Tigers’ success, and rightfully so. Everyone wants to be where they are; winning flags and breaking hearts. Let’s be honest – they were easy to dislike for the majority of the football world – a team of winners shattering the dreams of others, with some bending rules as they went.

However, over the past few months, we’ve seen a bit of a turn from the Tigers. Whether it was Tom Lynch consoling a crying Port Adelaide fan after the 2020 Preliminary Final or the entire team removing their premiership medals to stand in a guard of honour for the retiring Gary Ablett, Richmond have started to make it difficult to dislike them. More so, they have made it impossible to not respect them.

I can just hear the gravelly voice of Jesse Ventura commentating a Richmond team running out onto the ground – “You may not like them but you’ve gotta respect them.”

I can’t see how Gorilla Monsoon could oppose him. God, I miss that old school wrestling.

Whilst the new season prompts hope and high expectations for a number of teams, there is a story arc ready to play out before our eyes in 2021. And that is the story of the Richmond Football Club’s desire to be hailed as the greatest team of the modern era. Whether you love or loathe them, there can be no mistaking that this club stands on the precipice of true greatness.

Just where do these current Tigers sit in terms of the great teams of the modern era right now?

Are they within reach of the three-peat of the 2001-03 Brisbane Lions? Are they a match for the 2013-15 Hawks, or does that 2018 Preliminary Final loss to Collingwood place them a slot below these two great teams?

And where do they sit in comparison to the Geelong team that secured three premierships from 2007-2011? The 2008 Grand Final loss to Hawthorn doesn’t seem to have damaged the memory of that fantastic Geelong team too much, has it?

Are the Tigers at the point where they can finally put to bed the memories of that loss? Do two consecutive flags in a row not already do that?

Richmond now sit at a point where their greatness as a team simply cannot be denied, but it is the level at which they are situated amongst the Hawks, Lions and Cats that is still up for debate.

There is something special about winning three flags in a row. It leaves no room for the doubters, no room for questions, and no room for people to point out weaknesses. Hawthorn’s 2012 Grand Final failure before they embarked on their dominant premiership run is barely factored in when contemplating their greatness. Brisbane’s 2004 capitulation to Port Adelaide doesn’t particularly rear its ugly head when their run at the top is discussed. Those losses are cast aside as insignificant in light of the incredible success the teams enjoyed before or after.

And the fact that the Tigers are in the hunt up to their eyeballs in 2021 could have them regarded the same way in a matter of ten or so months.

More often than not, success in the AFL is fleeting. Historically, teams have been at, or near the top one year, only to tumble down the ladder the next. Adelaide, Melbourne, GWS and the Western Bulldogs have all crashed back to earth after a year at the top of the tree. One successful season can mean quite a bit, or nothing at all without being able to repeat the success season after season. However, for four seasons in a row, we’ve seen the Tigers sitting at, or very close to at the top of the tree. In terms of contemporary teams, they really only have the three I mentioned above as their genuine peers. The Adelaide Crows’ back-to-back flags in 1997-98 were an amazing achievement, as were the Kangaroos’ 96 and 99 triumphs.

But in terms of the greatest since the league ditched the V and became the AFL, we speak only of the Cats, Hawks, Lions… until now. With three out of the last four premierships… this Richmond Football Club enters the 2021 season with more than adding just one more premiership on their mind.

In 2021, Richmond are looking at cementing a legacy.

Whilst I am sure we’ll hear the clichés throughout the year, there is no doubt that players, officials and supporters will allow themselves to wonder about what might be. With a premiership in 2021, they are looking at a three-peat of their own; one that may elevate them not just to the level of those Hawks and Lions, but vault them ahead of the Voss and Hodge-led superteams.

If we are looking at any sense of normalcy in 2021, with games played at regular intervals, in front of supporters and with the Tigers securing home games, Richmond have to enter the season as favourites to win a third successive flag. Employing a style that others have yet to successfully combat when it matters, Damien Hardwick’s team is capable of extracting match-winning performances from players like Kane Lambert, Dion Prestia, Shai Bolton, Jack Graham and Trent Cotchin.

They are capable of game-winning, or game-saving moments from Nick Vlastuin, Tom Lynch, Jack Riewoldt and Dylan Grimes. They have young talent capturing the imagination of the footy world, such as Noah Balta and Shai Bolton. They are far from the Dustin Martin show that people would like to label them as.

Although you could argue that they are the Dustin Martin show when it matters most.

When the finals roll around, assuming the Tigers are in the top eight, they automatically vault to favouritism. Irrespective of where they sit on the ladder in 2021, their brand of footy is made for the pressure-cooker that is the AFL finals. It’s tried and proven and has been too much for the other contenders.

The question is – who can stop them striding into history? Who can halt their progress en route to being hailed as the greatest team of the modern era… and perhaps one of the greatest of all-time?

Port Adelaide went closest in 2020, knocking over a depleted Richmond in a belting home and away season clash before pushing them to the limit in the Preliminary Final. The Brisbane Lions finally broke a losing streak to register a win against the Tigers, only to crash out of the finals against the Cats. And Geelong has loaded up for one last tilt with Selwood, Dangerfield and Hawkins adding Jeremy Cameron, Shaun Higgins and Isaac Smith to the mix in an attempt to get over the line.

From the outside looking in, the Tigers appear to be the better club overall against each of them.

Port will get improvement from the kids they have plundered from the draft, although one has to wonder how long Travis Boak and Robbie Gray can continue playing at an elite level. Did they grow an extra leg for their 150th celebrations, or are they the real deal ongoing?

Brisbane seem to have too many players go missing in big games to be the team that displaces the Tigers. Will they be able to carry Hipwood, Rayner and McStay through a finals series with two of the three falling over as often as they stand up? And will Joe Daniher make the difference, or just provide another who sits on the sidelines squanders shots at goal?

How about West Coast? In truth, they have underachieved since their 2018 flag, with their first week capitulation in 2020 robbing us of the possible Eagles v Tigers finals encounter we’ve looked forward to for a couple of seasons. Could their precision overcome the pressure? Or have they missed their opportunity?

Richmond may no longer be the bad guys they were at one stage. Some may have seen them in a different light over the past three months. As we head toward 2021 (it’s December, people!), there may even be some of us that wouldn’t mind witnessing a little bit of history in the making.

Does a third flag in a row vault the Tigers past the other three-peat teams of the AFL era? And what would a fourth premiership do to the standing of players like Martin and Cotchin in terms of the way they’re perceived by the wider footy community?

We’ll all be barracking for and supporting our own teams in 2021, as always, but just for a moment let’s assume we have Richmond in the Grand Final playing someone you don’t support – do you want to see them upset, or do you want to see a little bit of history created?

“You may not like them, but you’ve gotta respect them.”

Jesse was spot on.