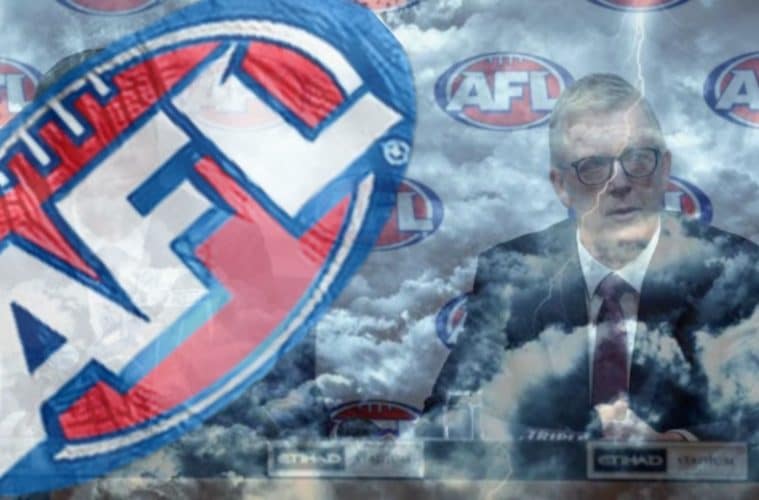 Changes – For The Better?

I should add a bit of a disclaimer about this article. There will be a fair bit of “old man yells at cloud” about it, but in this case, if we can just take a second to replace the cloud I’m yelling at with a picture of Steve Hocking and his rules committee, I reckon it’s justified.

The AFL Operations Manager (and he does manage… he has “managed” to cock up the holding the ball rule last season) has unveiled his most recent set of rule changes and tweaks to be implemented for the 2021 AFL season.

After a season where everything was not as it should be and we had the rug constantly pulled out from under our feet, not only as supporters, but as a football community, the last thing we needed was a host of rule changes, mostly non-trialled, to make things even more confusing, right?

There are people whose job it is to tweak rules, and people need to be paid. As such, we have some new rules to get our heads around, become infuriated about, and laugh about as the AFL rolls them back to leave the game where it was before they implemented them. Oh, and not to mention how they will completely confuse the poor umpires forced to judge whether or not someone is “moving laterally” a little too much on the mark.

On that note, let’s jump in and take a look at the new rules, shall we? Let’s have a bit of a gander at what they mean to the game going forward, or backwards as could very well be the case.

So, where is the actual proof that reduced rotations will lead to a better quality of football? Are we going to look at 1992 as the era of football we want to get back to? I don’t think that’s such a bad idea on the surface – I loved early 90s footy, but the game has evolved, tactics have evolved and the way teams control the footy has certainly evolved.

We look at a reduced rotations rule as a way to limit the number of times players can sub off for “a rest” yet the league has not officially increased the actual game time back to the same level it was prior to the shortened season? So really, this rule change is reflective of the number of time players spend on the park – not as a way to limit actual interchange. There will be roughly the same frequency, just in quarters that are marginally shorter.

You are aware that we may not be going back to 20-minute quarters plus time on, right? I wrote about that last season, intimating that there are those at the AFL who have wanted to institute less game time for years.

They finally got their way with COVID, and once instituted, there are some who didn’t want it to go back. They don’t want a marathon – they want a sprint.

There are always those who want to manipulate the situation to favour them or their agenda. The AFL, and those within wanting shorter quarters have done exactly that, and with everything else going on, they slipped in a mention that we may move to 18 minute quarters. Due to the fact it was a slight increase on the 16 minute quarters of 2020, everyone just accepted it.

In truth, it was underhanded and they should be held to account for implementing these shortened games by stealth.

For mine, it’s 20 minutes plus time on or its a watered down version of the game we love.

If there is one part of AFL Football that I really adore, it is 50 metre penalties for minuscule rule infractions. We love it, don’t we? After the game, we sit around with mates, or in my case, start reviewing the contest, and the first thing that jumps out to me isn’t the great running goals, the thrilling high marks or the gut-busting breaks from the pack that sets a team alight… no, no, no.

I am most interested in players infringing the protected zone, or stepping one foot over the mark, which awards the other team 50 metres. It’s absolutely thrilling stuff!

Now, with this rule instituted, we’ll get to see EVEN MORE 50 metre penalties.

A bloke takes a step sideways on the mark… that’ll be 50 metres. What a highlight of our great game, huh?

So, let’s look at the reasoning behind this. Is it to increase scoring? It has to be – that’s what the AFL wants, right? After a season where we saw some teams struggle to hit the scoreboard for entire halves, the league is desperate to implement something (seemingly anything) to bump up the scoring (except reinstating longer quarters, which I always thought allowed teams to attack whilst their opponents were most fatigued). What better way to bump up scoring averages than to take a bloke from 70 metres out to 20 metres for something so bloody innocuous that we wouldn’t really even notice it if the whistle didn’t blow?

We then received some clarification around this rule yesterday, with old mate Hocking stated that the player infringing must stand the mark.

I have a couple of questions, here. What if the infringing player is injured? What if it is a downfield free kick? What if a player genuinely does not know the free kick was against him and trots off? Do we hold up the game until he is brought back to man the mark? That would actually impede the team with the ball!

I have not heard these concerns addressed as yet. Can you guess why? Because they haven’t bloody thought it through, that’s why!

Then we have to factor in the players who run a “natural arc” on their kicking. Remember that? We haven’t heard much about it because Buddy Franklin has not been on the park for a while, but plenty of them do it. Are the umpires going to call play on immediately when a bloke does this? Are they going to call play on when a bloke marks inside 50 and starts to turn inside to sneak a metre or two on his angle? If not, it will leave the player on the mark standing there like an idiot, unable to move as his opponent gets a few steps head start to run around on the arc.

Of course, coaches are not fools. They will adapt quickly, and if I can think of ways around this rule quickly, I am positive they’ve already formulated plans to bypass the new interpretations.

Simply moving a few metres back from the mark would enable a player to then move laterally without punishment, however this is very different to everything players have been taught their entire footballing lives. It may take a little getting used to. The club that does this best in the early stages of the season may benefit with a win or two due to preventing easy scores. Clubs that don’t have this covered off well will suffer, and you know what happens when a club is being belted by a new rule change?

The AFL will panic and roll it back, just as they did with the holding the ball interpretations last season.

I give this until the end of Round Four before the league caves into public pressure and realises that copious amounts of 50 metre penalties, even when resulting in higher scoring, are definitely not what people want to see.

Wow… we could have had some clarification on holding the ball, a clear definition of what the umpires are being told to pay/not pay, or a clear and concise system for the score review rather than throwing it back to “umpire’s call” when the umps obviously have no real idea about it, but instead, we have the player on the mark for kick ins pushed back five metres.

Good to see the big decisions being made.

What does it mean?

Well, the league really seems to want defences to be able to clear defensive 50 really easily, don’t they? You’d be backing players who take the majority of kick ins to all occupy a spot in the top 20 in the league for metres gained, further reducing the vlaue of a stat that can end up being relatively worthless at times, anyway.

If a player turns the ball over inside 50 from a kick in from this point in time, he should be dragged. Given you can run from the square (seemingly as far as you like at times) without kicking it to yourself, you have 15 metres of space between you and your closest opponent, and you should be able to kick 50 metres at least. This allows teams to be 70-75 metres away from the goal mouth with one kick in.

Of course, this will draw the opposition to congregate around 60-80 metres out, and an intelligent coach will be able to poke holes in that 30-40 metres range in order to free players up. Which leads us to…

– Three players from each team inside 50m arc (one in goal square) for all kick ins and throw ins.

So, this one is to prevent flooding the defence. As a forward pushing up the ground, if the ball goes out of bounds or through for a point at the other end and you’re stuck up in the centre, you have to run back to be located inside 50 before the throw in.

It’ll be a little comical to watch, and will probably see one umpire of the three on the park continuously having to police it – I’m calling it now; four field umpires in 2022.

Does this rule bring back the era of the stay at home forward? I’m sure that the league is hoping so. I’ll believe it when I see it.

So, what are your thoughts on these rule changes? If they were ever going to leave the game alone, this would have been the season not to implement any changes. After such an upheaval due to lockdowns and hubs, the game needed a bit of a breather.

Instead, this is what we get.

Hit me with your thoughts