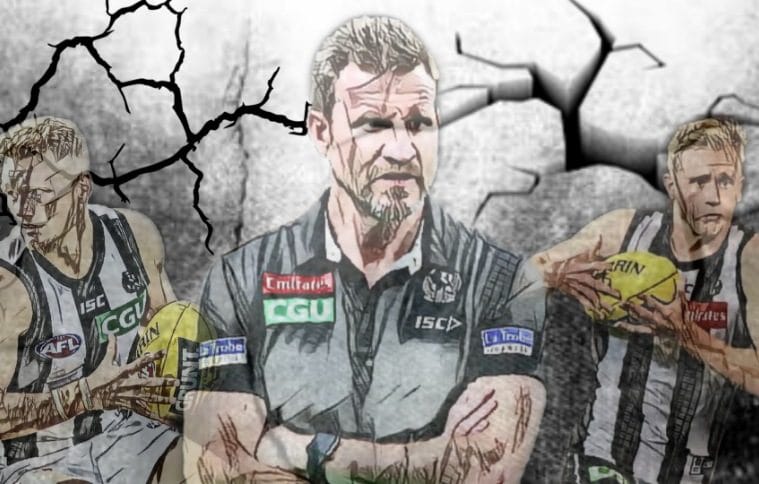 We were well on the way to completing his redemption arc in 2018.

Nathan Buckley, the man who demanded so much from himself as a player, his teammates and eventually, those he coached almost completed a startling transformation from someone viewed at times as self-absorbed and egotistical to the premiership coach everyone respected.

Hell, people even liked him.

He went from being the FIGJAM to being recognised as one of the better people managers in the game.

Yes, we were well on the way.

Watching him embrace his son in the change rooms following their huge 2018 Preliminary Final win over the Tigers was another part. The raw emotion and the relief that showed just how much something like that meant not just to the club, but to his family resonated with many.

Seeing Buckley take the time to console a Collingwood Cheer Squad member after their banner tore on Grand Final day was just one part of it. This was a high tension moment, minutes before the biggest game of the season, but Buckley, seeing the supporter in distress, made his way over and let her know it was all okay.

Then, in defeat, he took time to sit with runner, Alex Woodward after it appeared as though Woodward may have impeded the progress of young Collingwood star (at the time) Jaidyn Stephenson at a pivotal point in the game. Buckley consoled the runner and assured him it was not his fault. In a moment where the pain and anguish of a narrow Grand Final loss must have been tearing away at him, it would have been easy to point fingers. It would have been easy to channel the anger and take it out on others, but the way he focused on those around them, helping them begin the healing process, further enhanced his stature in the game.

Moments like these endeared Buckley to the AFL world.

His weekly interviews with Gerard Whateley allowed us all an insight into how Buckley operates not just as a coach, but as a person as well. He was articulate, compassionate, well thought out and intelligent in the way he answered questions and addressed issues.

But that was then.

2020 has been a strange year and for the Collingwood Football Club, just as it has for everyone. With issues surrounding lockdowns, hubs, “half-naked” players in trouble and coaches off playing around with tennis stars, it ended on a note as sour as you can get. After a stirring win in the Elimination Final over West Coast, the Pies were unable to back-up, and fell in a heap against Geelong.

So comprehensive was their defeat in the second week of finals that only a four-goal last quarter added any degree of respectability to their score. With just one goal from two scoring shots at three quarter time, the Pies were cooked and so, it seems was the playing group in terms of unity.

But if that loss was viewed as bad, the 2020 trade period was an unmitigated disaster for the Magpies.

Revelations that Adam Treloar and Jaidyn Stephenson were told to find new homes rocked the club and upset members. The pair were joined by Tom Phillip and Atu Bosenavulagi who were forced to make room for the re-signing of Darcy Moore, Brodie Grundy, Brodie Mihocek and the expected signature of Jordan de Goey.

Buckley called the last day of trade period the “toughest day in footy… bar none” in a tweet, but the fallout from it must have been just as hard to deal with.

When asked, point blank by Whateley whether he actively drove Stephenson and Treloar from the club, Buckley was frank.

“Yes, we had to. The conversations were pretty short and sharp.”

And just like that, if there was any lingering doubt, Nathan is no longer the nice guy coach. In the eyes of the public, no longer was he the hero. He threw on the black hat and took the heat that went with it.

In a phrase more reminiscent of a mob boss than an AFL coach, Buckley told Whateley that this was a business decision. If you can picture him looking at a Treloar, you can almost add the mobster accent. It’s not personal… it’s just business…

And Treloar was gone. Stephenson, too. Shipped off to the Western Bulldogs and North Melbourne, respectively – both unbelievably cheap bargains for those clubs, Buckley and his Magpies became the villains of the AFL they were born to play.

For the remainder of the interview, Buckley did a solid job of explaining his club’s motives and requirements. Ned Guy may have removed his foot from his mouth long enough to talk down the severity of Collingwood’s salary cap issues, but Buckley didn’t play the same game. He made no bones that money was the main issue in forcing players out of the club. He spoke about the need to address the issues now and not further impede their room to move and grow as a list in the future.

Believe it or not, it made sense. The Pies got an A+ for reasoning.

They also got an F for execution. The damage was done. No amount of damage control was going to fix it.

The supporters are angry and justifiably so. They have sat by and watched a team that was a kick away from a flag just two short years ago (and what a kick it was!) fall back to the pack and lose not only a proven star of the competition, but a young bloke whose ceiling is as yet unknown. Stephenson suffered a bout of glandular fever prior to the 2020 season, losing weight off an already slight frame. If you’ve never had glandular… it is no picnic and can leave you feeling lethargic for months.

That would probably go a fair way to explaining Stephenson’s poor 2020 showing.

The Magpies have built their culture on a “side by side” mantra. They have sung it loud and proud at every opportunity, but in the cut-throat world of football, there were tough decisions to make and they made them. Side by side… to a point.

Necessary or not, they made those clumsily and, some would argue stupidly, ending up with two first round selections – way down in the teens BEFORE academy selections are taken into account. Hardly an acceptable return for the likes of Treloar, Stephenson and Phillips in particular.

Success wallpapers over a lot of issues. Collingwood fans may be compelled to forget this off-season if the Pies rally and head to September 2021 with a head of steam. However, looking at the way things played out this trade period and listening to Magpie supporters vent their spleens about the mismanagement of their club – and it is their club – it would want to end in a flag in the next couple of years.

Anything less would see this trade period cast a dark shadow over the tenure of Nathan Buckley at Collingwood.

Even if he is wearing the black hat, given what he has offered this club, that’s probably not entirely fair.